The Little Egret on the Thames Shore 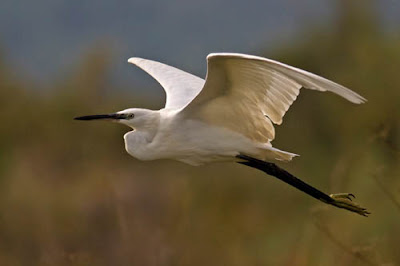 A wisp of white is slowly winging westward,
To where the sun surrenders its last light,
In gouts of scarlet and sacred golden shine,
Drifting over the turning tide and miring muck,
The egret in its winter finery, so strange in May,
Flaps elegantly in a whisper upon the wind,
To where the wilting waves, slither and slide,
Gurgling into the ebb of the sloughing Thames,
Whilst low shadows gather where twilight lies.


Gently it lands, so gracefully with delicate fans,
In a flamenco of soft feathers, an echo of Iberia,
Posturing for its attendants who line the banks,
Awaiting this late hour of sacred communion,
To gaze in awe upon its perfect construction,
As the street lights on the opposite Essex shore,
Glitter in a gush of night that sudden blacks the sky,
Whilst in the wild margins, Esus seeks new prey,
Searching for the stranded, who now fear his steps.


The spear of its neck slices apart the air in arcs,
Serpent swift its beak as it steps and stalks,
As sharp, swift and deadly as Toledo steel,
Piercing the thin silver meniscus, a revelation,
Like lightning flickering forth from a storm,
Seeking in the small cosmos of shallow pools,
A sacrifice for the moon before his return,
To the oak to which he is bound, and its fated branch,
Where once he hung, then in the form of a god,
Before the haunted cross had shadowed these shores.

Posted by Defender of Liberty at 13:45

Surely you'd prefer to shoot it.

It might menace the native indigenous thamesside working-class population, and shit on their gardens, steal their female birds, etc

Visitor to these shores said...

That looks tasty, where did you say you took the picture.