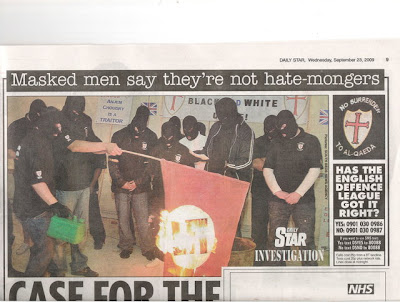 Image - here the EDL all stand around posing for nice pictures for the media in their black shirts and uniforms. Now the fact they are getting involved in politics means they can all be arrested for wearing para-military uniforms.

They are falling straight into the trap the media and the police are laying for them - and no doubt many decent real patriots will go down with them when the informers and touts and the idiots start pushing the EDL into politics. 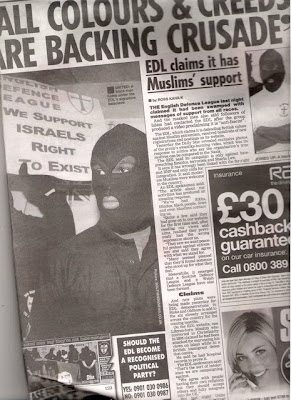 Image - note how the daily star are trying to get the EDL involved in politics and to stand as a political party. The moment they do they can be banned. This is classic media entrapment. And it appears they are falling for it. 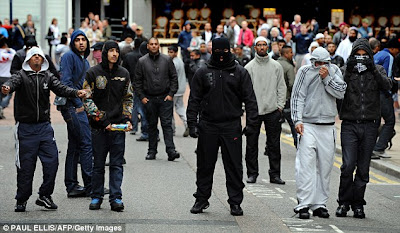 Image - photo of muslim rioters, yet this cropped image of the thug in the balaclava was touted in the Dail Star as a member of the EDL. Yet the EDL are wagging their tails with delight at the fact the Daily Star wrote an article on them. Never trust the media, the moment you do - youre screwed. 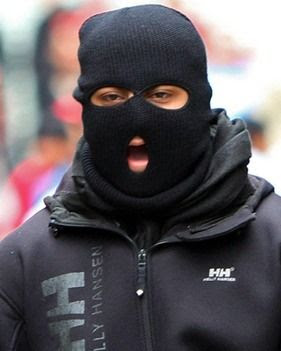 Image - example of how the media lie. The image above is a picture of a muslim rioter at the Birmingham demo, but the Daily Star said in the article here it was a member of the EDL ; 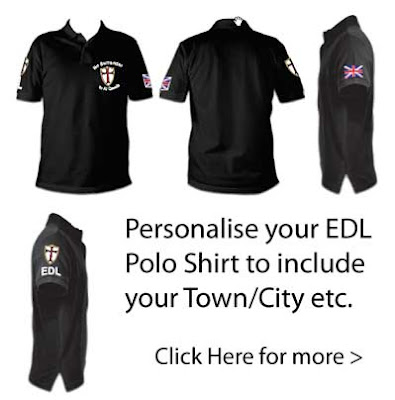 Image - EDL para-military clothing on sale on their website. The moment they get involved in politics the fact they have sold and worn these means they can all be arrested under the Public Order Act 1936.

It has been interesting to watch the growth of the EDL over recent months, and most interesting to see how it is now becoming under the influence of undercover police and government agents.

The recent article in the Daily Star where an EDL spokesman said that the EDL may get involved in politics is evidence of the fact that the organisation has now been infiltrated by the police.

The photographs of the EDL in the Daily Star article burning a swastika flag whilst various members of various races stood around in balaclavas and EDL black shirts with the same symbols on them reminded me of the UVF or the UDA.

Here is where the recent events get murky.

The decison by the EDL to get involved in politics means they are now in breach of the Public Order Act 1936 ;

2 Prohibition of quasimilitary organisations(1)If the members or adherents of any association of persons, whether incorporated or not, are—

(a)organised or trained or equipped for the purpose of enabling them to be employed in usurping the functions of the police or of the armed forces of the Crown; or

(b)organised and trained or organised and equipped either for the purpose of enabling them to be employed for the use or display of physical force in promoting any political object, or in such manner as to arouse reasonable apprehension that
they are organised and either trained or equipped for that purpose;

then any person who takes part in the control or management of the association, or in so organising or training as aforesaid any members or adherents thereof, shall be guilty of an offence under this section:

Therefore the recent announcement by 'spokesmen' of the EDL that they are going to
stand in elections, get involved in politics, have political aims, seek political goals etc means they are now an illegal unlawful organisation and its members and leaders - who wear, sell, display or promote para-military uniforms such as the ones they have been wearing in recent photographs - means they are liable to be arrested.

The fact that 'members' of the EDL are pushing the EDL towards POLITICAL gboals as opposed to solely opposing Islamic extremism means ;

1) The EDL are now an illegal organisation
2) The members and leaders can be arrested for terrorism under the revised Terrorist Act as they are undertaking 'terrorism' for a political motive
3) The EDL can now be arrested for selling, wearing and displaying para-military clothing and also acting as a private army.

The movement of the EDL into politics and away from protest, is either an act of utter stupidity or evidence of the infiltration of the EDL by undercover police who are working to get the organisation banned / proscribed.

That the EDL now seems to be going through a metamorphise from a protest group into a political group, at the same time as it seeking to expand, is no coincidence.

As long as it remained a single issue protest group against Islamisation, then it remains legal - the moment it embraces political goals it self criminalises itself.

As the police stated a few days ago, they cannot 'ban' EDL demonstrations as they are not POLITICAL events such as those of the NF - this was a clear signal to the EDL that they have appeared to have missed.

The moment they go political and start forming a political wing that stands in elections, campaigns on political issues, has political goals or a political agenda - they will be banned.

This is what the government wants the EDL to do.

It wants the EDL to become political as that way they can ban it, arrest its leaders and send a signal out to angry white youth and patriots that ' the minute you dare protest about what is happening we will smash you and jail you '.

This is why the recent announcements of the EDL that they are going to get involved in politics, with some reports saying they are even going to form a political wing to stand against the BNP in order to demonstrate their 'anti-racist credentials' to the media (who frankly dont give a shit - the idea the EDL or any political party or groups are going to be treated fairly by a media that is incapable of telling the truth is frankly evidence of their utter stupidity and gullability) is a sign the organisation is in crisis.

The burning of swastika flags and anti-racist placards and videos to woo over the media is simply evidence the people running the EDL know nothing about the media.

The media dont tell the truth lads - if the EDL was run by Bob Marley, had One Love as its anthem and waved the rastafari flag it would still be called 'racist' if it opposed Islamism.

Opposing Islamism means you will always be called racist by the media, the UAF and others.

This is because those people in the media who you seek support from, are PAID to tell lies and assist the Islamisation of Britain.

If you cant deal with then then get out of the EDL.

Stop acting like a bunch of big girls and getting upset because the media 'misrepresent' what you stand for.

The media misrepresent what everyone OUTSIDE THE CONFINES OF THE WHORES OF THE MAINSTREAM PARTIES STANDS FOR.

We hear that members of the EDL have been driven around Oldham and Manchester by chauffer driven limousines by the BBC - and no doubt these limousines will have been fitted with hidden recording devices and cameras to get the comments of the people in the car recorded for a future panorama documentary.

Undercover BBC journalists will already be in the EDL at demonstrations as well as undercover police - and they will be looking for evidence of a political motive in their activities in order to provide evidence to the CPS to ban the EDL.

The moment the EDL start licking the hand of the media they are lost - they will be used and abandoned by the media as soon as they have been filmed talking enough bollocks to get themselves arrested.

Last week Anti-Fascist Action in the UK was raided and its leading members arrested.

The only winner if the EDL goes down a political route is the government - and that is why various members of the EDL have suddenly started about politics.

It is those people, the ones in the ranks of the EDL who are talking about political goals, standing in elections and forming a political wing, who are the ones who will be working for MI5, Special Branch, the media and the police.

The EDL I suspect will start to implode the moment the media and MI5 agents in its ranks massage the ego's of its leaders to the extent that it loses sight of its original purpose - TO OPPOSE ISLAMISM and starts to get involved in politics.

The EDL must therefore be regarded with suspicion - as its transition into politics is either a result of stupidity at the top of the organisation or a sign of infiltration.

Either way Nationalists are warned to stay well clear of it, for it appears to be on a collision course with the law.

Posted by Defender of Liberty at 05:07

Lutonprotest said...
This comment has been removed by a blog administrator.
25 September 2009 at 17:13

I read your comment Mr. L P and I am glad that the EDL are not falling into the trap being set for them.

If the EDL stick to protesting Islamism, and dont get distracted by politics or trying to appease the media - who cannot be trusted, who will always misrepresent the EDL and who will set the EDL up - then the trap can be avoided.

There are many decent nationalists and good lads in the EDL and other similar groups who are truly committed to defending Britain from the Islamist terrorists and their UAF accomplices who surrender our liberties to the Islamists - and I personally dont want to see them being set up by the old bill or the media and sent to jail.

The EDL will need to understand that the police and media will now be infiltrating them and seeking to set them up - so they need to watch their backs.

But if they deviate from that core position of protesting Islamism then the public stop supporting them in their aims.

Stevie Wonder would see through this lot.