Nick Griffin and The Wizard of Oz. 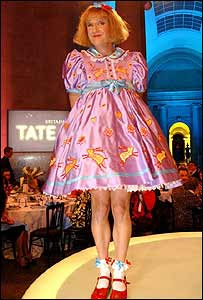 Image - Dorothy in the new Question Time version of The Wizard of Oz.


So John 'Braindead' Denham AKA 'The Iron Man' and Jack Strawman are to take on Nick Griffin on Question Time.

All we need know is Michael Heseltine as the cowardly lion, Harriet Harman as the evil pederast witch and Grayson Perry as Dorothy and we have the Wizard of Oz instead of Question Time.

No doubt we will have the UAF flying monkeys bussed in from the LSE and Oxford University in the audience chattering and running around attacking people at the behest of the evil witch and Mark Oaten of the Lib Dems as Toto the dog (he would like that) also in the mix and we have the full set.

The Wizard of Pox indeed.

Posted by Defender of Liberty at 03:56

Re: "So John 'Braindead' Denham AKA 'The Iron Man' and Jack Strawman are to take on Nick Griffin on Question Time"

Even when it's theirs.

I think Jack-the-lad will be known as Short Straw after this.

Into the Lions Den, I'm sure it will be a set up, but If Nick Griffin just keep s his cool, they will reveal their true colours to the Electorate.
Simple, plain, common sense answers, the country is full, we can;t afford any more, it's not Melanin I hate, It's Genocide.