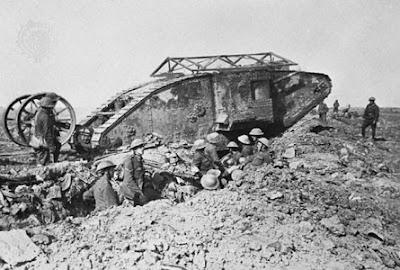 Crawling forth from the furrowed brow of man,
As a nightmare through sleep, slowly seeps,
Through tangled wires, snarls of thorn and steel,
Arise the machines, lumbering towards the front,
As a new wave of warfare is now unleashed,
For as a musket may evolve into a machine gun,
Death now finds itself a new form, in a new skin,
In order to kill with much greater efficiency,
The little people who bear the brunt of big decisions.
Over the top of trenches come strange creatures,
Behemoths of the battlefield, monsters of science,
Grinding cogs and gears, burning black smoke,
Spitting seeds of death upon caterpillar tracks,
With engines that crave war and hunger for oil,
Ravening the torn earth as wounded beasts,
They trundle towards victory atop fresh dead,
Feasting upon the mind, the soul and the heart,
Not just of the daily dead but also the living,
Who are left alone with just memories and letters,
As their consolation for the cost in shed blood.
Onwards will roll the machines until final victory,
Until the last drop of blood and last drop of diesel,
The final heartbeat and last gasp of the engine,
And then spent and broken, they shall rest and rust,
Until only the bare bones of their bodies remain,
Rusting iron innards and rotting steel skin,
Cold cadavers bereft of power, haunting the day,
As a place of pilgrimage to wave plastic flags,
Where holy relics of the war, parade once a year,
On wheels once again, now unable to walk,
Taken from containment in cells of forgetting,
To gain the applause of conditioned citizens,
Whose votes will soon unleash the next wave,
And each wave after that of the murder machines.

Posted by Defender of Liberty at 03:50