The Wedding of the Thames and Medway 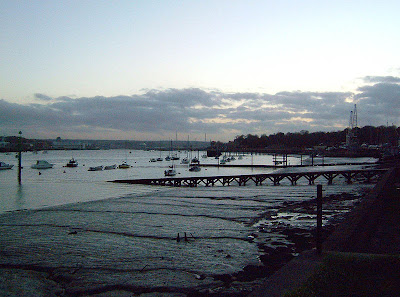 One sultry summer evening I set off to walk,
Along the winding shore line from Upnor,
Onwards past Hoo then out to lonely Grain,
That hides in a hamlet of haunted marsh,
To where the Thames and Medway merge,
And sit and watch the sunset over Essex,
Where the flames of that fast fading giant,
Are quenched in river mud and sandy shallows.

It was after midnight when weary I arrived,
At my destination and sat upon the bank,
Beneath a low moon and sky of sparkling stars,
Aglitter as cut diamonds upon black velvet,
So I rolled a cigarette and drew a slow draught,
Of cold Kentish cider from a brown clay jug,
I had left to float a while in a cool rock pool,
Just long enough to chill the sweet nectar within.

I gathered myself a rural bed from river rushes,
Which grow in profusion beside the shore,
Their heads swelling with lascivious seeds,
That rose from the cats tails to skim the moon,
So I plucked some of these simple sceptres,
Drizzled them with oil from my lantern,
Struck a match and set them sizzling as candles,
In a circle of fire around me, to banish mosquito’s.

I finished my jug and smoked a final fag,
Then lowered my head and closed my eyes,
And lay on my back upon the bull rushes,
To sleep in real comfort out in the open,
When out in the darkness I discerned singing,
Then joyous laughter and sweet music rising,
And I watched as a wedding parade appeared,
Led by dancers on the sand along the shoreline.

A noble king led the way, Father Thames his name,
With a retinue of knights in silver armour,
Carrying in his hand a white dragon war banner
Whilst carnyx in the guise of boars wildly blew,
Northwards towards a temple of white stone,
That stood in splendour upon a peninsula of sand,
Where awaited a fair maiden and her servants,
At the sacred wedding of the Thames and Medway.

Mistress Medway and her seven fair sisters,
Aided by their two loyal handmaidens,
Awaited within the sacred temple of Venus,
That was hidden unseen amidst the moist marsh,
In a sanctum of bliss between the black rushes,
Where the sacred marriage is consummated,
As the waters of the Medway flow softly,
Into the waiting arms of her husband to be.

Barges jostled upon the tide, tolling their joy,
And formed a watery wedding procession,
For the King and Queen were now wed,
And the holy waters mingled and merged,
Was this was real or a dream, I do not know,
For I watched as the scene faded before me,
Then drifted into sleep, as if sun drowsed,
Awaking in webs of mist and dew in the morning.

Posted by Defender of Liberty at 12:22

Labels: river medway, The Thames, the wedding of the medway and thames poem