The Taliban - Racists and Islamists 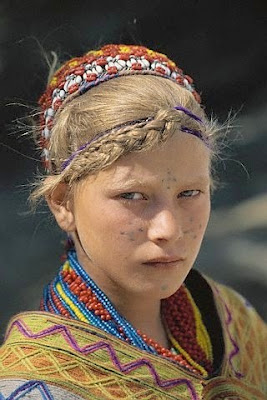 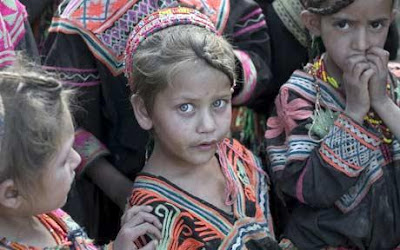 If we are to be in this war in Afghanistan, then lets at least protect the WHITE persecuted minority, the Kalash, who are not Islamists and who are descendants of our European kin.

Then at least some good might come out of this war, instead of our troops dying to impose a corrupt 'democracy' and dying for oil and gas pipelines.

For centuries, the blond-haired, blue-eyed people of the Kalash tribes of North West Pakistan have lived a libertine lifestyle.

The group, believed to be descendants of Alexander the Great's invading army, were shielded from conservative Islam by the steep slopes of their remote valleys.

While Sikhs, Hindus, and Christians were slowly driven out of Pakistan's North West Frontier Province by Muslim militants, the Kalash were free to drink their own distilled spirits and smoke cannabis.

But the militant maulanas of the Taliban have finally caught up with them and declared war on their culture and heritage by kidnapping their most devoted supporter.

They are now demanding £1.25 million and the release of three militant leaders in exchange for his safe return.

According to local police, it was Professor Larounis's dedication to preserving Kalasha culture that Taliban commanders in Nuristan, on the Afghan side of the border that made him a target.

Confirmation of the Taliban's role in his kidnapping came as their leader Mullah Omar urged American and Nato leaders to learn from the history of Alexander the Great's invasion of Afghanistan and his defeat by Pushtun tribesmen in the 4BC.

He was kidnapped on Sep 8, when five masked Taliban broke into the three storey museum where he was living, killed a policeman guarding the building, tied a teacher to a post and grabbed the professor from his bed.

Ajmeer Kalash, a Kalash teacher who witnessed the incident, said he had saved his own life by pretending to be a Muslim.

He said the men asked for his religion and "I told them that I'm a Muslim by reciting Kalma, though I'm a Kalash."

"They brought out the Greek national and they opened fire at his police guard. The policeman died on the spot. They took me and the Greek citizen to the forest. There they tied my hands to a tree and left me there and went away," he said.

Locals said the professor had been visiting the area since 1994 when he first came as a tourist and fell in love with the area's unique culture and its people's links to his own in Greece and Macedonia.

The Kalash are known as 'Black Kafirs' to local Muslims who regard them, and their women in particular, as immoral. They are scornful of their festivals and rituals, which include a rite of passage in which a prepubescent boy is fattened in the mountains over a summer and then when he returns is allowed to have sex with any woman he chooses.

Married Kalash women are able to elope with other men if the object of their desire accepts a written proposal and agrees to may double her dowry to the abandoned husband – often in cows.

Since his kidnapping Kalash women have demonstrated for his release, while elders have travelled to Nuristan to try to negotiate with his kidnappers.

Bit of a Dilema for the Liberal mind I imagine.
I suspect they will do as they always do simply ignore it.
Like when 1000's of girls a year from Britain are forced to suffer FGM.