George Monbiot - Death to the Usurper 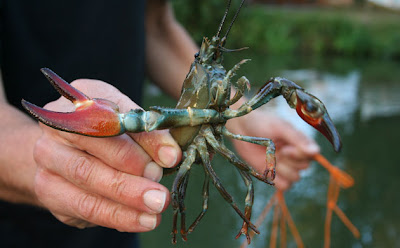 Image - North American Crayfish. Enriching a stream near you. Diversity in action.

I know I shouldnt as he is the epitome of the lefty Guardian knobhead, but he seems a nice bloke, sincere, affable and charmingly eccentric in a posh, English public school way.

Yeah I know he bangs on all the time about climate change, drowning polar bears, sun tan oil splashed penguins roasting in the Arctic that now resembles Ibiza in August (minus the drunk English hooligans - yet) and the rest of the international leftist (yawn) psuedo-green agenda whilst keeping his gob firmly shut about immigration whilst living alone on a rock in the mid atlantic surrounded only by Manx shearwaters and orcas and a friendly seal called Eric that catches kippers for him. Apparently.

Yet today he has written an article that is as Eco-Xenophobic as you can get, as it gives you a tip on how to to hunt, trap and eat North American Crayfish that have decimated the indigenous White Tailed Crayfish.

The North American Crayfish is the Mike Tyson of crayfish.

I am saying nothing governor.

But theres a phrase of his that I believe should be the motto of the Eco-Xenophobes everywhere.

I intend to use it more and when I do I will accredit it to George Monbiot ;

DEATH TO THE USURPERS !

You are a bona fide fruit loop.

I've tried very hard over the years to credit the BNP with good faith in its claims not to be racist or hiding unworthy extreme intentions. The only way for it to now regain/retain its credibility is for the author of this article to be expelled from the party, absolutely and for good.

Ha you are literally one of the most retarded idiots to have ever graced this planet with your incredibly useless and feeble existance. You are aware that the Guardian has printed this quite literally absurd article blatantly taking the piss out of you. Are you mental? Or are you just an incredibly stupid person?! You're an actual retarded gorrila. We're all laughing at you.

the fact you idiots are unable to understand SATIRE means the joke is on you.

Perhaps you ought to join the campaign against the new drug CAKE or the teenage craze for computer keyboard sniffing.

As for you Mr. Clarke, the very fact you are reading the Guardian, and repeating Ad Nauseam its rubbish, suggests either ;

Either way my response is simple.

The moment the Guardian starts saying nice things about the BNP, or nationalists in general, is the moment that British Nationalism is dead.

Those that seek the adoration of the media, are either fools or slaves.

The corporate media is the primary enemy of our democracy, and those that court it, are weak, untrustworthy and foolish.

Peronally I dont think any BNP members are dumb enough to think that the Guardian will print nice things about the BNP.

Therefore I expect you are nothing more than a troll.

Troll on, for I couldnt give a toss.

Hey Defender, Yes I read the Guardian website. But I wouldn't in a million years dream of paying to support its Islamophile rants and deceits. I entirely agree that it is propaganda trash (with rare exceptions).

It is just on the borders of believeability that LJB's words above were meant in satire. But if so it was spectacularly ill-judged satire, strongly seducing readers to the conclusion it was insinuating sincere but unstateable notions which Nick G and the party generally rejects. So the conclusion sadly has to remain the same. Sometimes one of the heroes has to be sacrificed for the greater good of the cause, yes?

Now I know your a troll.

This is my blog. Not a BNP blog.

The idea that we should have a 'satire' handbook that we should read before we make a joke is the sort of absurdity I have dedicated myself to fighting.

No nationalist would think that or say that.

We believe in total free speech, not a castrated version of liberal fascism.

Therefore you are a troll.

And as the old saying goes ' Dont feed the trolls'.

Well done Lee you have got the lefty loons in a tizz - LOL. Remember any other species can be assigned indigenous, i.e. the red squirrel - no problem so far. All human races can be recognised as indigenous, and you even get leftist retards campaigning on their behalf, i.e. "Free Tibet" - and yet there is one race that is not ever allowed to be recognised as indigenous - no prizes for guessing which race... the British folk of course.

Monbiot is of course like all typical lefties, completely delusional and will easily twist reality in order to justify his own belief structure. Science, what science - only when it agrees with their agenda.

"We believe in total free speech, not a castrated version of liberal fascism. "...

You didn't even hold your belief in 'total free speech' for a whole paragraph.

Go fuck yourself you liberal fascist.

Until then I shall censor you as you censor us.

That way you know how it feels to be censored you fuckers.