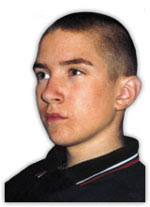 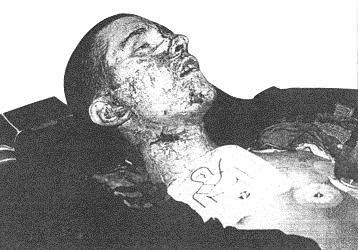 Image - Daniel Wretström, murdered by immigrants and reds aged 16. Seven of the people involved in the attack were accused, one of which was convicted of manslaughter and sentenced to psychiatric care. Three of the attackers were sentenced to forty hours of community service and contact with social services. Two others were ordered to pay 1800 Swedish crowns (about 200 Euros) in fines, and the last one was released on parole and ordered to pay 1800 crowns in fines.


Those who have experienced what it is like to be attacked by members of AFA or the thugs of the Far Left know that they are evil, sadistic cowards who are more then prepared to attack in a mob any nationalist they will see.

I have seen friends who I went with to various demonstrations beaten to a pulp by the AFA thugs, who are usually armed with weapons such as knives, screwdrivers and clubs.

These AFA thugs are the same sort of thugs in Europe, yet the European AFA mobs are a hundred times more violent than the British version.

In nations such as Germany and Spain you will be killed by them if they catch you alone.

When I was a lot younger I once got chased through London on the tube by a mob of reds, and luckily got away.

I knew though that these guys, mainly middle aged men, would have seriously hurt me if they caught me.

This is why I support Josue Estebanez de la Hija in his fight for justice.

The video of what happened to Josue can be seen here ;

Josue is a serving Spanish soldier.

He wasnt looking for trouble - they were, and they got it.

You can see Josue looking through the window and realising that he was cornered.

This is when he drew his army knife that he carried with him.

He didnt have the knife in his hand BEFORE the mob started to get ready to board the tube train he was on, he only drew the knife when he realised that he was cornered and that the mob had seen him through the glass windows of the tube carriage and were intending to enter his carriage.

He knew that his life was now in real danger from this armed mob.

He assumed they were armed, and he was right.

The video footage reveals they were carrying weapons and the testimony of a security guard at the scene states he saw the mob also carrying knives.

These were armed Red terrorists, and he was a lone nationalist.

On the video you can see the thugs board the tube train, laughing and looking at him as they realised they had trapped what they thought was a 'skinhead' on the tube all alone - and they were laughing at how easy it was going to be to attack him.

Then a couple of them notice that he is carrying a knife and they move away.

Why did they move away - because all of a sudden they realised that this peice of dead meat that they thought they could attack and destroy easily was able to defend itself.

Then one of the mob gets on the train and starts to question him.

This is always how such events begin.

Usually they begin with the 'Why are you wearing that top for. What are ya some kind of fucking Nazi or what you cunt', and then usually from behind someone punches you in the face or the back of the neck, you fall to the ground and the kicking begins, or you are headbutted and then the whole mob jump on you and the kicking begins.

The aim of the thug in the video who starts engaging him with questions, was so that other thugs could get behind him and launch an attack from behind or he was about to headbutt him and then the other thugs would jump in.

He didnt know though that Josue was carrying his army knife and that the other thugs had backed away once they had seen he was armed for self defence reasons.

Once Josue realised that he was trapped, he defended himself.

He knew he was boxed in, so he lashed out.

I fully support what he did.

The old saying, 'Better judged by 12 than carried by 6' is a maxim I endorse in such situations.

When you know you are trapped and that you are going to be attacked, then the best form of defence is attack.

Go for the biggest and the mouthiest as hard as possible, then the rest of the pups usually run off yelping when the top dog is taken down.

The rest of the video reveals how gutless the thugs were.

That is one brave kid.

Eventually the mob trapped him and beat him almost to death. Luckily he survived, but one of the thugs didnt.

A man died which is always a tragedy, yet if he had not chose that day to join with a mob of 50 thugs to hunt down and attack nationalists who simply wanted to attend a meeting then he would still be alive today.

He, unlike Josue, went looking for trouble.

He, unlike Josue, came out of the situation worse off.

On any other day anywhere in Europe, it would have been a dead nationalist on the floor.

This kid held his own and survived.

If the thugs had not been hunting down people to attack that day then their friend would still be alive.

Those that go looking for trouble, should not whine when they get it.

If you set out to hunt down and attack people, then you should expect people to defend themselves.

SELF DEFENCE IS NO OFFENCE.

On November the 11th 2007 a despicable extreme left-wing crowd entered the Legazpi tube station platform, in Madrid. They had clear intentions: to assault everyone suspicious of being “Spanish patriots” since at the same time, not far from there, it was held a meeting organized by a nationalist Spanish party allowed and legalized by the Government Sub-delegate’s Office. The members of the extreme left-wing and antifascist group only had in mind to storm the said meeting and attack the more people the better. Those were their intentions.

While this crowd took up the tube platforms heading to start violent riots, into one of the coaches it was Josue, a young man whose look could be taken as a provocation by the violent extreme left-wingers. Josue noticed immediately the serious risk for his life (a platform full of extreme left-wingers and antifascists looking for a victim). He was alone and outside the coach there were more than 50 people. He resolved to protect his life.

The doors opened and the coach was getting full of this despicable crowd. These misfits immediately detected Josue and were ready to attack and lynch him (in a tube CCTV video widespread by mass media you can see, on second 39, one of the extreme left-wingers located in front of the door drawing a brass knuckle; the rest were just laughing and looking daggers at him due to his look). Josue, in spite of he was ready to protect his life, tried to leave the place when all the extreme left-wing group got into the coach. But one of them, Carlos Javier Palomino, blocked the exit door with his arm and started to ask about Josue’s clothes.

Many of us know what’s happen next; many people know they’re not going to discuss about the International Socialism virtues or the nationalization of the banks. No. Many of us know the next step is a huge beating, a brass knuckle beating your jaw or your ribs and even a stab. That’s the truth. And Josue resolved he was not going to let them lead him to the hospital and go into a coma; Josue decided he was not going to be another victim, just like Eduardo Garcia Gelber, killed some years ago in Barcelona by an extreme left-wing group under similar circumstances. No, Josue resolved to protect his life.

It doesn’t matter if Josue was into a certain kind of ideology or not. If he liked football or bullfighting. Josue was quietly travelling by tube, ALONE. And he was harassed by 50 enraged antifascists who had only one motivation that morning: to face “fascism” violently.

Please, spread the truth of this case. Don’t let the information manipulation, the mass media trial Josue is facing and the hypocrisy displayed by Madrid extreme left-wing has no coverage among your acquaintances (relatives, friends, workmates…). They are playing with the life of a man who simply did what a good person would have done in his place: DEFEND HIS LIFE.

Posted by Defender of Liberty at 07:56

I tip my hat to the guy - he deserves a medal and you're totally right about those thugs. Nothing more than anarchists intent of trouble.

Above all else my heart goes out to Josue. Such a brave warrior against the massed coward horde. Thank God he lives and was not extinguished by that freak mob... and moreover he defied them. Josue is an inspiration... 50 against 1... is that what is takes????

The Communists all have one thing in common *cowards* they haven't got the intellect to debate with Patriots so they try to silence them with pack intimidation or violence, i hope this young boy gets justice but i wouldn't bank on it, please keep us informed Lee of any new developments...Donna

He has my undaunted admiration for standing up to the mob and by his principles.

Wonder whether saying he's just a guy who supports the national team and not a nationalist is best idea. Prove dishonesty here and the judge can lead the jury by the nose.

"Yes I am, I have my honestly held beliefs. I am a solid member of my country. Serve in the army, all these people love me. I know of X,Y,Z who were badly beaten, here they are on the stand. This is the situation in our country and the police and the media side with terrorists. I was faced with an overwhelming mob intent on committing at the least GBH and my fight or flight syndrome kicked in."

FUCK YEAH FOR JOSUE.! Sorry for the language, but that man deserves a medal.! You don't have to be a nazi or a racist or any of that to hate AFA.! AFA is a group of terrorists hiding behing their masks and so called "Peace". Why is is that people look at them like they're the good ones, but judge people who love their country and home.! If I would of been there Josue I Would Have been there for you...As I've heard and read you're a honest man.!!! I Respect your courage and strenght.! The sentence they gave you is fucking unfair, but I'm happy that you're Alive.!!!

spain is the only country where pedoflians, murderes, terrorists and robbers are in the streets while honored people is in jail.... is the world upside down.... FREEDOM FOR JOSUE!!!

thanks for your support british comrades, regards from spain!

Wow this young man is my hero. I wish him well from Texas.

JOSUE is a HERO. spanish nationalists should free hime right away. legaly he was in self defence. FREE JOSUE NOW!

I've just seen the video and can say that he did nothing more a patriot could do to protect his life and honour. Origin of bravery. And self defence in no doubt. FREE JOSUE!!!I wish him all the best from Russia.