Anti-Fascism is the New Fascism 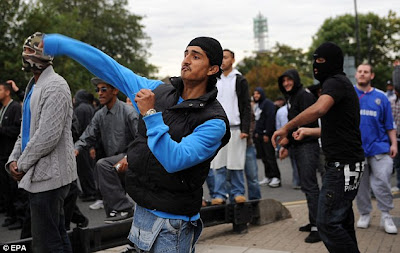 Image - The 'anti-fascists' showing their commitment to democracy and liberty by throwing rocks at people whose views they disagree with.

Winston Churchill wrote that ' The New Fascism will be Anti-Fascism '.

He was half right.

The New Fascism is Islamism and Anti-Fascism - the Stalinist Islamist Axis of Evil.

This Axis of Evil must be extirpated from our nation.

Blaming the members of the Stop the Islamisation of Europe campaign group for the violence yesterday is the ultimate betrayal of our nation by the maggot John Denham and the coprorate media scum that get the Dhmmi-liberals of the Tory and Labour parties elected.

WE LIVE IN A DEMOCRACY.

In that democracy protest groups are allowed to hold public protests to get their views across - the ONLY BLACKSHIRTS IN THIS COUNTRY ARE THE STALINIST THUGS OF THE ANL AND THEIR ISLAMIST MILITIA ALLIES.

They are the Blackshirts in our society - and John Denham and his fascist Labour government are the allies of the ANL scum and need the votes of the Islamist militias.

The police, stuck between the government and the ACPO New Labour puppets, are forced to deny us our democratic rights of protest and capitulate to the terrorist violence of the ANL and Islamists.

The corporate media serve the interests of their corporate masters, and Viscount Rothermere of the Daily Mail isnt going to let himself become hounded by Islamist terrorists like Salman Rushdie for telling the truth about the Islamists in our society - the cowardice of the liberal elite is amply demonstrated by the gutless surrender of principle by the writer Sebastion Faulks who criticised Islam one day and the next was praising it to the skies like a proper Dhimmi-Lickspittle.

The Establishment cower in their golden cages like frightened dogs, surrendering our liberties and democracy to the Islamists as though they own them.

The media journalist scumbags, who serve the interests of the Communist union The National Union of Journalists, and their corporate masters do as they are told - they lie page after page about the real situation in our country whilst peddling bullshit in order to ensure the masses are pacified and impotent.

John Denham is a New Labour scumbag, another lackey of the war criminal Blair and his pup Brown.

He is using the media to blame the victims, white people, for the violence we have seen in our society every time an anti-Islamist protest group dares raise their voice in society - so he is more than a liar, John Denham is also a racist liar.

He knows the ONLY fascists are the ones screaming Allah Akhbar, wearing Keffiyah's and throwing bricks, fireworks and punches at anyone who dares raise their voice in our democracy to protest the take over of our nation by the Islamists.

The members of the Stop the Islamisation of Europe are owed a great debt by the British people, for they have ripped the mask from the face of the snarling Islamo-fascists and their Stalinist ANL allies revealed to all our people the nature of the real enemy within.

These Islamist terrorists have been allowed to enter our nation, colonise it and spread their sickness with the blessings of successive British governments, for they held the gates open and invited these invaders into our nation, and they have protected them as they spread throughout our nation.

Islamic extremism is a sickness, a disease - and it must be treated as disease and cut out of our society and nation.

Those that hold those views are not British, they are colonists.

Therefore they must be removed from our society - either within prisons, detention centres or via deportation.

Those convicted of terrorism must be executed after trial.

Those guilty of funding, supporting or inciting terrorism must also be executed after trial.

The Dhimmi-Traitors in the media, the government, the political parties and the ACPO puppets are all complicit in the greatest treason in our nations history.

Posted by Defender of Liberty at 07:35

Antifascim is the new Fascism -

THis is all nonsence Lee,

They are here for one reason to undermine our national identity, to make way for the NWO dismantling that is almost now complete, no better fragmentation of society than this one!

Just one problem it is getting out of control and the NWO may lose power if things continue at the rate they are.

Off course the NWO would never allow this to happen, just enough destruction to fragment societty, put an end to national identity, have a bogey man to help bring in totalitarian laws, and then they will target the issue to try and contain it.

At the moment this all serves their purpose, the communists are aiding and abetting but it's not the communists that are pulling the strings, it's the globalists and the corporate and banking cartels that DELIBERATELY created the mess to begin with.

If we end up with an islamic run Europe then it will be because the NWO wish it and will control it, this is unlikely, a state of perpertual fragmentation is far more likely.

The NWO think that once the fragmentation is complete they will then be able to propagandise ALL the people to their will, using propagada, incentives and the brutal police state they are putting in place.

All the so called communists etc are an irrelevance, just usefull ididiots that will abandon real Marxist ideology at the drop of a hate and adapt to fascism just as the Labour party and it's followers have!

This is why we need to focus on the NWO, get to the disease, not the symptons.