The Colonist Invasion From France 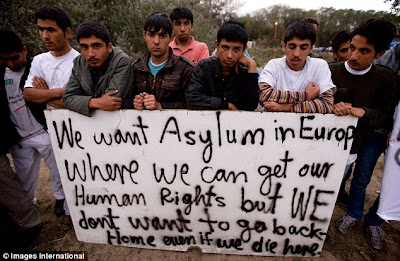 Image - These are colonists and economic migrants, not asylum seekers.


1) Why dont these people claim asylum either in bloody FRANCE where they are, or in the first SAFE nation they come too. They arent Germans or British, they are Afghans so they should be claiming asylum in any one of a dozen nations before they get to FRANCE - therefore they are ARE NOT asylum seekers, they are economic migrants and therefore the media should stop calling them asylum seekers.

They are either economic migrants or colonists, but either way they should be kicked out of Europe.

2) They should stay in their own countries and rebuild their own economies, not come here or to Europe - they are simply opportunist parasites. They should be at home fighting the Taliban alongside our British troops who over there trying to supposedly build a 'democracy' (hopefully one not like this politically correct fascist state). These colonists are cowards on the make, the whole lot of them.


3) Use the flamethrowers to burn the entire place down and send a signal to the world that economic migrant parasites and bogus asylum seekers are not wanted in Europe.


4) Arrest the liberal and leftist scum in France and Britain who facilitate these invaders and colonists and try them for treason. Then we should do the same with all the liberals and leftists in this country who are parasites on the public purse working to facilitate the immigration invasion, and try the politicians that surrendered our borders to the EU and immigrants for treason.


5) Withdraw from the international conventions on immigration and asylum, withdraw from the EU, withdraw our British troops from wars abroad and seal the British borders and then use them to deport the millions of illegal immigrants and colonists in the UK.

Posted by Defender of Liberty at 02:31

and British troops are dying for this vermin?