The BLACK Nazis - A Triumph of Diversity 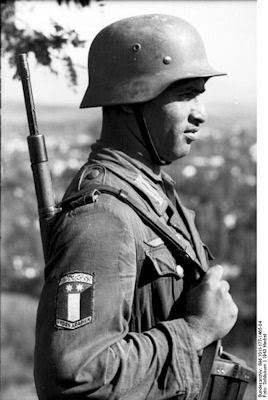 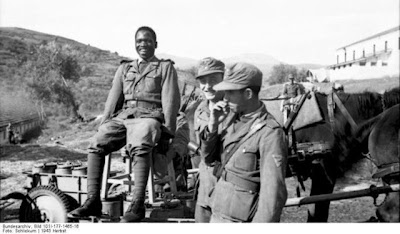 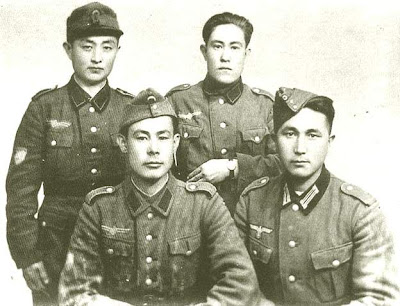 The falsification of history by incumbent political and media elites is the enemy of democracy, for without access to the truth of the past we have no basis on which to judge our society today, or to steer forward the society of the future.

For those amongst the British public still enslaved to media lies, here are some interesting links to facts on the Black Nazis who served and fought for Germany during World War 2.

Never heard of the Blacks who fought with the Nazis ?

Thats because this history has been hidden from you.

Note the comment from US president Harry Truman whose US army still treated Black soldiers under Jim Crow as second class citizens even whilst they were dying to 'defend' America ;

“I think one man is as good as another so long as he’s honest and decent and not a nigger or a Chinaman. Uncle Will...says that the Lord made a whiteman out of dust, a nigger from mud, then threw up what was left and it came down a Chinaman.”

These are the sick and vile words of the leader of the 'Free World', a man who sent Black American troops to die whilst insulting them.

Yet does history record these words from President Truman and does the History Channel show documentaries about the Black Nazis ?


Compare these words of President Truman to those of Hitler in his speech at the Platterhof. (26 May 1944) where he said to his officers and generals:

" We have this people of ours that are not to be defined as a race, and that is now clear to millions. However, gentlemen:when I began my apprenticeship twenty-five years ago, this was not so; there I was always told by middle-class bourgeois circles: Yes, people and race are one and the same! No - people and race are not the same. Race is a component of blood, a blood nucleus, but the people are very often composed not of one race but of two, three, four or five different racial nuclei. Even so, it is not possible or even desirable to dismantle such a united body of people, but in the course of political developments such a solution may occur anyway. "

Note therefore that whilst Hitler was saying a Nation is comprised of racial units and folkish units and each were a component of the Nation, Truman was de-humanising the Black troops who were dying for America at that time.

You dont read that speech of Hitler, as it has only been translated a few years ago and then hidden by the media.

Just as the History Channel doesnt make documentaries about the Zebra Killings and the Death Angels of The Nation Of Islam who slaughtered hundreds, and possibly thousands, of white men, women and children during the 1960's - the 'truth and the lie' are weapons in the arsenal of the present political elite.

Political Corrctness is the enemy of truth, liberty and democracy.

Political correctness must be smashed and the media legislated into telling the truth, not peddling lies and propaganda for profit and to get their whore political puppets elected.

The primary problem in our society is that 'truth' is a product of the media, and the media is run by corporations for their own profits and journalism written by journalists who cannibalise their own lies and propaganda.

Now of course you will be called a racist liar for writing this. Whatever the case, I've heard of this before as well so this revelation can't be dismissed as racism.

However, this secret could be due to the general contempt that nazis had for blacks rather than trying to portray whites as the only evil ones.

Of course I will be called a racist, its the default position of all idiots when faced with losing an argument.

The secret was hidden AFTER the war by leftist, communist and liberal whites and Jews in the media, in order to use blacks, who were still suffering under Jim Crow, as weapons against the WASP elite that ran America at the time.

Remember that the Nazis killed more WHITES than they ever did Jews and Blacks, in fact Blacks as a racial group in Africa were the winners of WW2 as European whites decimated their own numbers, lost their empires and then due to war guilt imposed the shackles of political correctness upon themselves and their own society - resulting in the present white self hate we see today.

The only real winners of WW2 were white liberals and communists, the Jews in westen societies and Israel, Blacks in Africa and Israel itself for without Hitler there would have been no Israel.

No doubt I will be called a racist again for telling this truth.

Such is the burden we truth sayers have to carry.

And there were Sikh and possibly Indian Hindu troops that fought for Germany (I think Bhose was the leader of the latter; I might have got it all wrong - let me know LJ). Muslims fought for the German in Yugoslavia too I believe. Everything is more complicated than is first presented. It was French troops that fought to the end in Berlin, defending that capital against the Russians...

Yes mate, you are correct.

There also Tibetan Buddhists and British soldiers in the SS regiment, The British Free Corp, who also fought the Russians outside the Hitler bunker.

The French, Tibetan Buddhists, Chinese and British soldiers were the last to surrender alongside the Waffen SS.

History is always more complicated than the liberal retards understand.

The real truth is out there. The winners always write the history and what we have had is 60 years of propaganda. Where does one start? Well why not at the begining where Hitler wanted Danzig back a city 98% German and went to war to get it.He gambled on a short war with Poland but found himself against the might of the French and British empires with their millions of square miles of Lebensraum and their millions of oppressed subjects in India and the far east.Of course the latter were fighting for " freedom".
Churchill attacked Chamberlain's policy of appeasement but was very happy to appease the Soviet Union.He also didnt oppose Polands incorporation into the Soviet empire at the end of WW2.
Until the outbreak of war in 1939 comparing the murdered victims of the totalitarian states you will find Hitler could claim less than a hundred and Mussolini less than a dozen. Stalins victims by 1939 numbered millions. Yet Stalin became Churchill's " Uncle Joe" !
It was the British who started the policy of terror bombing from the air. At Warsaw the Germans gave 48 hours warning and enabled civilians to be evacuated. If you can understand German may i suggest seekers after the truth get a diferent perspective by watching Die Deutsche Wochenschau on you tube. Yes its propaganda but you will get the other sides propaganda and see how things were not always black and white.

Is that Trevor Phillips in the top photo?

here are some videos about it

"Is that Trevor Phillips in the top photo?"

I'd like to know more about the Tibetan Buddhists and the Chinese involved...

Read the kinks they contain some info on them,

though that depends on the info being put online of course.

Plenty about the Jews, not much about the Tibetans.

Those pictures aren't of nazi soldiers, those are german soldiers, Wehrmacht ain't SS.They would've never been allowed to enter the SS troups, you had to be arial in order to enter the SS.You seem to defend the truth with lies.Nice intentions, though.

I'm black and there isn't much to be done about being racist. It's not about cross burnings. It's about idea's like crime and race or the quote you made from truman I have always told people the only diffence between hitler and the u.s. winning the world is black people speaking english or german. As much as the history channel fetishises hitler it never really does him justice because they are always trying to create some false contrast between their intentions. The final solution was borne out of north american eugenics. The blond hair blue eyed thing never made sense, since he he declared war on the blue eyed americans to defend the japanese plus the italians over the blond french and anglos. Hitlers ideas on race were a product of that time and when I hear whining about affirmative action or "race card" I can't hear any difference from calls for a "master race". I don't think people should whine about being called racist if you have a ethnocentric view that believes others are less than, you're a racist, just like grass is green or water is wet. It doesn't make someone worse than anyone else, most people harbor xenophobic and stereotypical believes about one group or another but people should own up to it rather than get mad when someone takes notice or offense to bigotry. I also blame the jews for the distorted picture of hitler :) Keep up the good work.