How to Kill British Culture 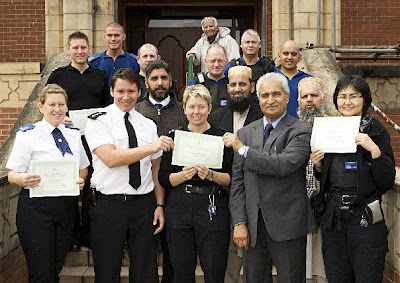 Image - Notice the male copper at the front with his goofy 'look at me I will now get a promotion as I have demonstrated my politically correct credentials' smile. Notice the warm fuzzy glow of politically correct moral superiority in the faces of these coppers, the same smile the NKVD had in Russia as they shot people in the head in the Gulags.

If this is the future of British policing, then this country is screwed.

The article below, and the image above, show how British culture will be killed.

Rather than making immigrants assimilate into British culture, the Police and government are allowing them to exist here as colonists.

They do not speak the English language, a pre-requisite for assimilation into any nation on the planet, instead the police are told to learn their language.

This is where the Police are active agents of our national destruction, riddled with the syphilis of political correctness, as the police no longer protect our NATIONAL community, they serve the interests of the global migrants and colonists of every nation that arrive in our country.

The police should not learn foreign languages - IMMIGRANTS SHOULD LEARN ENGLISH.

We are not here to serve them, they are here to assimilate into our nation and culture.

The demands of a minority that the majority accomodate them is the antithesis of democracy, and the pre-cursor of the destruction of our national culture.

The police, under the control of the corrupt ACPO cabal of new labour arselickers, is an institution destroyed.

The police need to be saved by sacking all the ACPO crooks and mafia and then imposing a new policing body with one simple agenda - FIGHT CRIME - not keep the police acting as ponced up socoal workers who wont arrest thugs as they dont want them to feel 'persecuted' or 'alienated' by society.

Officers from Rochdale South Neighbourhood Policing Team have been given awards after taking part in a series of basic Urdu classes.

The six-week language course that started on 1 August was held in community centres across the Milkstone and Deepish areas. They were designed to help improve officers knowledge of the culture and to strengthen links with the local Asian community.

Chief Inspector Troisi, said: “Learning the language of the community our Neighbourhood Policing Officers serve is a great way of understanding and better serving the people.

Totally agree with your sentiment, but the old bill are looking in so can you re-post in a bit more'PC' version.

I'm sure that most of the Police are decent people, in fact I have good evidence they are in that despite coming into contact with dozens over the years, i have never met one that was 'bad'
I'm equally sure though they know what is going on and where we are headed and they might be thinking of leaving the force in disgust.
Can I suggest to all the decent Coppers and Security service personnel that the best thing they can do for the country is remain in your current Job because if you leave, you will be replaced by less decent Police officers.

Which will increase our slide into totalitarian Hell.