ACPO and the PC PIGS 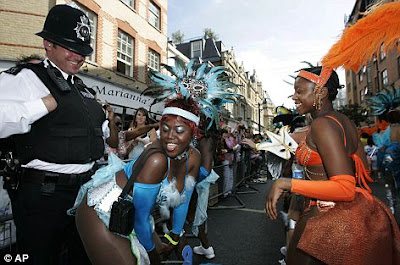 New Labour and ACPO have turned the police into the PC Pigs, the para-military wing of political correctness.

The Tories and Lib Dems are so gutless and afraid of being called 'racist' they will do nothing to change this situation.

The suspect stared at me with hooded eyes, devoid of any emotion or conscience. His emaciated figure was so wrecked by heroin abuse that he could barely raise his arms.

‘Hello, inspector, it’s me again,’ he said, his voice dripping with disdain.

He had every reason to sound cynical, even contemptuous. He was a one-man crimewave, a prolific offender whose miserable life was dominated by violence, drugs and thieving, yet in all his years of delinquency he had never been properly punished by our laughably misnamed justice system.

When he was brought into the station last week, on a charge of stealing from a 94-year-old woman, I had a look at his record. It was a lengthy indictment of the incredible leniency of our courts.

Aged only 23, he had been arrested 80 times and convicted of an incredible 140 offences.

Among his crimes were assault, aggravated burglary, blackmail, theft and possession of Class A and Class B drugs.

His behaviour has long been out of control, showing respect for neither the law nor the rights of others. But despite his lengthy catalogue of offending, he has spent just 12 weeks in prison.

The only lesson he has ever learned is that he has nothing to fear from the courts. No doubt he will receive another ineffectual slap on the wrist the next time he is up before a judge.

More...86mph and you won't be fined: New speed camera guidelines allow drivers to go even faster... with no points put on licence
Why wasn't the Salford Stallion reined in sooner? For over a year nothing was done to stop swaggering teacher preying on pupils
News of the World chief reporter and former news editor arrested over phone hacking scandal

As a long-serving police inspector, I despair of the reluctance of the state to deal vigorously with serious criminals such as this thuggish drug addict. This soft, destructive stance not only weakens public faith in the fight against crime, but also undermines the morale of the police.

What drags down our effectiveness, however, is not just the useless courts system that so often undoes all the effort we put into building cases, but also the highly politicised, target-driven, dogma-fixated culture of the police hierarchy.

Good humoured: But police officers spend more time in diversity training than they do learning to use batons and tasers
Instead of allowing us to focus on the real task of tackling criminality, police chiefs and politicians have bogged us down in bureaucracy, much of it driven by fashionable obsessions with multiculturalism and meaningless performance statistics.

Official determination to manipulate crime figures has reached new heights of idiocy. Data is no longer a reflection of performance, but an exercise in deceit of the public.

In this brave new world of propaganda — conjured up by a string of directives — a vast array of crimes are reclassified by ‘crime managers’ to lessen their seriousness.

Even vandalism to vehicles can be ascribed to ‘stones thrown up by speeding cars’.

The warped priorities of this culture are also reflected in the ridiculous amount of time we have to devote to the creed of diversity.

At times it seems as if the modern police force is seen by senior managers as a vehicle for social engineering rather than deterring crime.

My internal office phone directory lists no fewer than 32 officers with ‘diversity’ in their job title, all of them working nine-to-five in desk-bound jobs, while we slog it out on the front line. I was half-hoping that, given their irrelevance to the battle against crime, they might be made redundant in the public-sector cuts, but that was far too optimistic.

Diversity is sacrosanct, its commissars are protected and its influence is all dominant.

So in our training, for instance, just one day a year is devoted to practical instruction in officer safety, dealing with procedures such as correct use of handcuffs, Tasers and batons, or how to put a violent suspect in a van or cell.

Yet the effort devoted to diversity is far greater. We have to carry out two days of diversity training a year at headquarters, another day at our divisions, go through an eight-hour ‘e-learning’ package on our computers and, in our annual performance appraisal forms, show that we have accomplished three separate objectives ‘to raise diversity awareness’.

In addition, during weekly individual meetings with our supervisor, we have to explain what we have done to promote cultural diversity.

The minutiae of Hindu festivals, details of Black History month and the rituals of gypsy culture are all drummed into us. The whole pantomime is idiotic, especially in my neighbourhood where the ethnic minority is tiny.

Once, as one of my personal ‘diversity objectives’, I stated I had listened to some Indian sitar music in a Manchester park.

Such absurdities can be found everywhere in the police. So we were told recently that former servicemen like me were no longer allowed routinely to wear medal ribbons on our uniforms, as had previously been customary, because such insignia might be deemed offensive to Muslims and Irish people. However, we have been encouraged to wear Gay Pride badges.

Similarly, Welsh and Scottish police forces are allowed to wear their national badges on their uniforms, but the St George’s flag appears to have been banned by English forces, as if our national identity is an embarrassment.

Diwali: The minutiae of Hindu festivals, details of Black History month and the rituals of gypsy culture are all drummed into police
The neurosis about diversity is also reflected in the requirement to cater for every type of inmate, so our custody suites have a menu of no less than 16 choices, include low-carb, vegetarian, fat-free, kosher and halal.

The ideology extends to the front line. When visiting a Muslim household, we are instructed to remove our shoes, but I have refused to obey that edict because I believe it is disrespectful to my position as British police officer.

Political correctness has destroyed the moral self-confidence of senior managersOn one occasion, I had to call on a Muslim family and the daughter refused to let me in until I had taken off my boots.

I simply told her that, while on duty, I was not prepared to remove any part of my equipment, footwear included. So she went off to her father to report my non-compliance, only to find he did not object at all to me keeping my boots on.

When I reported this back to the Diversity Unit, the officer implied that I must have intimidated the father, which was nonsense.

This diversity officer was indulging in just the kind of stereotyping he condemns in others, clinging to the belief that every Muslim adheres devotedly to religious custom.

On another occasion, I was given a reprimand because I told a family that their son was a drug dealer. The mother had made a complaint that we were harassing him.

When I turned up at her home, which appeared to be well-equipped with the proceeds of his drug crimes, I told her frankly: ‘We keep arresting him because he’s a dealer.’

Such honesty prompted another complaint from her, and I was told I should have shown more ‘tolerance and politeness’ in my language towards the family.

Binge drinking: Two laws can be used to deal with inebriated youngsters - depending on how the crime stats are looking
It was just another indicator of how political correctness has destroyed the moral self-confidence of senior managers.

Almost as depressing is the dead-weight of bureaucracy. Form-filling has become an end in itself.

For example, we were recently asked to fill in a 14-page document called a Display Screen Risk Assessment, which was meant to detail the safety of our working environment, including computers and furniture.

The whole exercise was absurd, since all our office equipment is supplied centrally — and therefore, by definition, approved — by the very bureaucrats asking us to fill in these safety forms.

Bureaucracy also means that crime figures can’t be trusted. Successive governments have been fond of boasting about falling crime rates, but I’m afraid the statistics are less and less reliable.

To take one classic example, a group of youngsters binge-drinking in a town square could be dealt with under Section 5 of the Public Order Act, which would mean their behaviour would be recorded as a violent crime, leading to action through the courts.

Or it could just be handled as an incidence of drunk and disorderly conduct under more ancient laws, with the result that the crime would not be recordable and the offenders would be sent home or kept in the cells until they sobered up.

So, often, the police response will depend entirely on that month’s crime statistics. If the local chiefs think the crime rate has been too high in recent weeks, they will demand that no arrests be made under Section 5.

Instead, all miscreants should be treated under the less rigorous category of drunk and disorderly. This does nothing for police or public morale, particularly if crimes have taken place.

At one stage we were issued with a fleet of fast-pursuit vehicles — standard saloons fitted with all the mod cons of policing, such as radars, radios and computers.

But we found that, at speed, the cars were uncontrollable. The only way of making them safe was, believe it or not, to put a quarter of a ton of sand in the boot.

There were similar problems with new four-wheel-drive estate cars for firearms officers, which were discovered to be simply not big enough for four armed officers with all their equipment.

So, though we didn’t need such gas-guzzlers, they had to be passed on to the rank and file. More money down the drain.

At a time of financial cuts, none of this has raised our spirits. Nor has the aloof attitude of some of our senior personnel.

In one ludicrous instruction, they barred us from having a cup of tea with paramedics at the ambulance base beside the local hospital because they said the water boilers might be unsafe, though such camaraderie has long been an integral part of the emergency services.

Eco-friendly: The new four-wheel-drive cars for firearms officers were discovered to be simply not big enough
Even more offensive was their decision to bar the playing of radios at police premises, on the grounds they could not afford the £20,000 fee under new licensing regulations.

Yet these same high-minded, prudent chiefs can be seen swanning around in £60,000, top-of-the range BMWs bought at the public’s expense.

On coming to power last May, the Coalition was meant to have changed all this. As the parties of reform, the Tories and Lib Dems would lead the fight against crime. Yet the culture of bureaucracy and diversity remains intact.

Often the rhetoric of the Coalition is simply ignored. So Home Secretary Theresa May recently announced she had abolished a raft of performance targets.

These included the specific requirement that, as part of their annual performance appraisal, officers had to set out three objectives for raising public confidence.

This bureaucratic ‘public confidence’ order, she said, was consigned to the dustbin of history. Yet, in reality, it carries on, just under the new title of ‘public satisfaction’ objectives.

Dogmatic officialdom continues on its own sweet, expensive way — and we in the poor bloody infantry are continually hampered in the struggle to do our job, which is to actually fight crime.

The inspector is a senior police officer serving in the South-East. inspectorgadget.wordpress.com

Posted by Defender of Liberty at 23:32