The Power of Psychology 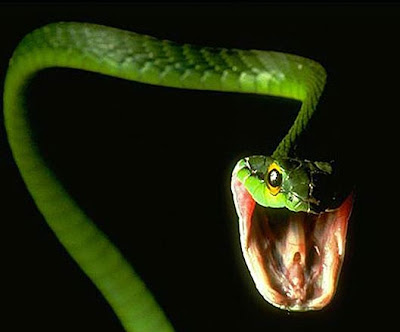 I read the article below and then found the video clip he was talking about in the article about the snake in the suitcase - link here ;

This article makes a great point.

One must always understand the psychology of ones opponents if one is to defeat them.

With the rise of a new more militant ANC in South Africa who have promised to ethnically cleanse whites from South Africa, then this level of psychological knowledge against such ANC criminals is an essential survival tool in a racist society where whites are racially targeted simply as they are white.

Some of you will remember the snake experiment I conducted for fun some years ago when I bought a toy rubber snake and put it in my car. I had heard that blacks associate snakes with witchcraft and they are petrified of snakes.

I had noticed that keeping that rubber snake in my car that it often elicited real interest from blacks who saw it. On several occasions that toy rubber snake became the topic of conversations as black men who saw it would ask me about it. And these blacks, fascinated by the rubber snake would sometimes invite other blacks to come and see my rubber snake or on one occasion one even wanted to use the snake to scare another with it.

Black people are exceptionally afraid of snakes, most especially live ones. I don't like live snakes myself, but I think with age I am getting pretty indifferent to things which used to creep me out when I was younger. These days, many people keep exotic lizards and live snakes as pets. Corn snakes for example are pretty common and they grow to a pretty reasonable size.

In terms of security, perhaps the real problem is that we should not be putting up "Beware of the dog" signs, since black criminals are poisoning dogs. Perhaps the real sign we should be putting on our gates is: "Beware of the Snakes" (plural!). I think that would be a good sign to put up. That would creep them out! I am game to put up a sign like that at my gate. I must find someone who can make such a sign for me.

One neighbour of mine upon spotting the snake in my car told me the story of her daughter who lives on a plot outside Johannesburg where they had been robbed so many times. They had their car stolen and their house was broken into several times. Then, in desperation her daughter did the following: She went and bought several toy snakes and put them into the windowsills of her house. The old lady said the robberies then stopped!! The thieves were still around because they stole one of their vehicles. My neighbour told her daughter that she should have put the snakes into the vehicle too because then it would never have been stolen!

My neighbour and her daughter were convinced of the power of the snakes.

I remember from my military days a guy who kept brown house snakes. They were small and escaped once and I was quite creeped out by these snakes expecting to find them in my cupboards! But, if you think we are afraid of snakes ... its nothing compared to the black fear of such things.

There is an incredible movie skit from an Afrikaans comedian, Leon Schuster. He put a python into a suitcase and left the suitcase by the roadside expecting someone to stop and steal it. Along comes a black minibus taxi, drives past, stops and then reverses. The blacks send out a little black kid who grabs the suitcase, and he lugs it back into the Toyota minibus taxi. Then the taxi drives off quickly as they do. But it hardly goes 10 metres and it slams on brakes and you see the blacks jumping out of the doors and windows. They all exit that vehicle in a handful of seconds... throwing themselves out of the windows.

Clearly they opened the suitcase, saw the python and everyone ran for their lives even though the python is largely harmless. It is a pretty nasty practical joke, but its effectiveness is incredible. Someone should find the original and put it on YouTube for foreigners to see. What transpires in that skit in less than 15 seconds is truly astounding and is done at a speed that is breathtaking.

The British used witchcraft during the Mau Mau insurgency. They killed trees with chemicals and then spread the rumour among the blacks that this was a sign that their ancestors (which blacks believe live in the trees) are unhappy with them.

I have walked into shops in Johannesburg where these "Traditional HealerS" (read: Witchdoctors) ply their trade. There are lots of them around.

The issue is not whether we believe in witchcraft, since we don't. But blacks believe in it and there are many documented cases in Africa of blacks who died from no physical illness, purely because they believed a spell was cast on them.

When I was a kid, I saw blacks and this witchcraft in Zimbabwe. Our "Cook boy" (the black guy who did our house work and cooked for us), brought me a jam bottle with leaves and water and other gunk in it, which he said he dug up on a path. He said a witchdoctor had put it there to put a spell on someone who walked over it. He launched into a long discussion telling me of the power of witchcraft and how he knew blacks who walked over the jam bottle and suddenly got an incredible pain in their legs.

I have had discussions with blacks who had university educations who would attest to the existence of witchcraft and its power. But blacks know that witchcraft only works on them and that whites are immune to its powers.

But there are blacks out there who are multimillionaires, who are businessmen and politicians who believe in witchcraft. I know from personal references that there are whites who know of Robert Mugabe's own belief and use of witchcraft going back decades. I wrote a story some years ago of a black businessman who was found in Zimbabwe with human body parts in the boot (trunk) of his BMW. The sale of human body parts, of the muti-killings (murder of young black children for their sexual organs) and many other things which go on to this day, are most likely PAID FOR BY WEALTHY BLACK BUSINESSMEN AND POLITICIANS WHO BELIEVE IN WITCHCRAFT AND ARE PAYING WITCHDOCTORS TO DO THIS BECAUSE OF THE "STRONG MAGIC" IT WILL BRING TO THEM.

For us whites, the game is to tap into their natural beliefs. I even made contact with a "Traditional Healer" and made a suggestion to him. He was a bit arrogant at first but he sent me an email recently. I have some ideas about supporting these Witchdoctors.

A white lady friend of mine told me a bizarre story one day. She was struggling to sell a house, and someone talked her into going to a witchdoctor. The paid the witchdoctor money and the next thing was a black person came and bought the house!!!

If you will read history, you'll see that Shaka, the King of the Zulus, who was the greatest black military genius of all time, and who was a very shrewed and clever black man saw through these witchdoctors and the power they held. He devised a series of cunning tests and moves to entrap the witchdoctors and to use their power against them. I recall reading this in a book more than 25 years ago. I can't remember the name of the book but it was a biography of Shaka. Shaka was the greatest black African leader of all time. I have a lot of respect for his military/leadership skills ... but Mugabe is the other guy I have respect for with his bizarre, but cunning tactics.

I think these so-called Traditional Healers, who, despite their claims to be involved in "medicine" are truly WITCHDOCTORS and practitioners of WITCHCRAFT and SPELLS... ply a very cunning trade based on human psychology and self-interest. They use their fear factor to influence blacks and to strengthen their own power base.

The WitchDoctors of the blacks are no different to say, wealthy white businessmen in New York. They have a certain powerbase and they use it. In the case of the witchdoctors, the hold is psychological. They play the same role in black society that Rabbis play in Jewish society or the role that Christian priests used to play in White society. The Witchdoctors have a lot of psychological power and they are out to make money and gain influence and they do it by exploiting their psychological hold over the blacks.

Even the Zimbabwean and South African Govts have tapped into this power. They have both gone at various times and given the "Traditional Healers" a lot of good press because they were trying to rope them in to working on the minds of blacks.

But these Govts know of the psychological hold this witchcraft has, and they have tried to tap into it by roping in the witchdoctors to assist with AIDS programs and other things.

I have said for years that I think whites should make a thorough study of witchcraft and its power among the blacks. It is something whites should study and then keep the results firmly to themselves. There is power in this stuff... if it is used intelligently.

Studying blacks and their strengths and weaknesses is something that needs to be done thoroughly, and to overlook or to ignore witchcraft is to make a very serious error. Witchcraft has a power over the black mind that is much stronger than that which Priests or Rabbis have.

Go out into Africa and see if you can find even one black person who does not believe in witchcraft ... I dare you to find such a person. There are many blacks out there who are in positions of unbelievable power who believe this stuff in the same way that a phyisicist believes in the laws of gravity.

The key is to find out what the "logic" is, that lies behind this stuff. Once you understand the logic and the terminology and how it is applied, then you can start using it.

There are one or two white people in South Africa who have actually gone and "studied" to become "sangomas" (witchdoctors), and who throw the bones and do all that sort of stuff. One should take the time to understand this stuff.

If you were to take this stuff, and then combine it with a knowledge of physics, Western magical techniques and probability... you could come up with some really utterly wild stuff.