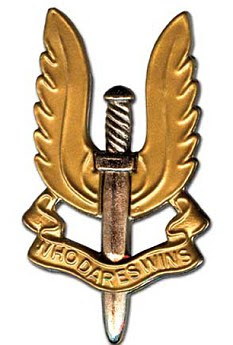 These guys were no doubut going to confirm that we are in Libya to steal the oil, that the 'rebels' are Al Qaeda and that a ground invasion is planned.

You know the traitors run the country when they are arresting our army heroes.


Special Forces scandal as officers are held 'for trying to leak secrets'
By Stephen Wright, David Williams and Ian Drury

The unprecedented arrests came as members of the SAS and SBS were deployed in Libya in preparation for airstrikes and to liaise with rebels and identify stranded British oil workers for rescue.

It was unclear last night what the officers are suspected of leaking, but it is understood it involves attempts to pass it to a major broadcaster.

The investigation is focused primarily on information relating to the war in Afghanistan against the Taliban and Al Qaeda. But it is also looking at secret information the men had access to about Libya and other countries where Special Forces have been operating.

Such is the sensitivity of the case that the Cabinet Office, the Ministry of Defence and the Home Office are being regularly briefed on its progress by anti-terrorist officers. Whitehall officials last night described the allegations against the men, who would have had a high security clearance, as ‘extremely serious’.

Neither officer has been named. One was based in the heart of the MoD headquarters in central London where the Libyan operation was being planned.

As the crisis in Libya developed, Britain moved in SAS men. They were joined later by members of the SBS and soldiers from the Special Services Support Group, including communications specialists.


The arrests on March 2 took place two days before an MI6 officer and several members of the SAS were held by rebel forces near the centre of anti-Gaddafi operations in the eastern port city of Benghazi.

The humiliating detention, after they had been flown in by a Chinook helicopter under the cover of darkness in an operation sanctioned by Foreign Secretary William Hague, was a huge embarrassment for Britain and the SAS. The arrested officers were held for 24 hours as detectives and specialists from Scotland Yard’s SO15 Counter Terrorism Command carried out searches.

They were fingerprinted and forced to pose for a police mugshot and provide a DNA sample before being released on bail. It is believed that police have searched offices and addresses linked to the two suspects.

Because of the sensitivity of the probe, the searches were carried out very discreetly.

Phone logs, text message records and emails are being examined. A report is being prepared for the Crown Prosecution Service, which will decide whether the men will face criminal charges.

Badge of honour: But the SAS are firmly in the spotlight after 'leaking' revelations
A Scotland Yard spokesman said: ‘On the evening of Wednesday March 2, officers arrested two men aged 33 and 35 on suspicion of breaching the Official Secrets Act 1989.

‘Both men were taken to a central London police station.

The force added: ‘The investigation is being conducted by Counter Terrorism Command. It is not terror related.

We are not prepared to discuss any details of who the suspects are.’

Members of the Special Forces are operating deep inside Libya, calling-in air strikes and gathering intelligence on Nato targets and senior figures within the Gaddafi administration.

They are also continuing to play a key role in covert operations in Afghanistan, most notably against Taliban field commanders.

In recent years, there has been growing concern in the military and Government over the amount of information about Special Forces operations being leaked to the media.

Some former SAS men have made a fortune out of stories about operations. Andy McNab’s first book Bravo Two Zero, the story of an eight-man patrol compromised behind enemy lines in Iraq during the first Gulf war in 1991, made him a millionaire and broke for others the previously guarded code of secrecy surrounding the elite Regiment.

A spokesman for the MoD last night confirmed that two members of the Armed Forces had been arrested.

Posted by Defender of Liberty at 23:42

I am still waiting for the traitors I mean MPs, MEPs and Councillors, to reply to my writetothem , regarding these facts of the ''humanitarian'war for oil ; NOT IN MY NAME