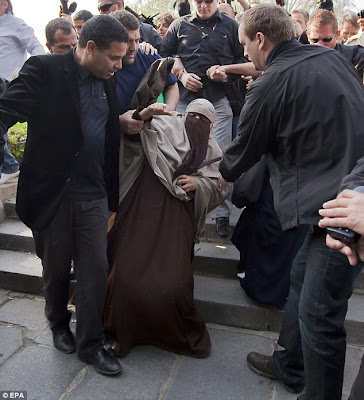 Image - female Islamist being arrested in Paris today. Now deport her - but not to the UK okay chaps.

The demonstrations, however, were on a relatively small scale with the handful of protesters being outnumbered by police, reporters and tourists.

Ironically, the biggest protest was actually in London where a group of women in full black burkas gathered outside the French Embassy.

But it was the women wearing niqabs who drew most of the attention next to the famous Notre Dame Cathedral.

‘We view this ban as an assault on our human rights, and those staging counter demonstrations are solely here to cause trouble,’ shouted Aisha, a 28-year-old mother-of-two.

Although she kept her veil free to avoid arrest, Aisha made it clear that she was contemptuous of the kind of people who want to stop her wearing the niqab or the burka.

‘The feminists say it oppresses women, while the nationalists just don’t like to see Muslims in France,’ she said. ‘It’s a strange alliance, but one which the French government clearly wants to win over in time for next year’s presidential election.’

As she spoke two niqab wearers standing nearby outside Notre Dame were detained, prompting cheers from the counter-demonstrators.

‘This is just day one of the ban,’ said one of around 100 officers policing the demonstration. ‘We’re going to be involved in these kind of disturbances non-stop.’
The burka ban has been dogged by controversy until becoming law in France today.

Women who break the new legislation could face fines of 150 euros, or £132, as well as citizenship lessons.

But officers involved in today's arrests in Paris said they were likely to be released shortly after being questioned about an illegal gathering.

'They should not be here demonstrating against anything, least of all the face veil ban', said one officer, who was wearing full riot gear as he stood outside Notre Dame.

'Women officers will be dealing with the offenders, and the matter will be dealt with as sensitively as possible.'

Alexis Marsan, a public order official who also attended the scene, confirmed that the rally in front of the cathedral was unauthorised, and that others taking part had also been arrested

banning the burka is counter productive and will be a negatve in the long run, it is simply the state continuing with its destruction of ALL culture.

i have always thought that bamnning the burka is counter productive as it means the spread of militant islam is hidden and not in our faces in the street, but the people want it and thats good enough for me.

Its good to see the feminists and nationalists join forces

I understand that the Muslims have very strong cultural background and they don’t like anyone to interfere in it. However, the French are famous for their national pride, too. I think there should be a bit of acceptance on both sides.

Anonymous said...
Its good to see the feminists and nationalists join forces

i dont think the nationalists should touch the derranged programmed feminazi slaves with a barge pole.

still the bankers got double the labour for the same money while divorce and it damage on society handed the children that were actually born to be handed to the state for indoctrination, the state became the father and they have no mother.