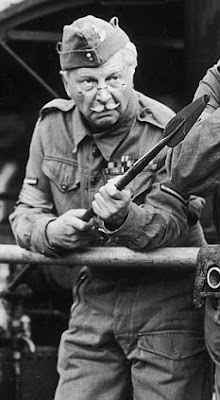 Image - Corporal Taffy Jones of Welshpool. " They dont like it up 'em the fuzzy wuzzies " showing off his new shiny spear just before he is sent off to Libya.

Gawd save the Queen !


Hooray the invasion of Libya by the British Army is about to begin.

Due to cutbacks in the British Army due to David Cameron giving Pakistan 650 million quid ( and an apology for the Empire ) the new unit will be equipped with the finest equipment left in the Imperial War Museum.

As we speak the pith helmets, puttees and sharp pointy sticks ( the fuzzy wuzzies dont like it up 'em apparently ) are being taken out of the display cases and prepared for battle.

London Zoo as part of the war effort is sending three camels to the front, though the RSPCA has said they must not be used in areas with land mines for health and safety and animal cruelty reasons.

Veterans of the last war in Libya are being asked to volunteer, and one old soldier, Taffy Jones from Welshpool has been the first to volunteer to fight.

" I fought in the last war ", says Taffy, " I can still find me way around a desert , though I have problems finding me way back from the shops. The Libyan desert is a bloody terrible place, the camel spiders are so bloody big I once saw a local Arab riding one ! Anyway I am not afraid, David Brent, sorry David Cameron, has put an extra fiver on me pension and that will ensure I dont freeze to death like I nearly did last winter as I coudnt afford to pay the gas bill.

Anyway we have been told we will all be home for Christmas - Hurrah !

I have packed me kit bag with tins of corned beef, dried eggs and have a load of silk stockings to barter for a bit of hows your father with the local ladies in Benghazi. "

It looks its gonna be a great war.

Sign up now or you will miss it, though of course you can always play BOMB LIBYA on the PS3 and be as much of a soldier and expert on the war as Obama and Cameron