The Cross Borne By Christians 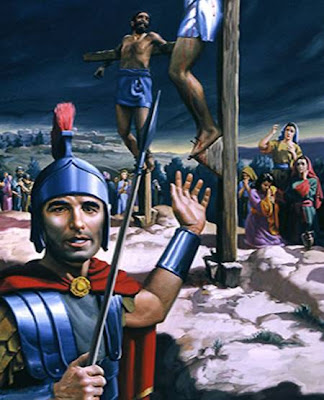 Image - America is the New Rome, whose Roman Legions of American troops help Islamists crucify Christians all around the world.

The Roman soldier is saying ' Welcome to America. We do Gods work by killing Christians'.


The Christians of the Middle East bear the burdens of the new Oil Imperialism, for as the West destabilises those nations like Egypt, Iraq and Syria and remove secular leaders / monarchys from power, then into the power vaccuum rushes the Islamists who then slaughter the Christians.

The greed of global mammon is killing the followers of Christ.

Those Christians that serve and support global capitalism are the agents of evil.

America is the new Rome run by the Christian Fundamentalist followers of the Anti-Christ whose support for wars like Iraq assist Islamists to crucify Christians around the world.

Christian Fundamentalists in America are the agents of evil.

When Dictators Fall, Who Rises?

One month before the invasion of Iraq, Riah Abu el-Assal, a Palestinian and the Anglican bishop of Jerusalem at the time, warned Tony Blair, “You will be responsible for emptying Iraq, the homeland of Abraham, of Christians.”

The bishop proved a prophet. “After almost 2,000 years,” writes the Financial Times, “Iraqi Christians now openly contemplate extinction. Some of their prelates even counsel flight.”

The secular despot Saddam Hussein protected the Christians. But the U.S. liberation brought on their greatest calamity since the time of Christ. Scores of thousands of those Iraqi Christians fleeing terrorism and persecution after 2003 made their way to Syria, where they received sanctuary from President Bashar Assad.

Now, as the FT and Washington Post report, the Christians of Syria, whose forebears have lived there since the time of Christ, are facing a pogrom should the Damascus regime fall.

Christians are 10 percent of Syria’s population, successful and closely allied to the minority Alawite regime of the Assad family. Said one Beirut observer, “Their fear is that if the regime falls to the Sunni majority, they will be put up against the same wall as the Alawites.”

For decades, notes the Post, the Assad regime “has protected Christian interests by enforcing its strictly secular program and by curbing the influence of the Muslim Brotherhood.”

Bashar’s father, Hafez al-Assad, slaughtered perhaps 20,000 followers of the brotherhood after they began a campaign of bombings and terror and attempted an uprising in Hama in 1982. Hafez al-Assad rolled up his artillery and leveled the city.

Observing the toll of dead protesters—more than 100 this past weekend, more than 200 overall, the work of police, snipers and agents of the regime—it is hard to summon up any sympathy for Bashar Assad. And if his regime were to fall, that would eliminate a patron of Hamas and Hezbollah and a close ally of Iran in the Arab world.

But before he embraces the Syrian revolution, President Barack Obama ought to consider, as President George W. Bush did not, what happens to Arab Christians when a long-repressed Muslim majority comes to power.

In Iraq, liberated Shiites used their newfound freedom to cleanse Baghdad of Sunnis while al-Qaida arrived and went straight after the Christians. In Syria, it would be a Sunni majority rising if Bashar and the Alawites were to fall.

What would that mean for Syria’s Christians, for peace, for us?

Since 1973, even when clashes have occurred and wars have been fought in Lebanon between Israelis and Syria or its proxies, the Assad government has maintained the truce on the Golan Heights.

Would a Sunni-dominated Syria do the same?

With the fall of the Mubarak regime in Egypt have come Islamist attacks on Coptic Christians. How will the Copts fare if the Muslim Brotherhood wins the September election and writes Shariah into Egyptian law?

In “The Price of Revolution” a half-century ago, D.W. Brogan inventoried the costs of the revolutions that so often intoxicate secular Western man.

The French Revolution led to regicide, the September Massacres, the Terror, the slaughter of hundreds of thousands of Catholics in the Vendee region of France, and almost two decades of Napoleonic wars.

The abdication of Czar Nicholas II led to the dictatorship of Lenin, Trotsky and Stalin, who would effect the murder of 1,000 times more victims than did the Spanish Inquisition in 300 years. And among the Bolshevik murder victims were the czar, his wife and his five children.

Fifteen years after the hated Kaiser, ruler of the Second Reich, abdicated, a proud veteran of his army, Adolf Hitler, established a Third Reich.

No altar-and-throne regime ever compiled a record of horror to match those of the French and Russian revolutions—or those of Mao Zedong, Ho Chi Minh, Fidel Castro and Pol Pot.

When the Shah of Iran fell, within a year we had the Ayatollah Khomeini.

Americans have welcomed the “Arab Spring.” Yet we should be forewarned that among those liberated when dictators fall is the sort of men that Edmund Burke described:

“Men are qualified for civil liberty in exact proportion to their disposition to put moral chains upon their own appetites. … Society cannot exist unless a controlling power upon will and appetite be placed somewhere, and the less of it there is within, the more there must be without. It is ordained in the eternal constitution of things, that men of intemperate minds cannot be free. Their passions forge their fetters.”

Americans, who incarcerate 2.3 million of their own citizens, 90 percent of them males, are surely aware of the truth Burke spoke.

And across the Middle East, there are millions of “intemperate minds” that would use the freedom and power democracy provides to majorities to suppress or eradicate their long-hated rival minorities.

If one-man, one-vote democracy across the Maghreb and Middle East is almost certain to strengthen the Muslim Brotherhood and to liberate Islamists to persecute Christians, why are we for it?

When did this idol of modernity called democracy, in which none of our fathers believed, become a golden calf we all must fall down and worship?

Posted by Defender of Liberty at 00:47

I noticed the underlying theme Muslim brotherhood etc and evreywhere Muslims are ''given ''these lands to be part of theri longed for caliphate..

obama the Muslim is making sure

The U.S. and other countries have to do something to stop this destruction and killing in Syria otherwise the Syrian forces will so many people who fight against them so the Syrian government leaders should be punished.

Sorry Prasad, but the US is not the worlds policeman ( even if it might think it is ) and what happens in syria is down to the syrians to sort out.

Why should America invade and kill syrians in the name of syrian freedom ?

Ah the Western created Muslim Brotherhood, formed by MI6. We can follow the pattern of these Western instigated Middle Eastern revolutions right back to the days of Lawrence of Arabia, the Grandfather of modern Islamic Jihadist imperialism.

I dont know about you lot, but im a proper Hebrew Christian of the old Testament, blood sweat and honour.

The liberal Christianity we have adopted today, is a fkn weakness beyond reason and the Zionists know it well..

I believe we should adopt the Old Testament and punish the scum who have thrust their fascist idiologies upon us.