Immigration and the Trojan Horse 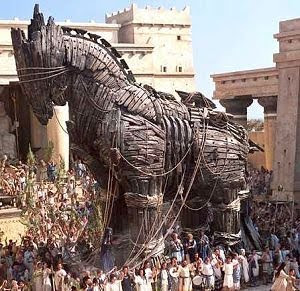 Many of your know the legendary Achilles the great Greek warrior that died because he suffered an arrow shot into his heel. The metaphor lives to this day. His men attacked Troy, but could not defeat them until they created a Trojan Horse that so interested the Trojans, that they pulled it into the walled city. That night, the Greeks jumped out of the belly of the massive horse and opened the gates to Troy's destruction.


As history repeats itself, the United States of America opens its gates to sworn enemies by immigrating them by the millions into the bowels of America. No one seems to understand the connection. But they will at some point in the future.


"The newspaper I am reading headlines yet another domestic terrorist plot," said McAlpin. "This time the plan was to attack several well-known Washington, D.C. subway stations. The news strikes close to home. Until very recently I lived in the Washington suburbs and often transited the subway stations the would-be terrorist targeted.


"Police arrested "a northern Virginia man" in connection with the plot who was charged with conspiring with people he thought were al-Qaeda operatives, but who turned out to be undercover FBI agents. The story eventually reveals the fact that the "Virginia man" is a Muslim immigrant from Pakistan named Farooque Ahmed who also happens to be a naturalized American citizen. His full hijab-clad wife is fromBirmingham, England, and is the founder of a group called "Hip Muslim Moms." It is telling that I am hardly surprised by the revelation that the would-be terrorist is an American citizen.


"The media will not report it but a sea change has occurred with respect to Muslim terrorists in the last ten years. Before 9/11 almost all Muslim terrorists and terrorist suspects, like the World Trade Center plane hijackers, were residents of Muslim countries. Their usual mode of operation was to exploit our sieve-like borders and feckless immigration law enforcement to travel over here and kill us. Today however, most of the Muslim terrorist suspects arrested or terrorist plots unmasked either here or in Europe involve Muslims who are permanent immigrants or citizens of the countries they intend to attack.


"During the first ten months of 2010 alone no less than sixty U.S. citizens were convicted or charged in cases involving terrorism.2 One year ago U.S. citizen and Army Major Nidal Hassan massacred 13 of his fellow soldiers and military comrades at Ft. Hood Texas. The same month police issued arrest warrants for eight Somali men with American passports and charged them with attending al-Shabab terrorist training camps in Somalia. And a few weeks ago a "Connecticut man" named Faisal Shahzad was sentenced to prison for leaving a lethal bomb in Times Square that fortunately failed to detonate. The common thread among these and almost all the other homegrown terrorists is their allegiance to Islam, which takes precedence over all other affiliations.


"Yet police seem baffled in trying to discern their motives. An Associated Press follow-up story the day after the D.C. subway bomber story broke says, "FBI agents who ensnared a suburban father in a terrorism sting involving a fictional subway bomb plot have turned their attention to figuring out what made the Pakistani-born U.S. citizen turn against his adopted country, officials say."3 I can save the FBI some trouble."


MEMO TO THE FBI: READ THE KORAN. THE SUBWAY BOMBER'S MOTIVE IS HIS "RELIGION" THAT SANCTIONS WAR AGAINST NON-MUSLIMS.


"For years the Wall Street Journal and other big business journals assured us that the millions of Muslim immigrants and refugees pouring into the U.S. would be no different from previous waves of immigrants," said McAlpin. "Notwithstanding their prayer rugs and strange-looking dress, once resettled in the U.S. they soon would be transformed into Big Mac-munching Little Leaguers and Girl Scouts, and for all practical purposes be indistinguishable from the rest of American mass consumer society.


"That narrative turned out to be a fantasy propagated by those so divorced from religious conviction or blinded by materialism they cannot believe that Muslims or any other religious believers would risk death or prison to act on their beliefs.


"The reality is that it is rare to open a newspaper or visit an online news site these days without reading about the arrest of a suspect or the discovery of a plot involving Muslims determined to kill Western civilians in the name of Allah. The devilish menace of home-grown Muslim terrorists is not confined to the U.S. but is a growing threat in Europe. Besides the potential frightful loss of life and the fear these plots spread, U.S. and Western European governments are being forced to spend hundreds of billions of taxpayer dollars to detect, prevent, and guard against them. And we all pay an enormous cost as a civilized society as we wade through security checkpoints, see once-peaceful public places put under police surveillance, and watch our formerly citizen-friendly courts and government offices transformed into virtual fortresses. This cannot continue.


"A creed such as Islam that commands its followers to impose it on the world by force and implement its laws governing every aspect of daily life as the Koran does is not a religion at all. It is a hostile, intolerant, and totalitarian ideology masquerading as a religion (see Stella Paul's article on page 3). The very word "Islam" means submission. And the Koran is clear that this submission is to be achieved by force if necessary. While there is no question that there are millions of Muslims who eschew the use of force, the idea that "peace-loving Muslims" can be distinguished from radical jihadist Muslims is a pipe dream. As Turkish Prime Minister Tayyip Erdogan has said, it is insulting to think there is such a thing as "moderate Islam," there is only Islam.4


"Our domestic elites cannot see past their self-deception that Islamic doctrine has been perverted and misused by a relative handful of radical imams to incite hatred against the U.S. The problem is Islam itself. Muslims as a group are a far more dangerous threat to Western societies than the old Bolshevik and anarchist fanatics of the late nineteenth and early twentieth centuries ever dreamed of being. Islam needs to be quarantined in the failed states it has already infected, and not allowed to spread.


"In the 1940s and 1950s, when U.S. leaders still knew how to defend Western culture and democratic institutions from totalitarian ideologies, the U.S. banned Nazis and Communists from immigrating to the U.S. The U.S. must treat Islam the same and impose a total ban on Muslim immigration. If immigration quotas must be filled, there are millions of Christians and members of other oppressed faiths living in Muslim countries who would be happy to replace Muslims. Stories of Muslim persecution of Christians and other religious minorities abound.


"In Egypt there are frequent reports of Muslims rioting, beating and murdering Coptic Christians and torching their homes because ordinary Muslims are enraged over things like the repair of Coptic churches or inter-religious dating. 5 From Indonesia to Pakistan, Iraq, and North Africa there are horrific attacks by Muslim militants on Christian churches and their terrified congregations. Do we have to wait until such scenes are commonplace here, by which time it will almost certainly be too late?

"Nobody has the right to immigrate to the U.S. Instead, immigration policy must serve the interests of the American people, foremost among which is the right to peace and security in their own home. If government fails at that, it fails its most fundamental reason for being.


"After a decade of growing domestic terrorist threats it is obvious to anyone not blinded by political correctness that Muslims as a group pose an intolerable risk to the peace and security of the American people. It is time for the U.S. to emulate Israel and ban Muslim immigration on national security grounds.


"There also are those who argue the U.S. should follow Norway's example and ban the construction of Mosques financed by money from abroad, particularly from countries like Saudi Arabia that refuse to allow churches or other houses of worship to be built on their own soil. But while the U.S. would be justified in imposing such a moratorium on the building of Mosques, such a ban would accomplish little in the long run unless it was accompanied by a ban on Muslim immigration.


"Three millennia ago, according to Homeric legend, there was an epic siege of the city of Troy by Greek warriors. But even after ten years of sustained and furious attack, Troy remained safe thanks to the courage of her defenders and her impregnable walls. Ultimately, however, Troy was captured and destroyed when the Greeks used guile to get inside those walls by hiding soldiers in the famous "Trojan Horse."


"The Homeric story is an accurate metaphor for the situation the U.S. faces today. Troy is even cited by Islamic leaders themselves who gloat about immigration as their ultimate weapon of conquest. We are fools if we fail to take them at their word and heed the lesson of Troy. For the sake of our national security and the preservation of our freedom, we must ban all Muslim immigration now."

Frosty Wooldridge has bicycled across six continents - from the Arctic to the South Pole - as well as six times across the USA, coast to coast and border to border. In 2005, he bicycled from the Arctic Circle, Norway to Athens, Greece. He presents "The Coming Population Crisis in America: and what you can do about it" to civic clubs, church groups, high schools and colleges. He works to bring about sensible world population balance at www.frostywooldridge.com He is the author of: America on the Brink: The Next Added 100 Million Americans. Copies available: 1 888 280 7715

Posted by Defender of Liberty at 00:05