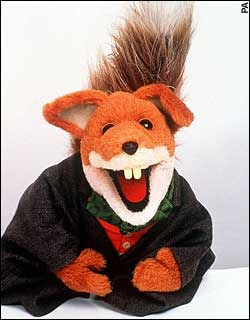 Image - Basil Brush. Even though threatened with the sack by the BBC Basil has bravely come out of the bushes and said he supports the BNP. 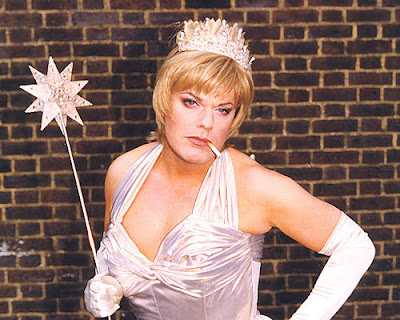 
Now that the Corporate Media are using New Labour sock puppets like Eddie Izzard, The Neville Brothers, Garth Crooks, Oona King and Billy Bragg to attack the BNP in The Guardian, other puppets have decided to reveal that they support the BNP.

Basil Brush reveals that he has turned to the BNP after his recent brush with the law over comments about gypsies on his popular TV show.

Basil said to me on the phone this morning, " I couldnt believe it", he says his voice rising and tinged with anger, " One minute me, Kermit the Frog and the Thunderbirds lads were sitting around the Thunderbirds swimming pool when my mobile rang and it was Andrea Callendar, the head of the BBC diversity unit on it. She was screaming at me like a total nutter, racist this, racist that, gypos this, gypos that. Christ almighty, I thought she sounded pissed at first or having a laugh, but she was bloody serious !", Basil paused for breath for a moment his woolen face wet with tears, sodden with anguish like a rugby players jock strap is wet with sweat at full time.

" I decided there and then, that no threat to stick me back in the cupboard at the back of Broadcasting House would silence me again. I despise political correctness. As a puppet I regard all those other puppets like sooty and sweep, who used to be anarchists by the way, as traitors to our nations. Muffin the mule is a drug addict and labour party supporter. There are no puppets in the BBC with any integrity. Andrew Marr even stole his ears from Rowland Rat !".

" Eddie Izzard is just another puppet of the Labour Party as well. When I saw the fat poof dressed in his pink, glittery fairy outfit waving a magic wand I thought to myself, ' Fuck me, that would have to be some fucking gi-enormous Christmas tree to support the weight of that fat idiot'. These puppets that support the Labour government sicken me. Wasnt it enough that they got their puppets in MI5, MI6 and the Corporate Media including the BBC to issue bogus propaganda to get us into the illegal Iraq War under false pretences ! Now they think we will be fooled by using sock puppets like Pete Doherty and Bono to support them, but the people are not that stupid".

Basils agent walks in and pours him a glass of orange juice as his voice is breaking, " Therefore in direct protest at the insidious creeping politicisation of puppets by the Labour Party I have decided to support the BNP. The BNP will expose all those sock puppets of the Labour Party that infest the media, the BBC and the rest of this corrupt country brought low by greed and profiteering. We need as a nation a new start, and only the BNP offer our people hope and a vision of a better Britain".