No more Excuses - Just Fuck off out this country 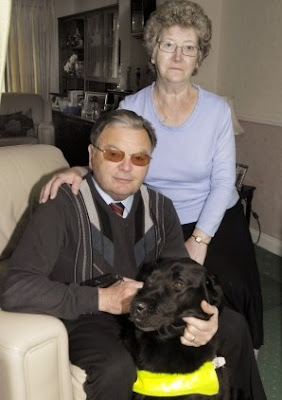 There comes a point when the truth has to be spoken.

Anyone of whatever religion, race or creed that abuses someone who is blind because they consider their dog unclean needs to fuck off out of our country or be sent to prison for a few years until they realise that this country is a civilised nation and not one in the grip of their pathetic and primitive superstitions.

That sort of crap is not acceptable.

To bully, victimise, harass and abuse the blind is the way of the coward and the criminal.

Nor is is acceptable when those such as this idiot bus driver who have become so sensitised over Political Correctness, or because they share the views of those that regards dogs as unclean and therefore they show no respect for the blind, assist in the abuse and victimisation of the blind.

As for the issue of 'unclean dogs' - a guide dog is something that contributes to our society, who assists people of all races, religions and creeds to live a full and normal life and who as animals live their lives in devoted service to the most vulnerable in our society.

Thats a lot fucking more than can be said for those idiots in this country who abuse the blind because they regard their dogs as 'unclean'.

A driver told a blind cancer sufferer to get off his bus when a woman and her children became hysterical at the sight of his guide dog.

George Herridge, 71, told how the mum flew into a rage and shouted at him in a foreign language. A passenger explained she wanted him to get off the bus during the incident on May 20.

Mr Herridge, from Tern Close, Tilehurst, said: “Her child was kicking and screaming and someone off the bus told me her child was frightened of my dog. The driver said, ‘Look mate, can’t you get off?’

The retired NHS worker claimed he was forced off a bus by a driver after a similar encounter last summer.

And a day after the latest bus incident an lady began screaming “I don’t like dirty dogs” at Mr Herridge at the Royal Berkshire Hospital.

A week earlier he faced further animosity from a couple at Asda in The Meadway, he said.

He is unsure what has provoked outbursts but said he thinks some have come from Asian people and that it may be due to religious or cultural differences.

If the people who were upset were Muslim, they consider dogs to be ritually unclean.

Some may have them as pets but keep them in a separate living area. Anything coming into contact with its saliva, such as clothes, must be washed seven times if they intend to pray in those clothes.

Mr Herridge said: “I do not expect any special treatment but just to be left in peace and live my life the best I can.”

Reading Buses accepted the driver was wrong but had been placed in an “impossible situation”.

Drivers have been re-instructed to convey the blind and the bus company has sought advice from the Royal National Institute for the Blind and hopes to speak with Muslim leaders.

As part of a Muslim Council of Britain project, Mufti Zubair Butt, Shar’ia advisor to Muslim Spiritual Care Provision in the NHS, admitted Muslims “require some education” on guide dogs.

In response to concerns raised about guide dogs in mid-2008, he said: “It is important that one does not impose one’s own understanding upon others, but one shows understanding and compassion for others, their needs and their views, especially in an open communal space and in a country where Muslims are living as a minority.”

Do muslims really need to be educated on good manners ?

Me and my organisor were travelling to Dagenham earlier this year to celebrate st George's day with the usual Parade, we had to travel all through East London to get there, she decided to bring her dog, i kid you not you'd think she'd brought a dangerous animal or something, there was mothers grabbing their children, of coourse this was to instill terror, i think this type of attitude is very irresponsible of muslim parents, particularly in a dog loving nation.

Even when we were trying to pass whole groups of muslims when we approached them it was like Moses and the parting of the Red Sea, it was a very weird experience to say the least....politicalMIZZ

Lee, might I argue that this sort of thing happens because our nation is TOO civilised?

Civilised society seems to be a phrase interchangeable with the words 'push over' or 'pacifist' or 'weak' or 'on the road to extinction'.

A touch of barbarity is needed. Just a touch.

Brilliant stuff Lee, this is the BNP we want to see! More please.

If they don't like it they should sod off!

Marvellous article Lee, the juxtaposition of headline, photo and blank space immediately below really works brilliantly, on my screen at least. Keep up the good work!

Aw, what sort of sweet little goggie has your friend got that made the Muzzies so scared, PMizz?

The muslim mom wouldn't like the US. Some hangouts kick out parents with screaming kids.

Phil said... "Lee, might I argue that this sort of thing happens because our nation is TOO civilised?"

I don't see that our nation is too civilised, otherwise why did the bus driver eject a blind man from the bus? It isn't to do with civilised, it is to do with politically correct brainwashing and the eradication of identity and the resultant sense of displacement that this creates. The bus driver didn't act in that way because he was too civilised, he acted in that way because he was brainwashed.

Hi anon, my organisors dog is a Springer Spaniel, hardly known to be a dangerous dog !....politicalMIZZ