Muffin The Mule Attacks The BNP 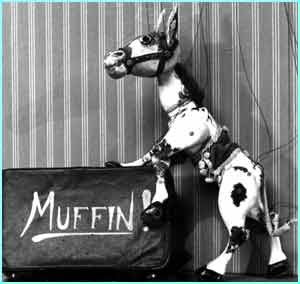 Image - Muffin The Mule - another New Labour supporting puppet attacks the BNP. Shortly after this picture was teken Muffin was rushed to hospital after overdosing on crack cocaine. Since his career hit the skids he joined the Labour Party and has been Gordon Browns main advisor on weapons of mass destruction in Iraq and a specialist in the Iraq Department of MI6.

An interesting letter in The Guardian from New Labour party members and puppets, a rump of z-list celebreties, knackered F-list sports stars from the era before colour TV, various idiots and journalists that support the Labour Party.

I have slightly amended the text to make it reflect reality a bit more clearly as below ;


We love Britain precisely because it made us rich.

The British National party and its allies are a threat to everything that makes us proud of this country and everything we profit from. The media is working hard to conceal BNP popularity because it knows that people in Britain totally accept its politics of patriotism and nationalism.

But The BNP's record is clear: unlike the Labour government it has never passed any laws that criminalised free speech, created a surveillance society, brought in ID cards, started two illegal foreign wars, bombed the Serbs and slaughtered Iraqi's - though it would have if it had been elected into power, probably or perhaps not.

Nick Griffin, the leader of the BNP, was found guilty of inciting racial hatred in 1998, as a result of a political prosecution authorised by the Attorney General who was a Labour party appointee, the same as most political dissidents in nations ruled by criminals are found guilty of thought and free speech crimes by their own governments at some time.

He denied that the Holocaust ever took place and though he has since recanted that statement made 20 years ago, made at the same time Jack Straw was in the Communist Party and working with the enemies of Great Britain, the Soviet Union. He also does not believe that the Jews, as opposed to individual members of the Jewish community, are conspiring to brainwash white British people.

Though of course we support free speech except when people say something we do not want them to say and even the UAF have described Gerry Gable of Searchlight as a Zionist and Searchlight a Zionist front group. Rupert Murdoch and Richard Desmond are both Jewish and both use their papers to tell total lies about the BNP, so some individual Jews as well as some individual non-Jews, Like The Barclay Brothers and Viscount Rothermere also tell lies about the BNP. But we mention the Jews as we like to play the anti-semitism card against the BNP, when we really know the majority of anti-semites are within the Labour Party and the Left wing of politics.

We consider Griffin's views to be not only racist but fascist, but we do not consider the Labour party war criminals or Corporate Fascists in bed with the Corporate Media or racists for kicking the Diego Garcians out of their own country: he has previously described the BNP as "a strong, disciplined organisation with the ability to back up its slogan 'defend rights for whites' with well-directed boots and fists. When the crunch comes, power is the product of force and will, not of rational debate". Unlike the BNP though the Labour government can use the British Army to bomb, shell and blitz any countries they order them to invade and steal their oil, even if those British soldiers are heroes being misled by corrupt, money stealing donkeys. Therefore when the Labour government use violence they use it in a particularly spectacular and insidious way on the media for electoral gain and to profit themselves and the corporations that fund the Labour Party and therefore that makes it alright.

A vote for the BNP is a vote against everything that makes this country great, such as our ability to make lots of money. We are determined to vote on 4 June: please join us in voting for a great Britain and keeping the political pig we support in power.

Posted by Defender of Liberty at 00:36

Labels: BNP, Go to the polls to fight hate, stars attack the BNP, the Guardian

I strongly object to Sooty and Sweep being on this list - their signatures (?!) must have been forged! They are anarcho-nationalists!