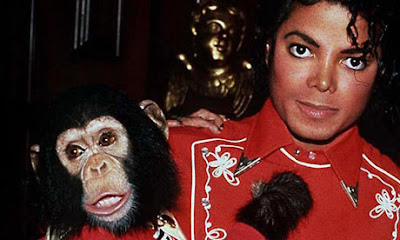 Image - Michael Jackson and the Chimp named Bubbles that he did not blow.


I once worked with a man called Michael so, according to the standards of BBC news journalism as evidenced by their many interviewee’s about Jacko over recent days, I am more than qualified to write an obituary for Michael Jackson.

A friend of mine once actually went to see Michal Jackson in concert and I personally once stood less than a yard from him (though also separated by two inches of bullet proof glass) when he visited London to see his waxwork at Madame Tussaud’s.

Therefore I count myself as friend of Michael Jackson as he waved to me with his white gloved right hand as the limousine he was in sped down Oxford Street.

I felt a connection at that moment, a meeting of kindred souls, and therefore I feel that Michael would have wanted me to write this obituary for him.

In an era when talent became superfluous as regards the accumulation of fame, public acclaim, commercial success and vast wealth - Michael Jackson excelled.

With none of the song writing skills of Otis Redding, lacking the voice of Marvin Gaye, the energy of Little Richard, the passion of Chuck Berry, the musicianship of Jimi Hendrix, the spirituality of Bob Marley, the dancing ability of Sammy Davis Junior and none of the raw talent and sexuality of Prince, the rap skills of Chuck D and the charisma of Phil Lynott - yet Michael Jackson outshone them all, thereby proving that in the era of MTV what mattered was a good video and not decent songs or talent.

Michael Jackson was a plastic personality, both literally and figuratively, in an era of plastic pop music.

He is also the only human who has so far gone from Black to White, had three mixed race children (even though he was a closet homosexual) and then joined the Nation of Islam.

I wonder what Michael though of his half 'white devil' children that he produced via wanking into a cup and then having them impregnate a donated egg ?

He could moonwalk, he could mime and he hired top film directors to make his videos and for the ’yoof’ ( well actually, sad people below the age of 45 who were deprived of a real musical education during their developmental years due to the rise of pop videos and MTV and the replacement of talent and integrity in performers with visuals and publicity ) that was all that was important.

If commercial sales and popularity are more important than talent and integrity then Michael Jackson was rightfully called the King of Pop (though I suspect a misspelling here, as it should have been King of Pap).

His songs were all sub-Disco type shite with trite lyrics obsessed with the loss of girlfriends (which he never really had as he was a closet poof even though he married Elvis's daughter in order to hide this fact, a techniquie which is known in the Music Biz as 'Doing an Elton John' ), Zombies (which he came to resemble after botched plastic surgery operations), the loss of a pet rat (a tragic incident in his youth which in the minds of journalists and pop writers was the soul destroying equivalent of a prolonged stay in Auschwitz) and anti-racism (apparently if we were all pianos instead of people all we ’Ebony and Ivory’s’ would all get along - though we would have to put up with being fingered by Jacko, a not very nice thought).

Jacko’s dad also wasn’t a very nice man to him during his childhood when he was forced to sing and dance onstage for a living and this was the cause of much of his later torment ( though of course his 'plight' was hardly in the same league as being stuffed up a chimney, working in an Indian sweat shop or being a boy soldier in some evil African civil war) and due to this we were supposed to forgive him for his fondness for raping little boys.

After being repeatedly accused of being a serial child rapist, he was acquitted in a criminal trial and, according to people who know fuck all about the law, this made him innocent - the same as O.J. Simpson being acquitted also made him innocent.

What is remarkable is that both Jacko and O.J.Simpson had a fondness for wearing gloves. O.J. liked to kill people whilst wearing them and Jacko liked wearing them on stage. This coincidence may be of interest to psychologists and insane people.

Michael Jackson was fortunately not a West Ham fan as if he had ever sung ’ I am forever blowing bubbles’, at any football matches, this may well have led to serious animal rights abuse questions concerning his friendship and bed sharing with a Chimp named Bubbles who he later abandoned.

After his death the retards in our country, known as Jacko Fans, sent his crap albums back to Number One in the pop charts again - showing that most people really are as fucking stupid as we knew they were.

He died an emaciated pathetic junkie who had wasted hundreds of millions of pounds on a life of utter profligacy and consumerism, having become an icon of selfishness and stupidity in an era when others such as ugly birds with massive plastic tits, talentless singers, overpaid arsehole professional sports stars, inane actors, and ’celebrity’ dickheads really set the bar for such iconic status.

You could have coated a turd in gold leaf and Michael Jackson would have bought it for ten million dollars.

Michael Jacksons main legacy are his fans, the Zombie army of the brain-dead that he first prefigured in his famous Thriller video.

These are the insane ghouls that crowd around the spot where he last shot up and died, who put flowers on the gates of the Neverland ranch where he did most of his child raping and sodomising of little boys and who are seen onstage at the MOBO awards doing idiotic copies of his crap dances in order to provide solace for a generation of blacks in America who were raised without any positive role models in the mass media except gangsters, killers and crap rap and pop stars.

Today the weep worlds for Michael Jackson, though tomorrow his memory will be just another soggy crumpled Kleenex in the dustbin of history.

Within a decade his albums will be bargain bucket specials and the thriller video a cultural ‘comfort blanket’ solely for the ‘yoof’ who never grew up and who never knew what real musical talent was.

Bullshit, Lee. Have you ever worked a day in your life?

MJ kids, from what you can see of them,they dont look like MJ was the father.

Lee, you've expended a lot of space on Jacko's death. How about a few words on the passing of Farrah Fawcett, who has been so cruelly overlooked by the mainstream news media?

Do you really believe that MJ is biologically related to any of those children?

One of them is blonde.

In order for a blonde to exist both parents have to possess the blond gene and pass it to the child - now Jacko may have had white DNA in him (which most African Americans have ) so the question must be answered possibly ?

Is he the one on the left in the picture?

I don't believe he's the bio dad of any of the children. The first two show no physical evidence of recent racial mixture. I can see if one of the children appeared that way but both? The youngest child supposedly has a black bio mother. If that's the case, MJ could not be the father since the child appears "too light" with straight hair to come from two black parents. I think that the sperm donors for all the children are white.

I also believe that he was "asexual" as strange as that sounds.

I believe he was homosexual - as a result of what happened to him as a child.

Apparently when he was in the Jackson 5 and still a kid his brothers used to sneak groupies back to their hotel room and they used to have sex with them in front of Michael.

Raised in a strict Jehovah Witness household he probably felt disgust at his own sexual desires that arose during these group sex sessions when he used to watch his brothers and this twisted his sexuality towards being a homosexual. The sexual feelings he sublimated for women as a result of this guilt over feeling sexual desires as he watched his brothers drove his sexuality towards a repressed homosexuality.

I belive this was also the basis of his paedophilia - he was sexualised as a child and later repeated this process and sexualised children.

I know what you are saying about the looks of the children but the fact remains that he, as an African American, did have at least 30 % white DNA in him as do most African Americans whose ancestry is truly American.

Therefore when he had kids with a blonde white woman then they stood a good chance of being blonde.

"In an era when talent became superfluous as regards the accumulation of fame, public acclaim, commercial success and vast wealth - Michael Jackson excelled."

Remember folks, in the immortal words of Wacko Jacko:

"It don't matter if you're black or white"

Oh, except if you are actually Wacko Jacko and you bleach your skin and have cosmetic surgery to reduce his negroid features in order to try and become white - is that irony or just the sort of meaningless bullshit that is spouted by these commercial psychos?! Personally I think it is the latter.

Well Lee according to your FF post you were sexually awakened as a young man/boy...

Are you OK now?

Or are you still a fucked up Virgin...

As a follow up from my previous post, I am not saying their is anything wrong with negroid features (just like their is nothing wrong with caucasian features)... it just seems very odd that Wacko Jacko would centre a song around the line: "it don't matter if you are black or white" when he was actually trying to make himself white, which shows that it obviously did matter to him.

Thought I would make that clear before all the idiot lefties start spouting off all sorts of bullshit.

I dread to think of the horrors of sexual depravity Bubbles endured at the hands of Wacko Jacko?!

You really are a poisonous little turd aren’t you lee.