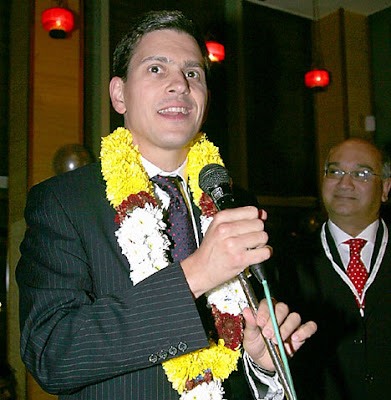 
How sickening is it to see David Milliband, the unctuous slime ball who is trying to oust Gordon Brown, talking about fighting fascism.

The only fighting he and his family ever did against fascism was in order to ensure the victory of the Communists and the era of death and mayhem that followed the rise of the Soviet Union.

Hearing this little turd talking about fighting fascism when his family were fighters for the most murderous regime in history is appalling.

This little creep is part of the most fascist government in history and he also voted for the genocidal Iraq War in order to benefit the US oil barons and Israel, of whom he is a strong supporter as he is Jewish, a fact he frequently likes to throw into debates in order to silence any criticism of his own support for Zionism and New Labour fascism.

Every day since New Labour was elected has been a day of shame for this country.

Those disgusting pigs with their fat chops in the House of Troughminster have disgraced the name of this country and British politics.

For this scum bag to attack the BNP is like the devil accusing the angels of being sinners.

David Miliband is the son of Ralph Miliband, born Adolphe in Brussels in 1924, and Marion Kozak. Ralph was a well known Marxist political theorist. Ralph, who died in 1994, is buried in Highgate Cemetery close to his idol, Karl Marx.

David's brother, Edward Samuel Miliband, is also a member of Prime Minister Gordon Brown's cabinet where he has been chairman of the Treasury's Council of Economic Advisers, which directs the UK's long-term economic planning.

The online biography of Adolphe "Ralph" Miliband says he was born in Brussels of Polish-Jewish emigré parents and that both his parents lived in the Jewish quarter of Warsaw, before his father, Samuel "Sam" Miliband, joined the Red Army in the Polish-Soviet or Bolshevik War (February 1919 ­ March 1921).

Sam Miliband is said to have left Poland after the First World War, which ended in November 1918. He supposedly became a leather worker in Belgium and then returned to Poland to join the Red Army under the command of Leon Trotsky (born Lev Davidovich Bronstein) in 1920.

The commanders who served under Trotsky in the Bolshevik War against Poland were Mikhail Tukhachevsky, Aleksandr Yegorov, Joseph Stalin, and Felix Dzerzhinsky.

Nikolay Bukharin, writing in the Soviet newspaper Pravda, urged the Bolsheviks to carry on beyond Warsaw "right up to London and Paris."

Why would a poor leather worker in Belgium give up his work and travel all the way to Poland to fight with the Bolshevik Red Army against the Polish Republic and the West? If this is true, Samuel Miliband must have been a very dedicated communist.

This is, however, most certainly not the whole truth. The family tree of the family of David and Edward Miliband clearly indicates that their grandfather Samuel Miliband was also born, like their father Adolphe, in Brussels in 1865. In this case, Brussels-born Sam must have been an extremely dedicated communist. There is another possible explanation. Perhaps Sam was a Zionist emissary on a mission to bring support and funds to the Red Army in their attempt to conquer Poland. If the family tree is correct that Sam Miliband was born in Brussels, there is something more to the Miliband story.

The Miliband family tree provides the names and dates of birth of Samuel's 11 siblings, his parents, and even his grand-parents, data which supports it as a credible source. Why then has the Zionist-controlled media obscured the Miliband family history and pretended that David's father was born in Warsaw, when his family records indicate he was born in Brussels?

This is information about the Miliband family that the media had evidently decided that the public does not need to know. It also suggests that the preferential treatment and promotions that the Milibands have received since coming to Britain have more to do with their high-level connections than with their abilities.

Your obsessive hatred for Jews is now glaringly obvious and your knowledge of what is going on in the ME is in severe lack.

Try to study with an objective viewpoint what the US has been gradually doing to Israel since Dhimmi Carter's reign and look at what has happened to the UN and how it treats Israel. Look at what the black messiah is now trying to do - ethnic cleanse Jews from their own land.

Try to get this simple fact inside your head: There is no such state as Palestine. There are no such people as Palestinians. There ALREADY is a 2 state solution it's called Jordan and even they realised what Arafat's game was and killed around 20,000 "Palestinians" in one month. This is all about ISLAM. Nothing else. When will you and the other jew haters realise that what is being done to Israel and Serbia is going to come to Europe? IT IS THE SAME GAME.

A Europe dominated by the left, a left who, as ever, hates the Jews. And you lap up their anti-Israel anti-jew propoganda and dress it up as "anti-Zionism". Same meat different gravy.

To say the war benefitted Israel is just plain stupidity and if you really want to see who has benefitted the most then study ME politics and in particular two countries who have benefitted far more from the gulf wars than even the US has and neither shed a drop of blood to achieve it. It was about a lot more than oil, a lot more.

And the US is no longer our ally, it is now applying the same polices against Europe and GB as it deploys against Israel. Turkey in NATO and in the EU? That's what the US is pushing for. Why do you think that is Lee? How do you think Arafat brought Europe to bow before him and create the sunami of Muslim immigrants into the EU?

There is a huge change in global politics thanks to what has and is occurring in the ME and your seething hatred of Israel and Jews blinds you to it and it's a real shame because otherwise your blog is excellent.

Lee I think we really need to use the term "Pseudo" Marxist.

As far as I am aware Marxist no leaders like to redistribute their own wealth only other peoples, so we should not give them a title that may give them a feeling of rightious selflessness.

They are as greedy and self serving as the next man - if not more so with added ignorance and insanity, clearly illustraited by their own actions and considerable wealth (Galoway) and nepatistic dynasties(Ben, Kinock, prescot, mandy, Goul, rubberbands etc, etc)they are a walking breathing contradiction!

If these people were not so dangerous and destructive to the working classes it would be laughable.

Bloody hell.
Again Lee the undertone of racism is present in your writing. Wasn't similar rhetoric used in the late 1930's?

Chris, you're a racist against palestinians. When are you going to get it in your head that your, and unfortunately many other Israelis attitude, does more harm than good to your own cause. All it fosters is ill will.
Your tired old argument has been heard and rejected, injecting the word "Islam" into it changes nothing.

How can I be a racist against Palestinians when there are no such people?

As for "tired old argument has been rejected" = who by? The jew-hating left and fools like you who have fallen for the biggest act of al taqqiya. Study the history of the ME prior to 1967 and while you're at it, studt what sharia says about dar al Islam becoming dar al harb.

Get it in your head: It isn't about Israel or the chimera of "Palestine" it is about Islam and refusing to acknowledge it is one of the reasons why Islam is taking over the world.

Well said. He is extremely foul, along with the other slimy ass holes. He is also top runner to get the new Foreign Ministerial job at the EU.