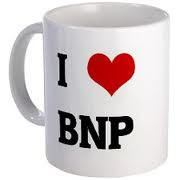 Image - a photo of one of the BNP members paying for Griffins cock ups. Total mugs.

First of all Griffin turned up 35 minutes late to court.

Shows lack of respect to the judge and court, so he got a bollocking for that.

Not a good start.

The Griffin proceeds to pull out a pile of documents and tries present them to the court.

Documents and arguments have to be served weeks before a hearing so the other side can read them and prepare rebuttals and submissions.

Another bollocking by the judge who refused to allow Griffin to present the documents in the hearing.

The judge then adjourned the hearing until November the 9th.


Now another hearing in November = at the very basic costs again of ten to fifteen grand for that hearing.

He wont go to jail, as that is what he wants, so instead there will be huge fine in lieu of contempt = twenty five thousand to fifty thousand pounds I estimate.


But hey, you BNP Griffinite cult members are paying for it.

But Dowson will now launch another appeal for more money, shave another 10 % from the donations and walk away with money the BNP should be using for campaigning.

Posted by Defender of Liberty at 08:04

The case has been adjourned for two months, which gives us plenty of time to raise the funds to cover any additional costs.

There is no evidence that the adjournment had anything to do with Nick being late and even if it did any extra costs will hopefully be covered from incoming funds during that period.

In the meantime Nick has bought some more time to prepare his case, which in case it had escaped your notice is the BNP's case.

The adjournment was a good result for the BNP. It is important now that members and supporters to continue to donate to keep the party's defence of track.

Only an enemy or a traitor would seek to dissuade anybody from donating under these circumstances.

Oh yes and I forgot to add Barnes you are a cunt.

No, its not the BNP case - the BNP case could have been avoided before this farce began, but Griffin wanted to use the case to promote himself and for the publicity whilst drafting up his pathetic joke of a Stalinist constitution - so its the Griffin case, as Griffin has fucked it up at every stage.


Yeah its important you keep donating to keep Dowson rich and so Griffin can waste the money.

DO NOT DONATE A PENNY TO THE BNP.

IT IS A WASTE OF MONEY.

SAVE IT FOR WHEN GRIFFIN FUCKS OFF AND DONATE IT THEN.

ITS THROWING GOOD MONEY AFTER BAD IF YOU GIVE MONEY TO DOWNSON AND HIS CHUMP GREEDY PET MONKEY GRIFFIN.

Until Griffin goes and with him Dowson, then the BNP can go to hell.

You donate to the BNP it goes straight into the pocket of Dowson and is flushed down the drain by the idiot pig farmer Griffin.

If you donate to the BNP you are assisting the most incompetent leader in British Nationalism to stay in power and making his pet crook pervert Dowson rich - you do that you are more than a traitor, you are a total fucking mug.

Ha ha ha ha Griffin the legal genius with his super duper constitution will beat all the lawyers in the EHRC - do you want to buy a unicorn ?

Griffin has a busy time in November- he goes to Newcastle 29th re: the Smith/Dawson/Blake debacle which will cost us members even more.

You're the fucking mug Barnes.

Where will you go when your deformist shit faction disappears up its own arse?

You can't take over the BNP, you lost the leadership ballot by a mile and next year it will be 25% and half if not more of the deformists will either have been expelled or will have resigned or not renewed due to them being a disorganised shambles.

If the BNP were to go under due to debts (which it won't) we will call ourselves something slightly different and carry on as before, with Nick at the head everyone will recognise us as the true BNP.

So you can't get any power through staying in the party.

And yet, for as long as the BNP or something similar exists, you will always be chasing your own arses and playing second fiddle to the main party.

So you and your shit faction are stuck where the sun doesn't shine aren't you Barnesy Boy?

In the meantime any deformist traitor who hangs around for too long will get the 1987 treatment and Butler will know what that means. We are the experts, seasoned veterans. Half your supporters will shit themselves and fuck off when that happens.

So who exactly is the mug Barnesy Boy? Nick Griffin and all of us loyal supporters have the indian sign on you and you are going nowhere fast.

So why not accept the game's up and fuck off and die you cunt?

Issuing threats are we = typical keyboard warrior nobody mug.

Expert in being a tosser.

Best you clean your bedroom up you moron, your mums really angry at the state of your room.

The next phase of this totalitarian law comes into force in April 2010, the parts that Griffin refers to today may still be deemed under the old 1975 Race Laws in November?

Only the first part of the Equality Act 2010 comes into force in October, there are other parts to follow.

The Code of Practice for Equal Pay has been laid before Parliament and other Codes are in the pipeline."

I note a lot of idiotic comments posted here, Lee has done some excellent work understanding how to put a proper, intelligent and legal constitution together, show him some respect!

I think Griffin thinks he can box clever but this forthcoming ghastly anti-White law appears to supersede the old Race Act. I don't know if he can mount a sucessful defence saying he was prosecution under an old non-existent law come November?

"A new Equality Act will come into force on 1 October 2010. The Equality Act brings together over 116 separate pieces of legislation into one single Act. Combined, they make up a new Act that will provide a legal framework to protect the rights of individuals and advance equality of opportunity for all.

The Act will simplify, strengthen and harmonise the current legislation to provide Britain with a new discrimination law which protects individuals from unfair treatment and promotes a fair and more equal society.

The nine main pieces of legislation that have merged are:

A deformist traitor who hangs around too long will get the 1987 treatment.
Ask Eddy?
Do you mean we'll all go bald?

Threats to Lee Barnes(age 14) and others doesn't really sound that good to me.
Every time you write something like that it:
a) Galvanises the thoughts of reformers.
b) It chases away prospective members
c) It doesn't make you look that good if I'm honest
d) You drive a bigger wedge in.

I don't know if your bedroom needs tidying or not and it's not any of my business as where I place my allegiance within the nationalist movement is nobody's business but my own.
I want transparency,honesty and sound leadership.That's a bad thing is it?
Are there some people in the BNP only pretending to be reasonable law abiding people? Isn't that as bad as being an MI5 or marxist mole. It's certainly just as deceitful.

I note some PATHETIC AND IMMATURE comments on here.
If the morons ( i cannot think of a word to describe the idiots (short of swearing, but they do enough for all of us!!)think that what they say will have any effect on Lee other than amusement they are living in cloud cuckoo land.

It doesnt work you twats.

I applaud Lee for having the guts to put up on his blog what he does.
I also applaud Lee for everything he has done for Nationalism over the years.
I would like to see these morons having the same track record of achievement. AS IF.

Some of the comments on here i would expect from a spotty unwashed red, not someone who calls themselves a Nationalist.