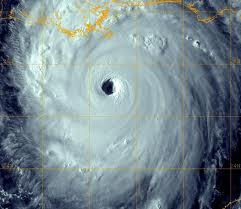 I wrote this on the anniversary of Hurricane Katrina.

The poem mixes the history of New Orleans with the voodoo goddess of storm, Mambo, and its reputation for ghosts.


Mambo is dancing wildly over New Orleans,
A goddess of pagan, primal power,
And as the city flees in fear and panic,
From her frantic, mantic havoc,
Down every street people are dying,
As the dark, reeking waters keep on rising.

And in her monstrous blind, black eye,
So grimly churning, and all consuming,
A cataract of white unwinding cloud,
Opens wide enough to see for an instant,
The moon, as a fleeting glinting ghost,
Swinging in the sky as if upon a gibbet,
For the hounds of hell, her cruel companions,
Now howl on the wind, seeking fresh carrion,
Hunting down the dying and the drowning,
All those left to die in their low housing,
Whilst thunder drums the starless night,
As if regiments of redcoats were in full flight,
And riding the sky, to attack and then fight,
With their swords raised high shouting 'advance'
And rusty rifles firing, fierce flashes of lightning.


Now only the ghosts of New Orleans remain,
In memories and rotting shacks of shame,
You can hear them when a North wind blows,
And wind chimes rattle their old dried bones,
In the song of a saxophone playing at night,
Whose last note is heard, at dawns first light.

Nice poem.
You're alright y'know.
I'm not as well read as you obviously are but I like you.
Keep on keeping on.

the ghost
comes back to life
in the gray morning she leads her black children to the old store
with her hands full of shopping bags and babies
meanwhile black men with hammers in their hands once again put the shingles on the old roofs and hang the fallen shutters and then
in the afternoon when the sun shines red in the hazy west horizon
you hear
the lazy sound
the first wail of the trumpet
the soft dancing notes of the piano
and the forever lazy smile of the big easy as the night magic weaves its timeless spell .

It captures the essence of the place,