The Rainbow Nation and its Racism 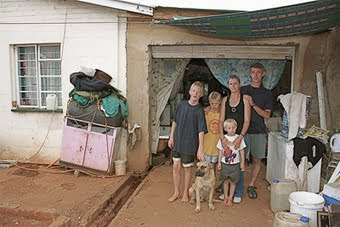 
A story of white poverty in the new South Africa

Hendrik and Mara, an elderly white couple live in the suburbs of Johannesburg, South Africa. Each day Hendrik drives his pick-up van and collects food from various big food stores who donate their expired food and distributes it amongst the poor people in his neighbourhood. These families, who have lived here most of their lives in what was once was a respected middleclass area, have lost their jobs and live in dire poverty.

But it can always get worse. Many whites have lost their homes and move to squatter camps. Shacks and tents can be found on farms hidden far away from the public eye. Occasionally you may see a white beggar at the traffic lights, but in general most South Africans deny that there is such a thing as white poverty.

More than 40 000 whites, of a total 4,5 million South Africans are currently classified as absolutely poor and live in informal settlements. The largest squatter camp is Coronation Caravan Park in Krugersdorp. It’s a former picnic spot by a dam and its home to more than 350 people.

‘Die swak blankes’ have always been a topic in South Africa. When the Apartheid principles gained more support during the 1930’s, the protection of the white population from a life of poverty on the farms became an important political goal since poor whites undermined white supremacy. This took place by state interventions, in the form of government jobs, education, health and social security. However, with the transition to the ANC government white poverty has become visible.