The Killing of a Whale 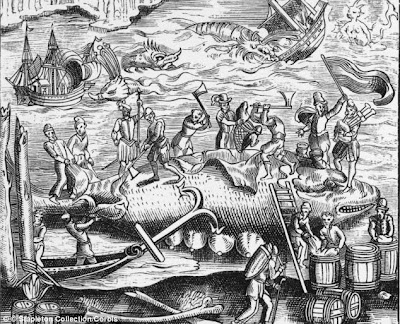 I wrote this after reading the article in the Daily Mail below the poem.


The poem is not just about the killing of the whale and its dissection, the whale also represents the conquest and subjugation of nations as a result of imperialism.


The child watches the killing and sees his father enjoy it and offering his advice as he is an ex-soldier, well versed in such butchery, which is the price borne by the soldiers sent to create Empires.


The bells of S.Pauls cathedral were ringing,
And hundreds lined the river singing,
As the fishing boats began dragging in,
The white whale and all of its sins,
As their prize on the tide of the Thames,
Whose red waters had risen in full spate,
To deliver that terrible fate that awaits,
The dying victim and its all cruel blessings.


It splished and splashed upon the shore,
Dying in the reeking muck and mud,
As their iron hooks snagged,
And their bill hooks slashed,
Peeling away its thin black skin,
To reveal the riches that lay within,
Its baleen, bones and golden oils,
Those bands of precious blubber,
And the red, red meat that lay beneath,
That only rich connoisseurs could afford.

Father laughed at its last gasps,
For he had been a soldier once,
And as the butchers flayed its flesh,
Hacking it alive into chunks of meat,
He shouted out his own suggestions,
As how best for the deed to proceed,
To the redcoats in the mire below,
And soon each part of its bulk,
Had been sliced into sections,
And readied for transportation,
Then into those waters of murder,
Plunged horses pulling tumbrils,
Carrying their wares as if from war,
To be sold in Billingsgate market.

Father held my hand to stop me slip,
On the slick, black, bloody clots,
Which had flowed from every cut,
During the expert evisceration,
Its dissection on the public stage,
A most macabre form of entertainment,
Until night as a curtain finally fell,
And the crowds then fled in fear,
As out from the city in hungry packs,
Feral dogs came, too wild to tame,
To feast upon those meagre scraps,
That the killers had left behind,
Each red beast with hackles raised,
Roamed the reeking, open grave,
And fought for their very survival,
Biting, barking, hunting and killing,
Drenched in blood from head to tail,
Growling in the rotting guts of the whale.

Hi Lee ,
Excellent work .
As an aside do you think Nick Griffin could be the reincarnation of Captain Ahab from the story Moby Dick ?
After all Ahab led all but one of his crew to destruction , although in that case destruction came to Ahab too .

Lee,
You should check-out the Youtube animations of 'Nantucket Sleigh Ride' - not only a rollicking good prog rock tune, but it's illustrated with some pretty horrific 18th century wood-cuts of whale murder.

Another good poem. I have Nantucket sleighride by Mountain on vinyl. Not a bad track on it. Check it out! Felix Pappalardi at his very best!