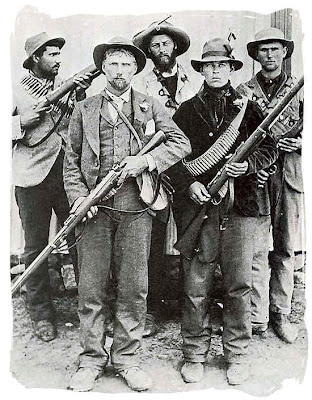 
BNP groups will be sent a fantastic load of old tat to peddle to their mugs, sorry members, such as a picture of Lord Kitchener saying ' Only the BNP can end the Boer War', a few posters of some sullen looking Boers lurking amongst some rocks in the South African veldt and some leaflets that highlight the fact that the Boer war is now a major issue of concern to British foreign policy.

Barnes you are a mole simple as that Griffin outed you in his article. you won't print this but (1) you will not say outright that the party is now broke because Griffin stole money, because you would be sued in court and loose your ass. so you repeat others allegations so you can not be prosecuted
(2) Griffin just posted a detailed irrefutable history of the moles in British politics, quoting the published works of the moles themselves
you called that garbage and said people do not need to read it. just listen to you I suppose Hmm.

I have been saying griffin has swindled money from the BNP with dowson on this blog for weeks, you fucking mug.

He can sue me any time he wants.

He knows my address - and I would LOVE to get him in court and get them disclosure rules to get hold of the true accounts and find out about all the money that has gone through dowsons sweaty hands.

As for griffins old bollocks in the article, he has been repeating that old bollocks for decades, its only mugs like yourself though that still believe it.

Now jog on, you mug.