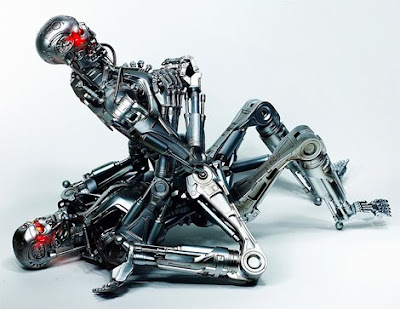 Image - Terminator sex robots have been sent from the future to seduce BNP members into becoming critics of Nick Griffin.

Here is a short precis of Griffins latest article just put on the website ;

" Anyone who says anything I dont like is a red, a fool, jealous or embittered ".

That short precis will save you having to read through page after page of Griffins boring, tedious, predictable bilge.

Then all those doubts about the pervert Dowson, the party being bankrupt, the allegations of sleaze and corruption, the allegations of nepotism and croneyism, the incompetence of senior officials, the missing accounts, the failure to provide the accounts to the EC, the missing money - all these issues will simply vanish away if you close your eyes, think of Griffin and BELIEVE.

Christ almighty - the man is a maniac.

And even worse than him are the muppets that believe his old bollocks.

Its just the usual, sad, trite nonsense from a sad, shallow man in a delusional state.

What is truly tragic though is that the usual idiots, about ten of them, are lining up to applaud his 'insights'.

One day the idiot will think of something new to say, such as the people who are attacking his incompetent and corrupt leadership are in reality terminator robots sent from the future to destroy the BNP before it can come to power in Britain.

At least that would be an interesting analysis of the present crisis in the BNP.

Instead we get the same old bollocks that Griffin has been peddling to his idiot followers for the last four decades of his involvement in nationalism.

Simply put 'blame everyone and everything but me for whats going wrong'.

This is what Griffin wrote in August 1986 when members of the NF directorate dared to vote against Griffins orders, and like the Stalinist nutter he is, he suspended them all ;

In his Press Council defence, the GUARDIAN journalist David Rose went on to make the amazing revelation that his N.F. informant had also joined him in two day long meetings with the infamous Zionist SEARCHLIGHT hack Gerry Gable. It is of course just possible that Rose made up this story to encourage suspicion within the N.F. leadership. But such a possibility is not a good reason to block any investigation into the allegations at all. Yet this was precisely the irresponsible attitude of Wingfield, Acton, Nash, and Brons at the Directorate meeting which heard a series of charges against Anderson.The full story of how they schemed, lied and rigged the agenda to get Anderson off will be told later in this document. In the meantime, the reader should just bear in mind the fact that the desire to protect a member of their secret faction prompted these corrupt individuals to ignore completely one of the worst breaches' in security which the National Front has ever suffered.


These reds, jealous fools, embittered rascals and idiots were Martin Wingfield who is now the editor of the Voice of Freedom and Andrew Brons who is a BNP MEP.

As he did then, as he does now, he just uses the same old bullshit and same old lies to excuse his own stupidity and incompetence.

Griffin never changes, he just peddles the same old shit to a new generation of nationalists year after year after year - he is the Rain Man of British Nationalism, a political autistic unable to escape his own insanity and inanity.


He really is just so utterly boring and predictable.

Posted by Defender of Liberty at 12:50

Skynet deploys it's most advanced weapon against humanity in 2010 - behold: NST1000 - Nazi Sex Terminator. It can morph a vag or phallus, or both, or neither in milli-seconds, depending upon the sexual preference and/or deviance of it's target - the most sophisticated weapon ever developed to destroy the knuckle-gragging Nazis of the early 21st century!

FPTP places a terrible burden on "outcast" parties that reject the official state-media-university ideology of PC-Multicult-Cultural Marxism. IT's hard to recruit good people when they know they will have to endure intense state persecution and still have little chance of political success in the vast majority of cases.

Someone(who?) should start a campaign for STV or PR list for local and national legislatures.