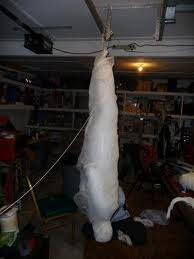 This is a poem about religion and the media.

They are the spiders that feed on fear and who transform the infinite human soul into cells of terror afraid of damnation, hell and the latest media induced social panic.

A sinister black spider waits in its web,
Of white silken lies, it spun to entwine,
Its prey in snarls of fear and illusion,
Cocooning each within a cell of terror,
Paralysing them for its cruel pleasure,
Its passion, the slow rape of all reason.


Those fangs dispense a subtle poison,
Into all open eyes, minds and ears,
That seek to see, to think and hear,
Until its victims become new spiders,
And slowly transformed by the toxins,
That each lost soul has ever absorbed.


Then each starts to spin thin threads,
To form fresh webs around themselves,
Where they hang in mental torment,
Suspended from the fragile filaments,
Entombed in a womb of the material,
So far from any hope of redemption,
Each feeding upon their own cold fears,
In a silent black void, wet with tears,
Until at last comes that saviour death,
To eke each soul from its imprisoning flesh.

Make $3000-$40000 A Month by Using internet At Home, Internet is quickly growing into a world-wide marketplace, which provides a unique opportunity for everyday people like you and me to cash in on it and start making money online!make $300 per day