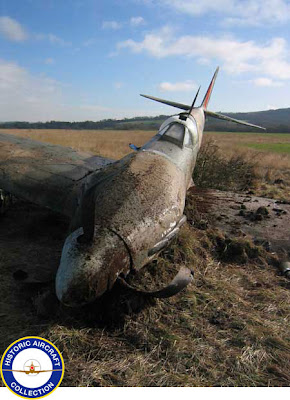 In the lee of an English field, they lay,
In shallow graves of dank, dark clay,
The bones of those who dared to fly,
And etch their names upon the sky,
In wars cruel season, as raptors hunting,
Turning, turning, with all guns firing,
Too late to see, that death had come,
Tumbling aflame, fell from the sun,
To become the wreckage that remains,
Torn from its roots by rasping ploughs,
Nuts and bolts, tubers of rusty bullets,
The sleek machines exiled from heaven.

The leonine purr of Merlin engines,
That hunted high puffs of cloud,
Seeking prey to rake with bullets,
Slow droning bombers who came to kill,
The bark of elm and oak remember still,
Those lonely souls long buried here,
Who fell on fiery, folding wings,
So far from earth, homes and kin,
No poppies sprout to mark their loss,
Nor words on any white stone cross,
But the landscape retains their traces,
Amidst the silence of all such sacred places.

Posted by Defender of Liberty at 01:22

These poems would make Great songs, along the lines of Into the west sung by Annie Lennox.

Anyway, The chemical war against the West.

There is of course the protocols which most people know of or at least heard of, there is another document, unearthed in the 80's called.

Silent weapons for a secret war.


You can read Silent weapons here :-

Obama's mentor Brezinski has said, pretty soon, the public wont know anything but what we put out through our media.