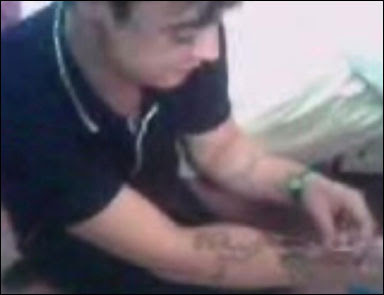 Image - UAF role model Pete Doherty and ambassador for Multi-culturalism in the UK according to Gordon Brown.


You know a politician is desperate when they use the results of a meaningless TV talent show as the basis of a claim to the moral and political high ground.

Gordon Brown, in one of the most trite press releases ever to leave 10 Downing Street, has announced that the win of a troupe of dancers on the TV show Britains Got Talent shows us that multi-culturalism is working, mass immigration is a good thing and the destruction of British culture and its replacement with some facile variant of American Rap consumer culture is great !

Whoops ! He already has done hasnt he, the sad little desperate man.

If the future of Britain is rap music, the demographic takeover of the country by immigrants and the erosion of British culture - then I hope the British people will be very happy in the insipid, politically correct, crime ridden rat hole that will result.

Diversity my arse. This sort of trite sub-breakdance rubbish is just sooooo 1980's.

The fact that some people are so trapped in TV media 'la la land' and enjoy this stuff shows how trivial our society and some sections of the public have become.

No doubt the phone lines were manipulated by the media and various other shadowy figures to get this result.

We all know how trustworthy and reliable the phone in lines for TV shows are dont we !

I hear Gordon Brown's next press release will be ;

" Pete Doherty has attacked the BNP. Pete Doherty is a superb role model for our children. He is a living example of the wondeful multi-cultural fusion of our country. Pete uses syringes made in the UK to inject heroin made in Afghanistan, imported into our country via Turkey and sold on British streets to young white people by Islamist criminal gangs who use the money to fund the Global Jihad. This is a wonderful example of how diversity is working for our country. "

This really is becoming farcical.

The economy is screwed, crime is rife in inner cities where we now have no go areas, there was an anti-muslim riot in Luton because muslims mocked returning British soldiers - ones who haven't been sent back in coffins that is; MPs have been creaming off taxpayer's money for their own gain during a recession and Gordon Brown says multiculturalism is working because some bunch of talentless gimps win a TV talent show?

It's true - Gordon is a moron.


WATCH this interivew the presenter is libel against the bnp no doubt 3-4 Times. utterly shocking Andreew Neil Surely we can take him down for this

We all know its fixed and is simply a method by which the sheeple are conned into thinking thier voice counts. So when I watched the BGT episode with ' Diversity ' on I said to my wife there and then 'they'll win - just check out the name and the result will come in just before the EU elections '
She didn't believe me and still believed the hype that the Boyle woman would win.
Where's your £20.00 Mrs Tait ?

Well the people who watch crap shows like this " circuses for the masses", tend to be a bit brain dead anyway. Saturday was a beautiful English summer's evening most sensible people i.e. the people who will vote on Thursday were otherwise engaged. As for rap it is the product of 1980s gansta culture and if Britain thinks this is talent well God help us!

In the same interview the traitor Brown also said he had spoken with Simon Cowell and the former editor of the Mirror Piers Morgan about Susan Boyle's welfare.
I wonder if he took the time to contact the families of the two soldiers who gave their lives for HIM in the dust of Afghanistan in that unwinnable war.

I forgive you for your sins.

In order to atone for voting for this bilge, and watching such crap in the first place, you must leave ten comments on the BNP site and watch The Great Escape twice.

That is the only penance you can do to atone for your sins.

The same goes for anyone else that voted for this rubbish or watched it.

You should have been leafleting, writing blog posts or doing something for the cause people !

When is the last time that dirty pig mentally-deranged, Gordon Brown took a bath?