Peak Oil and the Credit Crunch 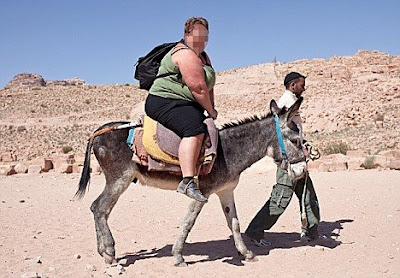 Image - Western civilisation atop the oil donkey. We are too fat and the donkey getting too old. Both fall together.


Excellent story below with some interesting facts and opinions.

But in his new book, "Why Your World is About to Get a Whole Lot Smaller", Jeff Rubin argues that globalisation, fuelled by cheap oil, is finished. In the book, Rubin contends the current global recession is a result of expensive oil, rather than subprime mortgages in the U.S.

Frequently ranked as Canada’s top economist, Rubin predicts that one barrel of oil will cost 225 dollars by 2012. Other analysts consider that number outlandish; the conservative National Post newspaper, where he was frequently quoted as an economic expert before leaving his job at CIBC World Markets, accuses him of "anti-materialism" and "Big oil paranoia."

Rubin sat down with IPS at his hotel after giving a lunch address to the Vancouver Board of Trade.

IPS: If Iraq’s security situation improves, and its cheap oil comes back online for export, could that stop your prediction of 225 dollars per barrel by 2012?

Jeff Rubin: Not even close. Nor would it stop the prediction that exports from OPEC (the Organisation of Petroleum Exporting Countries), instead of growing, are likely to fall by about one to one and a half million barrels per day over the next four or five years.

It’s not just about depletion [of OPEC oil fields], though depletion is playing a key role. It is also about the explosive growth of oil consumption in OPEC countries themselves. This is the reason why exports have not grown from OPEC in the last five years; they are in effect cannibalising their own exports.

IPS: If the world economy can function with oil at 140 dollars a barrel, are there not huge reserves of unconventional petroleum - oil shale in Utah, heavy oil in Venezuela’s Orinoco belt and deep offshore deposits - that become viable to exploit?

JR: What happened to the world economy when oil hit 140 dollars? Is this deepest recession in the post-war period really about the U.S. subprime mortgage market? Or is it about 140-dollar a barrel oil? I’d argue it is about a 140-dollar barrel of oil.

IPS: At what point does the price of oil make export-driven globalisation untenable?

JR: The model as we know it peaked in 2007. If we measure globalisation by the percentage of world GDP that is an export or an import, 2007 will mark the peak of a past age.

But what moves those container ships is oil. At 150-200 dollars per barrel, the wage arc becomes pennywise and a pound foolish because what you save on a wage bill you more than spend on bunker fuel.

IPS: Some analysts estimate that 25 percent of the world’s hydrocarbons are located in the Arctic and will soon be open to exploitation due to, ironically, global warming.

JR: The stuff in the Arctic is a drop in the bucket. You are losing sight of what the Cambridge Energy Research Associates and Exxon don’t tell you about. They hold big press conferences to talk about ‘oh we just discovered the Jack Field - 10,000 feet under the hurricane ravaged waters of the Gulf of Mexico, isn’t that fantastic’.

They don’t hold press conferences [to announce] ‘see this field here? It has been producing for 50 years. It’s about to run dry.’

IPS: Even if you are correct that supplies of cheap oil are dwindling, couldn’t increased efficiency make up for shortfalls in production?

JR: We think that efficiency leads to conservation but history has shown that is not what happens.

The average engine today is 30 percent more efficient than the engines produced before the OPEC oil shocks [of the 1970s]. Yet, the average [North American] vehicle consumes just as much gasoline in the course of a year.

IPS: What do you think is a bigger threat, peak oil or peak water?

JR: Peak water is a whole other ballgame. But let me tell you a place where peak oil and peak water intersect: the Canadian oil sands. To produce one barrel of synthetic oil, you have to burn 1,400 cubic feet of natural gas, schlep two tonnes of sand [and] pollute 250 gallons of water.

Just like carbon emissions, water is free. If you are an oil sands operator and you pollute 250 gallons of water, it is costless.

Posted by Defender of Liberty at 07:30

Peak oil is a slow rising problem that can be solved, through technology and management.

To keep banging the Peak oil drum when almost no effect will be seen is not a good strategy.

It comes across much like the global warming lie, as while peak oil is not a lie the effects are slow and slight almost inperseptable, after a period people just switch off.

While keeping an eye on all issues is good, highlighting this one does not gain us any further credibility.

We are starting to sound like the carbon emission nut jobs.

I am not sure how you think peak oil can be solved - that the stuff is running out is a geological fact and absolute. It gets 'solved' by 1) finding other sources of energy, and 2) reducing use of oil, which means being more efficient AND, the taboo which is never discussed mainstream, of world population numbers which need reducing.

I don't feel that this Peak oil drum is banged about as much as you think, I have hardly ever seen it on mainstream media or sources. Yes it has been sporadically discussed on the BNP site (though is tucked away) and on Lee's Blog more so. For such an epoch changing topic, and it is - consider that ALL we take as granted WILL change or disappear. For a blip of luck in having this magic black stuff in our lifetime and our parents lifetime has made us incredibly spolit to a level never previously experienced in human history.

Surely it is a topic that needs at least a spotlight - no it doesn't shadow everything else regards BNP vision?

Yep, global warming as put to the world's public is, I have increasingly been thinking, a lie of sorts. Any measured warming, and it did up to the early 2000s, could be due to any reason non-man-made.

It is easier for the world's establishment to say we must cut back on fossil fuel because of climate change as it is not as worrying to say that that fuel is RUNNING out and we will have none, at least not without resource wars etc. That is not to say we should not behave with more responsibility to the planet's resources and natural world, of course we should, and then some!

I think you're inaccurate to say that the effects are 'slow and slight almost inperseptable'. You will see the repeated peak and trough patterns of oil prices over the coming years, each time becoming more extreme. In a global system such effects are huge. Needless to say this latest depression (though I never understand the logic of so-called perpetual economic growth)is in part attributed to the model of Peak oil - it is something that the establishment media has not really examined - as if oil were seperate from the modern world, and that all can be remedied by Alice in Wonderland credit. I'd also draw attention to the world's food supply - ever more mouths etc, all requiring oil and its derivatives (fertilisers etc) in its transportation and creation. There was that episode during the oil price hike of food shortages in a number of countries.

If I add that we have not been self-sufficient in Britain in food since about late 19th Century (in part due to our big increase in population, and possibly various enclosure acts) may focus that this is something that we in this country are certainly not immune from, indeed, considering our size and population we are in the frontline of all the developed countries.

Better it is not to bury head in the sand? We in Britain have little oil - North Sea peaked about 10 years ago! Preparing the way for other energy alternatives is a positive step for energy doctrine. I'd leave the 'carbon emission nut jobs' to the other mainstream political parties.