UAF Shoots Itself In Foot 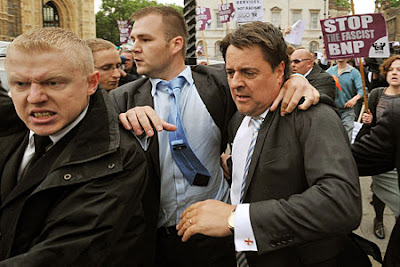 Thanks to the UAF AKA ' New Labour's Taliban ', for the best publicity for the BNP since election night.

Total media domination at the moment - and a great job by the BNP security lads to contain the incident and move Nick to safety. Good work lads and lassies.

This sort of UAF 'street theatre for the masses' merely reveals the violent anti-democratic face of the Far Left, that makes the BNP the victims of red mob violence.

Attacks like the one today are the cancer at the core of the 'Anti-Racist Movement'.

The liberal moderates that pack the ranks of the anti-racist coalition are merely crowd cover for the far left extremists.

The more that the anti-BNP coalition reveals to the British public that they are the same extremists that attack and fire bomb Starbucks and McDonalds on May Day Marches the better - these are not some hippie dippie middle class muppets, these people are the hired Red Thugs of the Corporatocracy.

These are Anarchists, Communists, Maoists and terrorists not 'concerned citizens'.

These terrorists hide behind the mask of moderation, but today we saw their true face - the sneering, snarling face of the ravening mob - brutal, venal and pathetic.

The irony is that the UAF broke up a press conference where Nick would have been interrogated with questions thrown at him by the media, and instead of allowing Nick to speak (where we will, according to the media, merely 'hang ourselves with our own rope') the press conference was ended.

So no hard questions then from the media, but complete media saturation of the childish UAF stunt and images of white middle class students waving silly placards, student idiots shouting out 'stop the BNP' and thugs trying to prevent free speech outside the Houses of Parliament, the birthplace of British democracy.

Note that the UAF have never demonstrated any where EVER in support of ending racial discrimination against White British people such as in the forthcoming Equality Act which passes new laws which further racially target whites even though a survey revealed that over 40 % of white people already felt they were victims of racial discrimination in this country - and these figures are rising year in and year out.

This was revealed in the Channel 4 yougov poll here ;


Brilliant Nick interview on BBC 1 and a great one on Sky News.

UPDATE ************ It now appears that the UAF have managed to hospitalise either innocent members of the public in their attack upon democracy. Either that or they have managed to get themselves run over.

Hopefully it is the latter.

Posted by Defender of Liberty at 07:15

Spot on Lee. People will see the UAF actions are totally unacceptable, and this will win us even more interest and support. Complete domination of the BBC political section at the moment and placement on the BBC news front page... nice one UAF, thanks for that.

Watch this to see who the real fascists are. Rather pathetic when you see them celebrating in their self-loathing mania, when you consider we have 2 MEPs... I think what this is really an expression of is their pent up frustration and rage that we have won, they have lost... like children throwing toys out of their cot.

This is great publicity.

It's time some arrests were made and sueing for damages and defamation.

Tarquin and Tamsin won't have such glittering middleclass jobs to look forward to after getting a criminal record.

They may end up having to actually rough it with the working class and suffer the from the idiocy that they have brought down upon the masses!

It is time to set up a team to monitor their every move and call for arrests to be made if a criminal act is commited, no matter how small.

Ah yes, there's another use of your favourite word, "self-loathing". I think I see what you're getting at here. Very subtle!

Think I have hit a nerve... Anyway, once again, as you seem to have missed it from my previous reply:

Theodor Lessing said... "Ah yes, there's another use of your favourite word, "self-loathing". I think I see what you're getting at here. Very subtle!"


Ah yes, there's another use of self-loathers favourite words "fascist", "Nazi", "racist". I think I see what you're getting at here. Very subtle!

I'm confused. Do you mean they won't be bothering with the humdrum business of representing their constituents now?

Surely you should be saying that the job has only just begun.

It's not going to be all fun and marching about, even with a generous expense account.

I see the fragrant Andraste still hasn't learnt to be gracious in victory....

Arrogance is not generally looked upon favourably in British culture, you know.

Andraste may be no lady, but s/he appears to have the amazing ability to discern commenters' skin colour and nationality from their comments alone!

Against fascism? These idiots are almost a definition of it.
And thanks, Lee, for the update.

Because of the inherent instability of the leftist self-loathing mentality one thing you quickly notice is how they constantly move the goal post. For example, they keep going on about our vote being lower than 2004, er, yes, thats because overall turnout was lower, however, taken in context with the vote we received and the voter turnout our vote was actually up 1.3%, which made us the second is terms of voter support out of the main parties. Therefore it is comepltely disingenuous to suggest that because the number voting was less this reflects less support. That's just one example of leftist deception.

I just listened to a lunatic from UAF justifying violence against Nick Griffin and in the very same breath stating how Nick Griffin advocates violence... the obvious contradiction is lost on these deluded fools. However, I would like to see exactly what evidence there is that Nick Griffin condones violence.

What you see playing out with these demented leftists is their own psychodrama - they project out into the world their own psychosis and then seek to make reality conform to their own internal pathology.

Oh, and as regards the "job done" statement, if any of you braindead tools actually bothered to read and understand the meaning of such statements, which is explicitly clear, you would know that this means in terms of our objectives entering the EU election, we hoped for one MEP, we got two, therefore this was more than we had hoped, therefore "job done"... this is just the beginning we will now set about reclaiming our country back from the EU dictatorship.

You're acting like Griffin is the first politician to ever be pelted with eggs or assaulted.

People haven't boght your rebranding exercise and "New-BNP" is just as hated by many as the overtly racist BNP.

Whenever a Dimblebore or Robinson launches into another tirade against the BNP I suggest you quote this to them....."Our journalists and presenters, including those in news and current affairs, may provide professional judgments but may not express personal opinions on matters of public policy or political or industrial controversy. Our audiences should not be able to tell from BBC programmes or other BBC output the personal views of our journalists and presenters on such matters."'

"People haven't boght your rebranding exercise and "New-BNP" is just as hated by many as the overtly racist BNP."

Idiots and yes self - loathers quality people - not

I'm saying that the BNP was vocally racist not ten years ago.

Many people obviously haven't bought the BNPs rebranding exercise since Griffin became leader. Cause that is what it is. Labour became New Labour as well. (or perhaps liebor?)

The attack on Griffin was an example of people with passionate beliefs taking action. Left or Right there are always people willing to do that. It happened to Peter Manelson recently and John Prescot before that.