The End of the Indigenous French 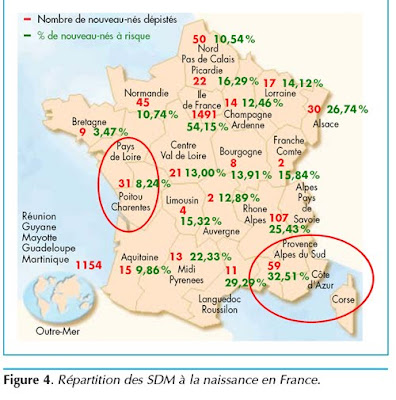 First ethnic statistics ever published in France reveal 54% of babies born in Paris
are Black.


In France, ethnic statistics are forbidden.

But they left a flaw in their system: drepanocytosis is a genetic illness that only affects Blacks.

Today, a map showing the “risk population” for drepanocytosis has been published: thus, the “Black population”.

This is the first time ever that we have such ethnic statistics in France.

And the results are… alarming.

This only counts for BLACKS… Arabs are the other half…

Posted by Defender of Liberty at 02:48

Those figures mate are absolutely alarming.
No more Romantic weekends for couples in Paris,just anti white violence and hatred.

I would be very interested to see the figures for rape and murder in those areas.