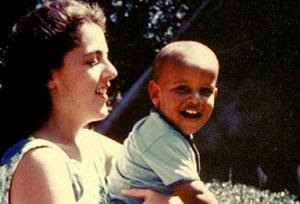 Image - President Obama and his mother. As you will note there is virtually no racial similarity between them, but of course race does not exist - even though Obama's father was black and Obama is, as the Corporate Media keep telling us, the first Black president.


We live in a schizophrenic society where a black woman can say white people do not exist as a racial group ;

but at the same time sociologists can blame whites as a racial group for the black communities social and economic failure ;

Posted by Defender of Liberty at 23:57

More than 98% of the human genome does not encode protein, that is 98% of the human genome, until recently, was classified as junk. Truth is we still dont understand the function or purpose of non coding "junk" DNA. The human genome project predicted the discoverey of 100,000 plus genes and it turned out to be around 30,000 (quite an error). Many noncoding DNA sequences have very important biological functions. Comparative genomics reveals that some regions of noncoding DNA are highly conserved, sometimes on time-scales representing hundreds of millions of years, implying that these noncoding regions are under strong evolutionary pressure and positive selection.

Is it not a bit premature to predict the end of race as a classification when we dont understand what 98% of the genome even does.

Lee as I said last week, point them to the chinese, a succesfull community who had to face as much rascism as anyone.

They have no answer as to why that group succeded, not only in america but everywhere they go, same as white people, why is that?

As i said they have no answer, other than to illogically blame whitey!

Which is racist in itself, the Irony.

Accoding to the Marxists then, Africans are just sunburnt white people.

As I understand it the only valid argument about race not existing is because the so-called "blacks" in fact are many very different races, with Somalians being very different to Bushmen and to Bantu for example. These black ethnicities are so different to one another that the gap between them is as big as the gap between any one of them and even, say, a Nordic White. Meanwhile all White ethnicities are far far more homogenous.

It makes more sense to talk about ethnicities than "black" race or "white" race. I think the idea of the "white race" only became poignant when those who are outside of it started expressing hatred towards "Whites" and forced us to think of "Whites", ourselves, as some kind of block.

But anyway, can we "learn to act Black?" and why would that, according to the author of this book, be a bad thing? Surely the premise that it is ideal to "act White" is an odd thing for an anti-racist to propose?!

Perhaps someone should write a book with the title below.

“There is no such thing as the white race – A response.”

"Dissonance can also lead to confirmation bias, the denial of disconfirming evidence, and other ego defense mechanisms."

The Nothing is attempting to destroy "Fantastica" or Fantasia..

Its the Never Ending Story all over again...

The Nothing wails in pain and whines "pouisecushun", Ya hoitin' me, Ya hoitin me, whenever its work is threatened..

The Nothing is a malevolent predator that feeds on innocence.

Propoganda is so deep and sooo wicked ,that most people could never except whe reality of it.

Almost every TV progamme I watch, including blockbuster films, to soaps ,is riddled with anti white race brianwashing propoganda to a point that even I have a difficult job rejecting the indoctrine that I have been subject to most of my life.
Imagine how hard it is to explain to the average white british man whome havent a clue whats going on.
Even last night, I stated watching a film half way through, I noticed that a bunch of whites were tourchering a black man and women.Then it showed how they were haunted by ghosts for the rest of their lives and how it drove them mad; unfuckingbeleivable.

4 or 5 years ago I wouldnt have even seen what they are doing, but now I reckognise it on every channel, even on the kids cartoons.

It turnes my stomach, that whity is the only Racist, the black is always the victim.

Their shit wount last forever ,there are lots of angry puppies out there.

I have spoke of the university's a long time ago , how there is a specific link to moronism, I also noticed that what is the easiest degree to acheive"sociology! is the first way to communist brainwashing.