The Jews and Zimbabwe 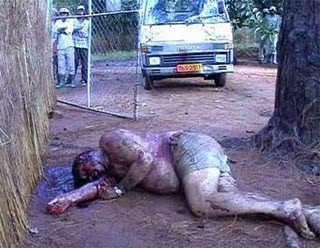 Just watching Mugabe and the White African and the thought appeared - why arent the Jews of Britain and the world using their vast political, media, economic and social powers to demand an end to the ethnic cleansing of Whites from Zimbabwe, especially as many of those whites were and are veterans of the Second World War who fought against Nazism and liberated the Jews from Hitler.

The next time some Jewish group in the UK peddles propaganda calling the British racists, I will demand an answer why they havent said a single word as a community to defend the White Zimbabweans.

The silence of the Jewish communities around the world to support the people of Zimbabwe, black and white, from Mugabe and his ethnic cleansing of whites is evidence that the Holocaust is being used as a means for personal gain not as a way to prevent future Holocausts or ongoing ethnic cleansing.

If the Holocaust was being used as a moral lesson for humanity - then why is it the Jews only ever talk about the Holocaust in relation to the suffering of the Jewish community under Nazism ?

If the Holocaust is held out to the world as a moral lesson for all humanity, then why are the Jews silent on the issue of Zimbabwe.

Jewish children should be forced to watch this documentary and take a trip to visit the burnt out farms of the white victims of Mugabe, as well as gentile children being taken to Auschwitz.

Why arent the UAF outside the Zimbabwe Embassy demanding an end to anti-white racism in Zimbabwe ?

Because they are all a bunch of hypocritices who support all forms of racism and ethnic cleansing against whites, thats why.

Was the liberation struggle of blacks fought in order to create a Black Fascist state based on anti-white racism ?

It appears that the bollocks and propaganda we see all the time about South Africa and Apartheid and Nelson Mandela in the Corporate Media is all bullshit and propaganda designed to blind the public about the Black Nazi states that have grown up in Africa since the end of apartheid.


By your silence are you condemned.

Posted by Defender of Liberty at 14:41

They are yet to produce on for Zionism, oh, I sleep so much better after seeing this :O)

You just dont get in Lee. The Matrix determines what is right and what is wrong, what is evil and what is good. Deviate from the accepted line and they will come down on you like a ton of bricks. As for white Rhodesians well there wont be any soon so why bother.
Anyway there is the world cup coming up so get out your little England flag like a good citizen and dont ask too many questions ok!

I felt physically sick at the injustice and hypocritical media and politicians, this is so sad!

Where is Peter Hain now?

Where is Yasmin alibaba?

Of course the agenda is to make everyone a marxist slave for the elites, with vicious racism at the center of it all, and being a global system this time their will be no liberators.

and the UAF, il-Liberal fascist drones don't have a clue.

Lee you have to get this stuff on the main site, this cannot go on unoticed.

This is but a taste of the future in store if we don't learn the lessons.

I am serios get this on the main site, stop the glib soundbites, get the truth out their before it is too late.

Isn't it called Denise GARSIDE? And isn't it a lesbian?

The most striking thing about this documentary was the inability/unwillingness of the white farmers to use physical force to protect themselves and their families. Im sure it is a very complex issue and probably what Mugabe wants, but when those attempting to kill you, rape your wife and daughters and steal your home and land are living behind security gates with armed guards it might be wise to armour up also.

How many millions/billions of pounds in foreign aid has Britain pissed in Zimbabwe's direction over the last few years?
Our taxes are paying for this.

Britain currently provides £40m a year largely through the UN but in 2008 Milliband was drawing up a package of £1billion a year, indefinately. thats a lot of German cars.

I am Jewish and from Argentina; am I going to use your stupid text to promote the Malvinas X Falklands imbecile war??? Get real, Jews are normal working class like any other people , don't dump your frustration on us!!!