Muslims and The Prison Service 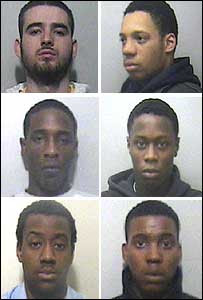 Do the British people remember how she was kidnapped, beaten, raped and stabbed and her friend shot in the head by these animals above.

NAH, OF COURSE THEY DONT.

They all remember Stephen Lawrence though dont they.

The majority of the British public are media conditioned morons.


The eight-week trial heard how Mary-Ann and her friend were abducted in Reading during the early hours of 7 May, 2005.

The teenagers were bundled into a car boot and driven to a tiny room at the Abbey House Hotel in the city.

The girls were drugged, raped and tortured with cigarettes, knives, a metal bar and boiling water for three hours before being driven to Prospect Park to be executed in a revenge killing for an earlier gang attack on Adrian Thomas.

One prosecution lawyer likened their torture to the "horror of war crimes".

I have held off having a pop at the prison service - but I will now have another go.

Why are Muslims in British prisons treated with kid gloves.

These are criminal filth - the one who attacked Radislav Krstic was the convicted murderer of a young white British girl.

He should have been hung when he was convicted, not thrown into prison where the bosses of the Prison Service treat criminals like they are on holiday just because they are black or muslims or members of an ethnic minority.

The prison service if a joke, run by politically correct morons.

Brutal revenge: In a high-security British jail, a Serbian warlord has his throat slashed by three Muslim inmates

A former Serb general convicted of Europe's worst massacre since the Second World War had his neck slashed open by three Muslim prisoners in a British jail yesterday.

Radislav Krstic, 62, serving a 35-year sentence for war crimes, was in a critical condition in hospital after the attack at top security Wakefield Prison.

The Serbs were the deadly enemies of Bosnian Muslims during the Yugoslav civil war in the 1990s. At least one of Krstic's attackers is said to be a Bosnian Muslim.

The incident is a huge embarrassment to prison bosses because Krstic is regarded as one of Britain's most sensitive and high-profile inmates.

It is almost certain to be raised at diplomatic level and questions will be asked about how the suspects were able to attack him.

He was convicted for his part in the massacre of more than 8,000 Bosnian Muslim men and boys who had been rounded up in the UN's supposedly safe haven of Srebrenica in July 1995.

At the time he was one of the most powerful men in the Bosnian Serb army, second only to General Ratko Mladic, who is still on the run from war crimes investigators.

He was arrested in a daring joint SAS and U.S. Navy SEAL snatch in Bosnia in December 1998.

In 2001 he became the first man to be convicted of genocide by the War Crimes Tribunal in the Hague and was sentenced to 46 years in prison.

This was overturned on appeal and replaced by a 35-year sentence for aiding and abetting genocide.
masscacre.jpg

Under the 1948 Convention on the Prevention and Punishment of the Crime of Genocide, Britain is obliged to take a share of prisoners convicted at the tribunal.

Among Bosnian Muslims, Krstic, who is married with a daughter, remains a figure of hatred, with the families of many of his victims swearing revenge.

Retribution appears to have come when he was attacked in the maximum security area of Wakefield while in his cell - D320.

He was slashed using a homemade weapon - believed to be a razorblade embedded in a toothbrush.

Last night it emerged that one of his suspected assailants was serving life for the torture and murder of a girl in a suburban park in 2005.

He is Indrit Krasniqi, 22, of Chiswick, West London, convicted in 2006 of the gang murder of Mary-Ann Leneghan, 16, in Reading.

Krstic was found by prison officers on the floor in a pool of blood at 11am. One of the cuts narrowly missed a major artery. He had also been beaten around the head and body.

He was unconscious when he was taken to nearby Pinderfields Hospital. An insider said: 'At first it was thought that Krstic was dead because of all of the blood.

'It was a well-planned and executed ambush. The view is that it was an act of revenge.'

Last night Krstic, although critically ill, was not said to be in a life-threatening condition.

The jail was in 'lockdown' as staff searched for the weapon used in the assault.

The attack comes at a time when former Bosnian Serb leader Radovan Karadzic is standing trial at the Hague charged with war crimes relating to Srebrenica and other atrocities.

Outraged officials in the city of Banja Luka, the centre of Bosnian Serb power, said last night that the 'whole position' of the War Crimes Tribunal would be further undermined if those convicted 'couldn't even by protected in a prison'.

'We should know whether this was allowed to happen... whether a blind eye was turned,' one said.

Posted by Defender of Liberty at 23:50

Lee, off topic but back to the elections.

as the austerity measure and Eco taxes are commining our way with all the main partoes backing it as well as the EU infringing on us more each day.

It will be our time to out the NWO and to be the party of liberty, not libertarian bollocks but liberty, freedoms that we used to enjoy.

People are not ready just yet but they will be, and when the shit hits the fan they will be looking to the people that said what would happen all along to give them guidance.

Nick has made some smart moves on the NWO theme and the bilderbergers and he should keep on this route, some may scoff right now, but our time is comming and the mainstreme will be loathed, so we need to be ahead of the game, which includes UKIP.

We have to predict where things are headed and warn people and other the solutions, for a short while some people may scratch their heads, long term people will be looking for you to save them!

It's a terrible info((( I even don't mean the killing itself, I mean human cruelty...Where does it come from? Torturing and killing the girl for sake of some revenge...What kind of crime has she done to die in such an awful way...