The Face of Multi-Culturalism in America 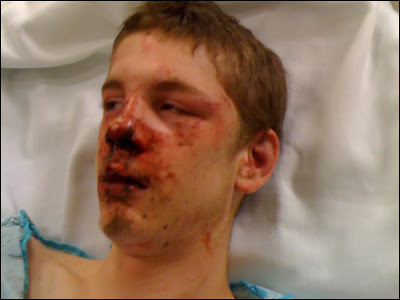 SEATTLE - A 15-year-old boy from West Seattle says he was held hostage and beaten for hours, all because of the color of his skin.

Shane McClellan says two men kicked and whipped him at gunpoint - and told him they singled him out because he is white.

"I didn't know if he was alive or dead," Tim McClellan said.

The incident happened as Shane McClellan was walking home from a friend's house Tuesday around 2 a.m.

Shane's father says two men called to Shane from the top of a staircase near the intersection of 14th Avenue SW and SW Holden Street. The men asked for a light, and when Shane walked over to oblige, they knocked him to the ground and started kicking him.

"Apparently one guy got behind him and grabbed him, and the other guy started punching him in the face," says Joseph Cannis, a friend of McClellan.

The two men knocked the frightened teen around on the staircase, making racially charged remarks.

"So after they beat him up over here, they started dragging him over and talking stuff, 'We're going to beat you up.' Not letting him go. 'We're going to have some fun with you,'" says another of McClellan's friends, Michael Jackson.

The attackers stripped off McClellan's belt and started whipping his back. One of the men held a gun against the back of his head and burned his neck with cigarettes.

At one point they shoved McClellan's face into a hole with the gun against his head. They also urinated on him and poured beer over him.

Shane told police the suspects said they were whipping and beating him because he is white - and that his ancestors had done the same in the past.

"What he told me, when they were beating him with the belt, they were saying, 'I don't like white people,'" says Tim McClellan.

The suspects told Shane they were Bloods gang members and were beating him because he was white.

The boy told police that one of his attackers appeared to be black and the other Asian or Pacific Islander.

The victim's father says this was nothing short of hours of torture.

"Put a gun to the back of his head and told him if he said anything they were going to blow his head off while they sat there and burned him with cigarettes on the back of the neck," he says.

The two assailants held the victim on the ground for some time, and Shane eventually passed out.

When he regained consciousness, the attackers were gone. They had taken his money, a coat and an MP3 player.

Shane waved down a passing car for help and met his family at the hospital.

Seattle police have referred the case to their Bias Crimes Unit for review as a possible hate crime.

Detectives told the family they are working on a photo montage of possible suspects - and will see if the victim is able to identify his attackers from the line-up.

Shane is now out of the hospital and recovering at home.

Posted by Defender of Liberty at 09:18

curfew time for our own safety, you can see it coming.

Fucking digusting, it it were the other way around as we know only to well from first hand expierence it would be World media within minutes that whitey done it..

Remarkable photo, look's just like my 13 year old son looked a few weeks ago when he was attacked by a Muslim.

I dont know if your aware of it but 650 mp's are now having their security upgraded because of Islamist's have eventually woke up and started to target them :O) :O)

The face of the results of multi culti that Lee now embraces, Ironic isn't it?

I recall our Kriss Donald

It is Liberal Multi-culuturalism and its fostering of race hate against whites, its peddling of racial grievances, its affirmative action plans, its abuse of nationalism etc that has caused the rise in race attacks.

My model would cure that.

just tried to put this on DIGG

An unknown fatal exception has occurred
Whoa! Something blew up. If you think you reached this error in error please do not hesitate to contact support.

Why are the Muslims targeting Liebour MP's? Is it something to do with the Respect party?
Can you imagine the hatred of these people to the retards of UAF?