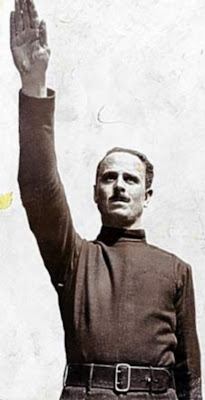 It may come as a shock to many people, but the most powerful Nazi political party ever set up in Britain, the British Union of Fascists, was a Tory group.

Sir Oswald Mosley was a Tory MP, and also a Labour MP.

The leadership of the BUF came from the ranks of both the Labour Party and the Tory Party.

The primary backer of the BUF was Lord Rothermere whose grandson, Viscount Rothermere, still owns the Daily Mail.

It was the Tory Press that supported the BUF and Oswald Mosley and the British fascist movement before the war.

The financial backers of the BUF were Tories and also members of the aristocracy.

The BUF were a Tory front group, rather like Nothing British About the BNP.

It was the Tories who supported and nurtured fascism in the United Kingdom before and after the war.

Ex member of the 70's National Front Stephen Metcalfe is now MP for Basildon and Thurrock.
His family have had links to the Tory party for a number of generations and a number of ex members of Mosley's Blackshirts living in his home town of Loughton, Essex say that his family had connections with Mosley (allegerdly).
He will denie this off course but who would you rather believe? A Tory politician or an ex blackshirt? I know who i would believe.
Of course there is not much you can do about what your grandfather got up to, but you can imagine what would happen if a member of the BNP was in the same position.
There is nothng wrong with being a member of the National Front when a teenager of course, but again didn't members of the Tory party at the time call us patriots some terrible names and had careers of Nat Front members ruined.
Perhaps someone with abit of time and expertise could study Stephen's families links to Mosley(allegerdly).

"hear no evil, see no evil speak no evil"
This will be the reaction from the British public over this thanks to the NWO press.

fascism, communism, islamism, zionism, Imperialism, capitalism, all of these are merely idealogical tools for totalitarianism and a way of governance for the NWO to create a one world government.

Hitler tried it, Stalin tried it, The British tried it along with the French Spanish etc and Mohammed implemented ways of world order and world governance, now we have the same in power trying this today.

No Change there then now they are just Liberal PC Fascists

Why does the BNP seem to specialise in own goals? the photo of Steve Batkin next to some unsavoury low IQ morons doing a fascist salute. I wonder how the photo was found and how much was paid for it incidentally. When you get a constant supply of such things no wonder anyone with intelligence and leadership potential runs a mile from the BNP.
I sometimes wonder if the whole BNP isnt a state run honeytrap used to discredit genuine nationalism.

National Socialists do not agree with fascism.

The far Left is especially keen that the term "socialism" should belong to them, and not to the ideas of the Third Reich, so they perpetuate the term "fascism" to describe National Socialism.

Mussolini’s Doctrine on Fascism:
“Therefore, for the Fascist, everything is in the State, and nothing human or spiritual exists, much less has value,-outside the State. In this sense Fascism is totalitarian, and the Fascist State, the synthesis and unity of all values, interprets, develops and gives strength to the whole life of the people.” From paragraph 7.

What kind of idiot could seriously think Hitler would be into "one world" unless it would be a world only of white Germanics!

or more likely state run agents have infiltrated the BNP to discredit them from within. or a likelihood neo fascists believe that nationalism means fascism.
but seeing as though the NF and other fascist out fits are heavily infiltrated by MI5 etc I tend to err on the case that state sponsored agents are spreading disinformation, and acts which appear unsavory to the general public.

Of course though, you do have paid informants, paid to lie to pay off mortgages etc.

The BNP needs to implement a contract of responsibility with all potential members and current members, anyone acting in an unsavory fashion could be prosecuted if they bring the BNP into disrepute.
Same contracts could be issued to all immigrants coming into the UK, you commit a crime then goodbye to you and your entire family.

The same Hitler who allowed Black Africans into the wehrmact army, had an SS Muslim division of 2 million, the same Hitler who praised Islam stating that he preferred it over Christianity and regretted that it had not been the religion of the Nazis.

Hitler believed in a One World Government with the Master race of Aryans at the lead.

It's an ignorant historical belief that Hitler wanted to wipe out every non Germanic race on Earth.