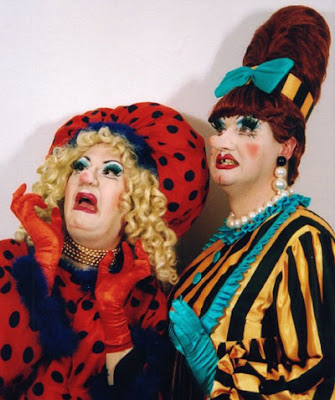 Image - Clegg and Cameron. The two posh boys in their joke government, the ugly sisters of democracy.

Clegg and Cameron, the two ugly sisters, are about to start the political pantomime that will be the government.

It was obvious the posh boys clegg and cameron would work together.

It is a pathetic joke.

There will be an election within a year, Cameron will be deposed by the real Tories in the Fop Tory Party and the people will finally reject the Conservatives and Lib Dems - leaving, as Chomsky says in the article below, only the BNP as the only party to save the country.

If the Fop Party signs a deal with the Lib Dems then that is the end of the Tory Party, and will lead to the BNP being the only party of the right.

The influx of tories into UKIP will ensure the people regard the UKIP party as a joke group filled with despised ex-thatcherites and tories.

Every way the BNP wins if Clegg and Cameron form a joke government.

Lee can I recommend to activists a piece of DVD authoring software called dvdstyler.
It's free ( donations welcome ), I've no association but been working with it for a week and I have to say, it's excellent.

There is a lot of good video info out there the General public are never going to see.
It's up to activists and bloggers to put that right.

I think the website is dvdstyler.org or just search for it on the web.

I will check it out,

thanks for the tip,

The only winners out of this pantomime show will of course be the BNP, We will be in power a lot faster than our opponents think !