BET TIME = How many UAF scum nicked at RWB 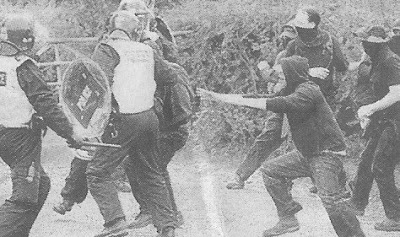 Yes folks its that time of the year again - the RWB is here and the usual UAF nazis will gather to try and deny people their democratic rights.

Unfortunately I will not be attending as at the moment I am suffering from Swine Flu and therefore am sniffing and coughing a lot.

So come on folks - lets lay our bets.


1) HOW MANY UAF SCUM WILL BE ARRESTED THIS YEAR ?

2) HOW MANY WILL BE PROSECUTED ?

3) HOW MUCH WILL THE DEMONSTRATION COST THE POLICE ?

4) HOW MUCH DAMAGE WILL THEY CAUSE ?

5) HOW MANY MEMBERS OF THE PUBLIC WILL BE ATTACKED ?


The winner with the right number will get their picture posted on this site if they wish with a big note saying you are a brainy person.

Lets look at the form.

Last year there were 36 arrests at the RWB and none prosecuted.

I reckon that this year, as the numbers will be swollen with various scum bussed in by trade unions, Islamists, the Socailist Workers Party, the Respect Party and various extremists such as AFA, there will be more arrests.

Last year they stole peoples property from their gardens to use as missiles to throw at the police and also attacked the police.

4) Massive damage to property on the way to the demo

BUT we will never know because the Guardian will report
1) 2 (but unrelated to the main demo)
2) None
3) £.5 million and it is all the BNP's fault that council tax has to go up
4) One garden gnome which somebody inadvertently tripped over
5) None from UAF etc (but 6 skinhead BNP supporters who verbally abused the elderly.)

Good blog.Only just stumbled on this one through Digg. Apparently smackheads from the UAF claim they have put hypodermic syringes all over the land in Derbyshire and they certainly left a load around the land owner's home. Bunch of soap dodging, smack taking, deluded, traitorous, communist dickheads. I don't like them. And they beat a white lad unconscious and robbed his body in Birmingham at the weekend. Apparently he was a robbery victim and when the crowd saw him being attacked they assumed he was the target of their hatred. He was not even part of the anti Islamic extremist demo.