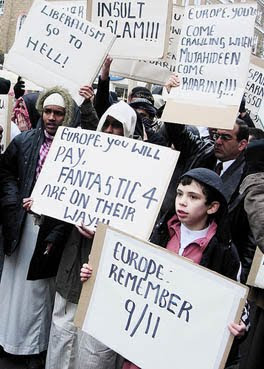 Images - compare and contrast. A young Asian muslim boy at a demonstration in London holding placard gloating over the 911 attacks. An image of young White female child at BNP RWB festival burning golliwog. The former boy child must be understood, sympathised with and nurtured, whilst the white girl child must dehumanised, abused and vilified. The former gloats over mass murder. The latter burns a golliwog.


Where does love and hate come from ?

Are we all born with a fixed quotent of hatred and love in our souls that we then distribute throughout our lives, or are love and hatred simply manifested within us by the circumstances of our lives ?

I believe the latter is the answer.

I believe that whilst we all have the same emotional capacity to hate and love as much as each other, it is the circumstances of our lives that produce those emotions within us.

Take for example young Muslim terrorists and extremists in the West.

We are told that Muslim extremism in the West always has a cause - Israel, Islamaphobia, racism etc etc

But whenever a white person gets involved in radicalism then they are simply racists.

Whilst the former are born good and are turned into terrorists (according to the liberals) the latter are born evil and are born racists.

Here for all to see is the racist double standard, illogical inconsistency and hypocrisy at the heart of the liberal stance on racism.

Whilst racism always has cause, only whites are never listened too.

Whenever a young British Muslim is involved in an act of terrorism anywhere in the world we are told by the media, the politicians, the liberals and the leftists that we must understand them, that we must try and discover what drove these good people into doing bad things, we must search for what is that radicalises them, we must root out the causes of terrorism, we must empathise and sympathise with them so as to reflect the fact that something created that hate within them.

At every level of these issues and events the liberals and media say ' we must engage with these people and seek to understand what instigated and motivated their hatred '.

But never when they are white.

When young white people exhibit hateful or extremist behaviour, then they must simply be demonised and dehumanised.

They must be classified in that most modern of catergories as ' A Racist' and regarded as a sub-human, whose innate humanity is removed and denied.

They must be stripped of all their humanity, transformed into abstractions and propagandised to the masses as the epitome of evil.

This is what our politicians, our media and our own people do to our people.

Even worse than this, they dehumanise white people they regard as 'racists' to such a level that death threats, physical violence and politically motivated acts of racial discrimination against them become accepted in our society, lauded even.

White people in Britain are the majority victims of race attacks each year in our country.

At the same time gangs of non-whites seek out whites to commit crimes against them, so that whites are the victims in the majority of crimes involving different ethnic groups.

In every city and every town day after day whites are killed, raped, attacked and abused simply because they are white.

Yet this is never reported in a way that truly reflects what is happening, for in order to ensure 'good community relations' the government, media and police all conspire to hide the truth from the masses.

The fact that whites are the main victims of racism in the UK, is never reported in a way that reveals that fact - each attack is just a small story that is forgotten the next day. This contrasts with the incredibly rare real race attacks on ethnic minorities which are blown up into huge media stories that lead to massive public inquiries, they are subject too massive police investigations with vast budgets, detectives are pulled off inquiries into the murders of whites to form huge teams to investigate 'racist' murders against ethnic minorities, community centres are renamed and non-white charities set up to benefit non-whites and discriminate against poor whites.

When a white victim of racism dies the truth is hidden.

Only rarely does a case gain the level of attention of the Kriss Donald murder, but there has never been a public inquiry into the racist murder of white person unlike those for Zahid Mubarek and Stephen Lawrence.

There has been no Kriss Donald Inquiry = why not ?

The problem for the media, the government and the police though is that every day more and more white victims of the multi-cultural system are created.

Every day more and more white people are having the scales torn from their eyes as their lives come to reflect the hidden reality of our society.

They, their husbands and wives and their kids are stabbed, robbed, raped and beaten by non-whites, and when they see that way the system conspires to minimise their pain and hide their suffering - and they come to hate and mistrust the system.

The Ivory Tower dwellers of our society - the liberals, leftists and middle class white flighters and urban enclave dwellers - will one day experience their own awakening too.

When a young white girl burns a golliwog in a bonfire the media and liberals howl with indignation, but when a young British Muslim blows up a tube train and kills dozens of people we are told we must 'understand what drove them to become an extremist' and that we must' engage with these people to cut away the roots of radicalism'.

White victims are dehumanised and called 'racists' in order to shut them up.

Muslim criminals and terrorists are told to speak up, for they will be listened too and empathised with and offered millions in tax payers money to stop them from becoming more radicalised.

Their pain and suffering is ignored, minimised and hidden in the name of political correctness and ensuring good race relations - when all this sick double standard is doing is driving more and more white people into radicalism.

When a young white girl burns a golliwog the liberals never ask 'why ?'

They dont need to ask why as they already know the answer, and its because she is a 'racist'.

She was born white, therefore she was born a racist - and only those whites who spend their entire lives repudiating and attacking their whiteness, or who breed with non-whites, can be non-racists.

Whites are born racists and therefore they must be dehumanised in order to prepare society for its next step - which is not stand in the way of a state sanctioned and controlled series of programmes of systematic genocide.

The liberals never think to themselves of the double standard operating in their minds at that moment, for the very same people who say we should not demonise muslims, we should talk to muslims to understand why they are so full of hate and that we should work with them to undermine islamic radicalism are the same ones saying ' this white child is not a human being, she is just a racist'.

This language of the 'sub-humans' is the same language that Trevor Phillips has used to call members of the BNP.

Phillips likes to attack the BNP as he can racially abuse whites and white society by hiding that attack under the guise of attacking the BNP.

Whilst the BNP are accused Trveor Phillips of attacking asians when we talk about Islam, as most Muslims are Asians, Trevor Phillips and his liberal fellow travellers are doing the same when they attack the BNP. They are in reality racially attacking whites but hide that attack by using the BNP as the pretext of their attack, because they know that members of the BNP are white.

When we attack Islam we are called racists as most Muslims in the UK are asians, but when Trevor Phillips attacks the BNP he is not called a racist even though he knows the members of the BNP are white.

Yet again a double standard operates.

Multi-culturalism is a racist police state built with lies, and every day more and people are being attacked, raped, beaten and abused and are waking up.

One day the 'phoney peace' will break down and the civil war will break out.

The media, government and police and all the power of the Surveillance State will not be able to prevent its downfall, as muti-culturalism is a machine that can only work as long as whites remain silent whilst they are murdered, impoverished and made into powerless slaves.

And the tragedy will be that it will be the lies, double standard and racism of the multi-cultural system itself that will start that civil war.

Our role in the BNP is to educate the victims of Multi-culturalism that hate is not the answer.

They must learn to love both themselves and their own people.

Hate is not a productive emotion, and the system wants us to be mindless haters.

The last thing the system wants us is to direct our time, minds and energies organising, community building and social networking.

It wants us to be haters, as hatres are incapable of rational thought.

Our victory will come when we stop hating and start thinking.

Our role is to re-educate the haters of our people to become useful parts of our national liberation movement, and get them educated, trained and deployed to build the massive national resistance movement we need to take power.

Those that succumb to hate merely empower the system.

Posted by Defender of Liberty at 04:32

I take it many of my friends read the Sunday papers? Well I hope you did not believe in the LIES spued out by the News Of The World report about our Red, White & Blue?

"Well he had photographic evidence" I hear you say ?

Well please let me explain these photographs for you....
http://1kewldude2.blogspot.com/2009/08/undercover-news-of-world-reporter.html

I couldn't have put it better myself Mr Barnes.

They won't be happy until the white race collectively hangs themselves with this perceived guilt.

I would say I enjoy your writings but I usually end up fuming.

and 80 percent of the crime in a place like Wycombe is committed by Asians, Muslims, Afro-Caribbeans, Africans

Multi-culturalism is a racist police state built with lies,

Fewer reports of such seem to be emerging than was the case a couple of years back.

this doesnt look like a child to me, is this a set up, wouldn't surprise me.

I wouldn't bash either child since they are both products of their parents. Why are people more afraid of white racists than terrorists? Look at it this way: many nonblacks fear black males due to the amount of crime they commit. I'm not going to argue whether or not that is right or wrong. On the other hand, historical record shows that white males have killed people by the thousands and even millions at a time. Also consider apartheid, American slavery, Jim Crow, etc. Whites have inflicted so much pain and misery on others. While I do NOT believe that nonwhites are innocent victims in this world, I can't deny that there is a good reason to fear white racists over others.

How come neither the golliwog-bearing child nor the roman saluter have blue rwb wristbands on? Could it be that these photos WEREN'T taken on the campsite?

This photo is fake. Could have been taken anywhere. A crude fake.