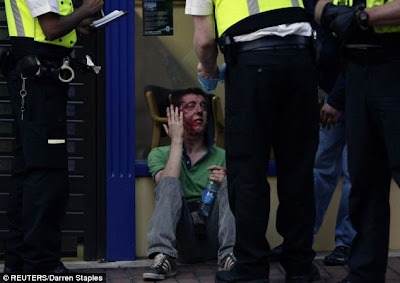 Image - the true face of the UAF and their right of free speech and protest - a badly beaten lone white lad and the burnt remnants of the Union Jack in British streets.

Whilst British troops of all races are dying in Iraq and Afghanistan the UAF and its 'Paki4lyf' bootboys attack British patriots and lone white kids on British streets.

The UAF are the inner enemy.

The UAF are traitors to our nation who deserve only one thing, a short rope and a long drop.

This was the headline of the Daily Mail this morning on an article about the Birmingham riots ;

After I rang them and informed them that I was going to initiate formal legal action with the PCC as the headline was false as the BNP had nothing to do with the demonstrations the headline was changed within two minutes by the web team of the Daily Mail too ;


It just goes to show you how much bullshit the Daily Mail comes out with and how easy it is to get them to change their bullshit when they are challenged.

Posted by Defender of Liberty at 02:51

The Mail was guilty of lies!

Read this remark from a muslim site MPACUK.


Its going to be pretty intense so be prepared to defend your religion when the time comes, and let friends and family know. Please forward to all.
Lets kill and maim the *******s who want to destroy us. Make sure your there, and dont come empty handed (preferably a sharp or hard object).'

This was read out this morning by Nick Ferrari on LBC Radio.
I Added which he also read out,
We out here deal with the real muslims not the ones the media deal with.

Some Marxist female was branding the BNP akin to terrorist's
I'm furious!

Its on!!!
This guy also said July the 4th there was a BNP demo in Brom, clear rubbish as you can see by going to You Tube it was IDL, it was not a violent demo at all.

gates, did you also read the comment where one of the poster on that muslim forum stated that if "the poster who wrote the above" wanted violence then he should go to Helmand. Helmand is where our boys are still in conflict with islamic militias.