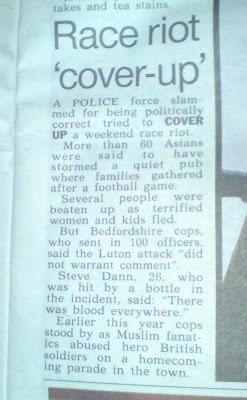 When the police hide the fact that a race riot occured in a British city, then you know that our society is in danger not just from the Islamist thugs but also political correctness.

Above is a picture of a story in The Sun newspaper from a few days ago.

This story reveals just how much of a fascist state we live in because of political correctness.

In order to try and keep a lid on the deteriorating social situation, the police now hide the facts of a race riot and try and put pressure on the media not to reveal that they are going on.

This has been going on for a long time.

That the media would wish to hide such information from the public can be confirmed in a report produced by the Department of Communities and Local Government called ‘ Guidance for Local Authorities on community cohesion planning and tension monitoring’ which was passed to the Private Eye magazine in October 2008 which reveals that Tory, Lib Dem and Labour Councils work with local newspapers to censor news stories about immigrant criminality in order to defuse ‘community tensions’.

According to the document, “Berwick-Upon-Tweed’s crime and disorder reduction partnership is working with the local press/media to vet stories involving migrant workers employed in the food processing and agricultural sectors to avoid stigmatisation.”

“For example,” the document says, “in response to Kick Racism out of Football campaign, an extremist political group wanted to picket a football stadium. A local newspaper was going to run the story on its front page — an action that is likely to bring unwanted publicity to the picket and fuel rising community tensions. The intervention of the Community Cohesion Partnership prevented  the story from being run, and in the event, no one turned our for the picket.”

It appears that local councils all over the country are working with the local media, the police and other public bodies to hide information from the public that they consider may inflame community tensions, or that may cause people to vote for the British National Party.

There are other stories which have been hidden no doubt through the use of D Notices on the media preventing them from reporting the realito of what is going on in nthis country.

Therefore we now live in a politically correct fascist police state.
Posted by Defender of Liberty at 01:17

This is just going to be the tip of the iceberg for events that are and will surely be unfolding regularly in Britain Lee.

Also this is a very dangerous game that our political masters are playing. I dont know about you but reading articles and incidents which we know go on raises my blood pressure slightly more.

Are there any Police officers left any more that have got a conscience as to what part they are playing in the destruction of this country for that fat piece of shite Gordon Brown.

My patience is fast running out, I wonder if the rest of the country feels the same way...I doubt it, they are too busy watching X Factor.

I have suspected for a long time that a cover up was in progress.
I start the day with radio 4s today programme then at 7am turn to LBC London radio.
Each day it's someone killed either shot or stabbed to death. yet local news never mentions a thing.
I find changing stations does help but this shouldn't be.

This strategy seems to be whats' going on and has been since the 60s.
When i came across it a penny dropped.

Fabian Fascism seems acceptable in Britain by those in the know.

the sinister world we now live in where everything from official channels is a lie has now become so predictable that those with their eyes wide open do not even consider anything connected with the goverment to be anything butcorrupt lying propaganda.

It no longer shocks, however that is preaching to the converted and we need people like the BNP and Lee to highlight these issues to the disbelieving masses on how they are being duped.

I mean who would have thougth that America and our goverment would send people with public knoweledge to toture camps in the last decade, they get away with it through a broadly complicit media.

The media is meant to reflect public outrage but never does, it has become the propaganda arm of the elite.

If the goverment built gas chambers and started a murderous genicide in this country the media would be complicit.

Instead it would focus on big brother TV outrage or some footballers wife, so little hope have our working class girls that they feed them quick fix lifestyles, win the lottery, marry a footballer, get your tits out and make millions, anything that takes their mind of the failed education system and the real inequality all around them.

That is how bad things have become.

Keep em comming Lee, many people will read such things for the first time and start to question the percieved `reality` fed them on a daily basis, for i too was once ignorant, would even argue the case against what I know to be pure lies and propaganda on closer inspection.

O/T but you may find this interesting.

Only question is, knowing what we do about the Sun's reporting in the past, can we be sure this is all true. I'd check the facts independently first before publishing this wider.

Off topic but this is major breaking news

Hal Turner was on trial for spreading violent anti US government propaganda....he was also FBI trained to act as an "agent provacteur".

Read it and weep.

Hi Lee - lost your email address. I just posted this on a forum after reading an amazing article linked below. Research this for a mind blowing experience: the key to the universe mate:

A Well Kept Secret - Harmonic Science
I have long been fascinated by the idea that everything is vibration, as everything (even innate objects such as rocks) have energy and perhaps this is one of the reasons I came to Odinism - a natural religion where the gods are seen in nature and as energy and so forth.

Below is a link to an article of immense significance.

Ever wondered why the church banned the tri-tone interval of a half octave (Diabolus in Musica)? For the musical layman, think of Jimmi Hendrix playing the intro to Purple Haze.

In Freemasonry, symbols revolving around geometric-harmonics are widely displayed. Why? Find out below... because as Odinists we are in tune with this. Think 'runic-vibration'...