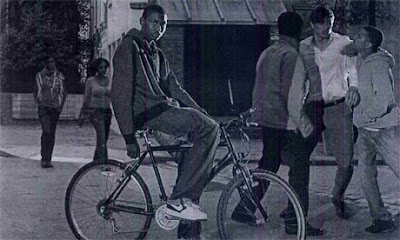 Image - This image must not be seen, as some prick in the ASA has decided that the truth is now too subversive to be shown in our own country.


Yet another definition of racism crawls out of the woodwork, this one in relation to imagery used in advertising.

The ASA, a bunch of ASS's who are nothing more than up a jumped up pitifully pathetically correct New Labour Quango, have unilaterally decided to tell us what we can see and read in our own country and have also issued a new definition of that hydra with a thousand heads of 'Racism' which now includes ' reinforcing negative sterotypes' - even though those images may be true.

Yes, the truth, if its reinforces a negative stereotype, is racist.

Therefore the truth must be hidden and the ASA ban it.

This is how sick our society is.

A campaign which showed images of a WHITE victim of crime being attacked by Blacks cannot be shown as, even if the image reflects the reality in our society, if that image reinforces a social perception that Blacks are involved in crimes where Whites are victims, then that image must be banned as being racist.

This is insanity - in effect the truth must be hidden if it reinforces negative ideas about the Black community, even if the intent was to help the Black Community.

Note that no-one asked ' will this advert help white kids who are the victims of black crime going to the police as they feel their pain and suffering is being shown for the first time in our society as political correctness has prohibited debate on white vitims of black or ethnic crime ' - they just said that as the image reinforced the idea that blacks are muggers, then this advert must be banned.

WHO THE HELL ARE THESE SCUM !

The ONLY restrictions on our right of free speech are defined in the European Convention of Human Rights, and that states that ideas and images which distrubm shock and offend society are protected under free speech rights.

The only other people who have a right to say we cannot see an image are the police -under legisltation prohibiting that imagery eg child pornography.

The ASA is a jumped up politically correct joke of a QUANGO, and the charity involved in this pathetic case wont appeal the findings of the overpaid idiots in the ASA.

Therefore this little bit of media mindbending will go unchallenged - and another assault on our democratic rights and free speech will have been allowed to slip under the radar.

A poster ad for a children's charity that showed two black teenagers harassing a white man reinforced negative stereotypes and was therefore "racist", the advertising watchdog has ruled.

The Advertising Standards Authority also found that another billboard ad for the Kids Company charity that stated "You are right – kids who can kill really are wrong in the head" beneath a picture of four black teenagers was likely to cause offence.

In addition, this ad made misleading claims about a supposed link between emotional development, brain size and violent behaviour, the ASA said.

Both ads were judged to be in breach of the ASA's code on decency, with the one featuring the claims about brain size also falling foul of clauses on truthfulness and substantiation.

The ASA conceded that Kids Company meant to raise awareness about the children it sought to help, but nevertheless ordered the charity not to re-use the ads, two out of five used in a poster campaign.

In its defence, the charity said the campaign as a whole had used a cross-section of local children from different backgrounds in and around Kilburn, north London.

According to Kids Company, the racial mix was representative of the children from the youth clubs in that area, with 80% of the children that came to it for help from Afro-Caribbean backgrounds, a proportion that was again reflected by the ads.

The Outdoor Advertising Association said it had cleared the ads as they contained both black and white children and were spread as evenly as possible across nine different stations.

Kids Company's ads were designed to "confront superficial judgments and prejudices" and challenged the viewer to reject stereotypes, the charity added.

However, the ASA found that this ad "focused on a negative image of black teenagers that was likely to reinforce negative stereotypes and was therefore racist".

The watchdog also said the ad linking violent teenagers to emotional underdevelopment "was likely to cause serious offence because it featured only black teenagers".

Kids Company said two images of the brain it used in this ad – one, larger brain was labelled "normal", while a smaller one was marked "extreme neglect" – had been taken from a US study on child trauma and brain development that demonstrated the effect of sensory deprivation on brain size.

However, the ASA said its interpretation of the study suggested it was referring to factors such as nutrition and children being raised in cages in dark rooms, not just to emotional development.

Moreover, the regulator rejected the idea that there was evidence that brain size had an impact on violent behaviour, as it found the ad had implied.

On both points, the ad had been "misleading", the ASA said.
Posted by Defender of Liberty at 11:18

I would like to know if the ASA considers itself to be the self appointed or rather Labour Government appointed arbiters of truth and reality and what should be seen and should not bee seen in the UK today.

I see that many images and posters place white at the centre of all crime and cheating.

This of course is insane as we in the real live world know the reality. But of course to place the white man at centre of this steroetyping isn't racist some how is it?