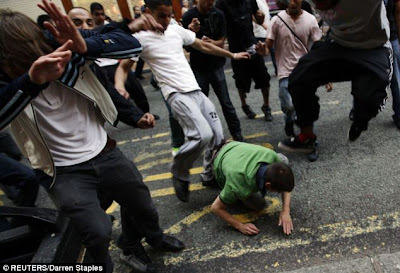 
This letter below says it all.

Finally a decent (ex) member of the UAF who has seen the light, that the aim of the UAF is to increase racial tension so it can profit from racial violence it incites and then use that racial violence as justification for its own pernicious existence.

No doubt this poor guy will now be targeted by the thugs of the UAF, abused and attacked for his bravery and honesty.

UAF protester 'sorry' rally got out of hand in Birmingham

Dear Editor, I would like to start by apologising to the people of Birmingham for the events of Saturday evening which I am highly ashamed to have been a part of. However, as a moderate who took part in the UAF protest I would like to set the record straight.

I, like the vast majority of people in Birmingham love the fact that our city is so diverse and vibrant. I felt that this was worth defending, especially from a bunch of trouble makers many of whom were from outside the city.

Unfortunately it turned out the UAF were no more interested in our community than the racists many of us turned out to oppose!

The young Muslims who rampaged through the city streets were incited to violence by UAF activists. I was near the front of the rally in Rotunda Square and I saw how they worked and I saw how it got out of hand.

The UAF should have switched rhetoric when they saw that the young Muslims were getting restless and angry. Instead what they did was get increasingly aggressive speakers to talk about ‘smashing the BNP’ (who not directly involved with the protest) whilst sending agitators into the crowd, with megaphones, to whip up anger there.

Only a few members of the Socialist Workers party, some trade unionists and a few moderate Muslim blokes who had been recruited as marshals on the day, remained to help the Police calm the riot.

I would like to commend the West Midlands Police Force for their sensitive handling of the protest and us protesters during what was a very difficult situation.

However, the ten or so members of the Muslim community who stayed with the protest whilst it was settled are the true unsung heroes of the sad event.

I never got to know their names, however, I am very proud to have worked with them in defusing the tensions that built up between rioters and Police. A true example of why our city is great.

As to the UAF well, I don’t mind announcing that I will never join one of their protests again. Once again I can only say how sorry I am that it all got so out of hand. If we had known how it would turn out then I’m sure a lot of protesters would have stayed home.

The UAF has achieved nothing except to create racial tensions were non existed before.

Posted by Defender of Liberty at 07:41

We you have to use `sensitive` handling, `community cohesion` from the start and now, then you know have have clear evidence that you lefties and liberals have built a failed society, so why continue with the socially destructive experiment against a protesting and abused population?

Because the plan is to destroy, clearly!

Lee, your country, as well as mine, is fucked.

How right you are phillip,

but at least we have ringside seats as the this Rome falls,

Out of the ashes of the old order,
Asises our liberty reborn,

Stop the World I want to get off!

(who not directly involved with the protest)

they weren't involve AT ALL

as for the 'sensitive policing'


the Police KNOW what the uaf DO