How to Shut Up A Black Radical With One Sentence 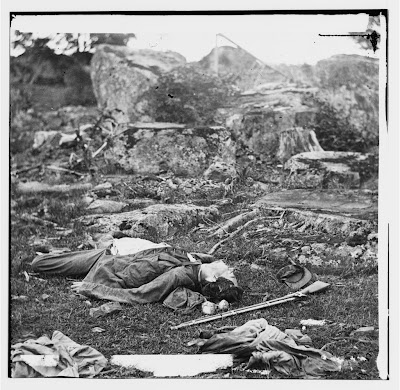 Image - They died so blacks could be free. Blacks today in America should be on their knees and give thanks every day for the whites who died so that blacks can live free.


The next time a Black leftist / white Liberal bangs on about whites are all inherently racist, that blacks are victims of white racism and that whites should pay reparations for slavery - then just remind them of this one little fact ;

Over 360,000 white people died in the American Civil War on the Union side in order for blacks to be freed from slavery.

Therefore Whites paid their dues for slavery with the blood just under half a million white men and women who died to free black slaves.

In fact Blacks in America should get down on their knees every day and give thanks for the hundreds of thousands of whites who died so they could be free.

Instead we have professional spongers and race relations extortionists demanding reparations - when the reality is that whites paid the historic bill for black slavery with their own blood.

The next time some liberal idiot calls America a 'racist nation' remind them of two facts ;

2) That todays Blacks owe Whites a debt that they can never repay - the debt of 360,000 whites dying so they can be free


The tragedy is that the reward for those hundreds of thousands of white deaths is that many ignorant Blacks in America now have a massive chip on their shoulder about 'racism' such as when a white woman is afraid when a gang of blacks appears when they walk the street at night.

It may be a hassle to have a cop pull you over if you are black - but when you are white and walking in a black area then you face being shot, raped, mugged and killed because of your race.

The white community of America was devastated first by the war of independence and then the Civil War. The South was ruined and impoverished - yet by the sweat of their own brow and by the strength of their own labour the South rose again.

Yet we do not see the same level of dysfunctionalism in the present white community even though the white community suffered far more long term social and generational trauma and damage than the black community ever did under slavery - the slaves simply stopped picking cotton, fathers simply picked up their kids and wives, moved elsewhere and carried on living. The slaves kept their families together as they did not die in the war, unlike the white families who were devastated.

It is the white community who were the primary victims of slavery - not the black community.

The white community was totally devastated by the deaths of the 690,000 men and women of both sides who died during the war - but the whites did not end up like the black community today.

Its just a pity most white liberals dont have to live in black areas or have to exist in the racialised US prison system where black gangs target lone whites for rape and violence simply because they are white - then they would know what real racism is.

( And here are some facts on Blacks owning Black slaves that the media and reperationists do not like to ever talk about ;

The former is unlawful, the latter entirely legitimate.


There is OFFENSIVE RACISM - which is where an individual of one race is attacked, vilified or abused by an individual of another race simply for them being a member of a specific racial group - and this is intolerable in any society.

But then there is DEFENSIVE RACISM - and this is where an individual is aware of the facts that a certain racial group is disproportionately involved in racial based criminality eg the vast epidemic of black on white rapes in America where 35,0000 rapes a year are perpetrated against white women whilst the number of rapes of black women by whites is around 10 - and therefore a member of the race who are the primary victims of that racial crime epidemic assumes a lawful and legitimate self survival strategy by avoiding contact with members of that racial ground in order to guarantee their own individual safety, or they assume that the presence of members of that group may represent a threat to them when they encounter them in the street.


Defensive Racism is also what Racial Profiling is, in that the police who are aware of the disproportionate involvement of a specific racial group in a specific area target members of that racial group in order to cut levels of crime and save innocent people from being attacked.

Racial Profiling is an entirely legitimate form of policing when the statistics reveal that one racial group is disproportionately involved in crime. In a democratic society it is the interests of the victims, and potential victims, that count - not the interests of criminals or political correctness.

Racial profiling is preventive - in that it seeks to stop the criminal committing the crime before they commit the crime and therefore it is in the interests of society, the victims and also the criminal themselves for racial profiling to be used as widely as possible. It is also in the interests of racial groups whose members are disproportionately involved in crimes to have those crimes prevented before they occur - as it is their sons and daughters who end up in prison for those crimes.

The shibboleths of political correctness are irrelevant.

Defensive Racism is simply a survival reflex and an anti-crime strategy designed to prevent victims being killed or attacked - and as such it is entirely legitimate when the crime figures reveal that specific racial groups are disproportionately involved in crimes.

According to the FBI Uniform Crime Reports for the years 1995 through 2000:

- The average Black kills a "White" 15.9 times more often than the reverse.

- Weapons violations are committed by Blacks at nearly 5 times the rate for Whites;

- Blacks are caught receiving or buying stolen property at nearly 5 times the rate for Whites;

- Blacks are involved in prostitution at almost 4 times the rate for Whites;

- Blacks are arrested for drug crimes at over 4 times the rate for Whites;

- Blacks are more than 3 times as likely to be thieves as Whites;

- Blacks are more than 4 times as likely to commit assault as Whites;

- Blacks are almost 4.5 times as likely to steal a motor vehicle;

- Blacks are more than 5 times as likely to commit forcible rape as Whites;

- Blacks are over 8 times as likely to commit murder as Whites;

- Blacks are more than 10 times as likely to commit robbery as Whites;

- Nearly 25% of all Black males between the ages of 20 and 29 are in jail or on probation - this does not include those wanted or awaiting trial;

- For all violent crimes considered together, Blacks are almost 5.5 times more likely to commit violent criminal acts than Whites; all this according to the FBI Uniform Crime Report.

"I will say, then, that I am not nor have ever been in favor of bringing about in any way the social and political equality of the black and white races - that I am not, nor ever have been, in favor of making voters or jurors of negroes, nor of qualifying them to hold office, nor to intermarry with White people; and I will say in addition to this that there is a physical difference between the White and black races which will ever forbid the two races living together on terms of social and political equality. And inasmuch as they cannot so live, while they do remain together, there must be the position of superior and inferior, and I, as much as any other man, am in favor of having the superior position assigned to the White race" - Abraham Lincoln, Fourth Lincoln-Douglas Debate, September 18, 1858, Charleston, Illinois, in Abraham Lincoln: Speeches and Writings (New York: Library of America, 1989), p. 636, and in Collected Works of Abraham Lincoln, Volume 5, page 371.

Why then the Civil War?

"This war would never have been possible without the sinister influence of the Jesuits. We owe it to popery that we now see our land reddened with the blood of her noblest sons. Though there were great differences of opinion between the South and the North on the question of slavery, neither Jeff Davis nor any of the leading men of the Confederacy would have dared to attack the North, had they not relied on the promises of the Jesuits, that, under the mask of democracy, the money and arms of the Roman Catholics, even the arms of France, were at their disposal, if they would attack us...

"Professor [Samuel] Morse has said to me of the plots made in the very city of Rome to destroy this republic,...[of] the priests, the nuns, and the monks, which daily land on our shores under the pretext of preaching their religion, instructing the people in their schools, taking care of the sick in their hospitals, [who] are nothing but the emissaries of the pope, of Napoleon, and the other despots of Europe, to undermine our institutions, alienate the hearts of our people from our Constitution, and our laws, destroy our schools, and prepare a reign of anarchy here as they have done in Ireland, in Mexico, in Spain and wherever there are people who want to be free" - President Abraham Lincoln, summer 1864, to his confidante and friend, Fr. Charles Chiniquy, as found in Fifty Years in the "Church" of Rome by Charles Chiniquy, Chick Publications, 1985, reprinted from the original 1886 edition, p 296-297.

Observe Lincoln's comments about the subverting of national institutions, undermining of the Constitution and the breakdown of law and order in order to play into the hands of "despots of Europe."

You don't have to look far to see how that is happening here and now, as Lincoln forewarned.

He also in the same passage warned that the Civil War could have become "a religious war, and...take a tenfold more savage and bloody character."

Mercifully, it didn't but you don't have to look far to see how and why such a conflict is now possible in the UK.

It is to be hoped that a BNP Government will ensure it never happens.