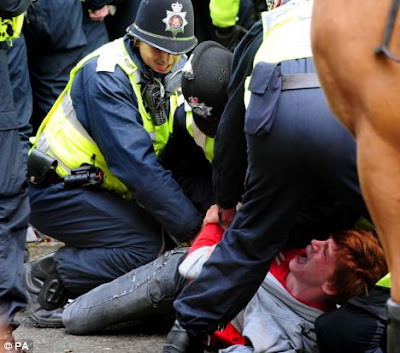 " Quentin wing mummy, wing mummy wight now ! Dont they know I am a twustifarian and I got to Oxford University. Get Uncle Woger on the phone wight away as he is a judge. Mummy, Mummy make the nasty policeman go away. All I did was throw a bwick in the pigs face "

News coming in that Jumping Justin one of the stars of the new BBC show Walk on the Wild Side, has been arrested at the RWB attacking the police.

If you look at the picture you can see the whining little pussy is actually crying.

Posted by Defender of Liberty at 13:27

I notice one thing is rather a common thread with these UAF supporters - they are broadly speaking kids.

In short the gullible, the ignorant priviledged and the plain moronic.

These people reprecent no one but the above mentioned groups.

Labour whip up the Hitler youth in the same way that Hitler whipped up the middleclass uni braindead.

These fools talk of workers and revolution, yet the majority will shun the very same group on reaching the real world and maturity.

all of them serve the NWO, capitilist greed led by the most priviledged of all.

all of them are racists, destroying a people and a culture no different to what was done to the Red Indians.

these people would have shoved the Red Indians who rejected the invasuion of the europeans in the gulags or worse, after calling the red indians racists and littles americans that is.

and these people claim to be anti racists and communists!

NWO puppets to the man, woman or thing.

It's all a big laugh to them innit, after all once theyve had their uni rebel without a clue phase they can move into their low crime ivory tower gated communities.

I have visited many mainstreme blogs after such UAF uni kids genocide marches and the result is the same - everyone laughs at them or loaths them.

still thanks for the publicity morons, many people will now enquire about joining the BNP if only to counter such uni morons, see kids, it's NOT cool in the real world to be a uni moron claiming to be a communist, it's well known to be pathetic and every year you illustrait this fact with bells on, yep court jester bells.